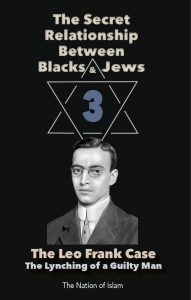 The Nation of Islam
The Secret Relationship between Blacks and Jews, Volume 3: The Leo Frank Case
Chicago: Latimer Associates, 2016

One can read a review of the first two volumes of The Secret Relationship between Blacks and Jews here [2].

All racial integrators – all those who “don’t see race,” are “colorblind,” and view “all humanity as family” – tend to misread data. In fact, they misread data in a big way, but because these colorblind integrators are well within the norms of today’s decadent society, they don’t get much in the way of pushback. On the other hand, The Nation of Islam [3] (NOI) does get plenty of pushback. The Nation of Islam also sees race.

But NOI doesn’t misread data. As far as black organizations go, it is actually run by blacks – unlike the Jewish-run NAACP, in the latter’s heyday. It doesn’t endorse integration or other forms of race-mixing. NOI also doesn’t commit acts of terrorism, although there was a nasty series of murders by some criminals inspired by the NOI’s message in the 1970s [4]. The NOI isn’t into mooching, and its members don’t participate in typical ghetto crime.

In the third volume of The Secret Relationship between Blacks and Jews by NOI historians, we discover that the NOI isn’t hostile towards white Southern culture or the Confederacy. An example of this non-hostility is how the NOI refers to Confederate Memorial Day. The NOI writes that this is a holiday “in honor of the dead and aging soldiers who had fought with valor but in vain to maintain America’s most profitable economic institution[1] [5] – Black slavery”[2] [6] (emphasis mine). This sort of sentiment is not unusual even among neo-Confederates. Additionally, the references to Nazism that become obligatory when discussing the Jews run somewhat close to the ideas found in “revisionist” literature. For example, “Adolf Hitler purportedly [7] turned [eugenics] against the Jews”[3] [8] (emphasis mine). And the NOI is highly sympathetic to the white victim Mary Phagan and her family; there is no “get the Becky [9]” that is so prevalent in the mainstream media today. The NOI “spews” less hatred than The New York Times or the NBC Nightly News.

This volume describes the Leo Frank case in depth. Leo Frank was a Jewish factory manager[4] [10] at the National Pencil Company in Atlanta, Georgia. Frank was a highly-regarded pillar of both upper-class Atlanta society and the local Jewish community. Leo Frank also had a number of hobbies. One was being the President of the local B’nai B’rith Fellowship – a Jewish fraternal organization. Another was to engage in sexual escapades with his female employees in his factory office. He was a #metoo sort of Jew, something which seems to be somewhat common among male Jewish managers. 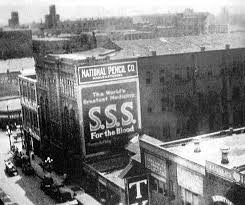 The National Pencil Factory around the time of Mary Phagan’s murder.

On April 26, 1913, Frank raped and murdered a young, white Southern girl named Mary Phagan, then 13, during a sexual escapade “gone wrong.” The Atlanta Police Department arrested a number of people during their investigation, including the black night watchman who discovered the body and the factory’s black janitor. At a time when Jim Crow social policies ruled in the South, the lynching of black men was tolerated and open racism was considered a virtue; an all-white jury convicted Frank – although Frank was “white” from the perspective of the NOI and wealthy by anyone’s perspective. On the night of August 16, 1915, Frank was taken from prison and lynched the next day in Phagan’s hometown, allegedly by Georgia’s white political elite.

This reviewer won’t do a deep-dive into the evidence in this case. To get the technical, legal, and forensic specifics, one should read this book, or read the transcripts of the trial. The book is probably the better option, as it has very good illustrations of the prosecutor’s scenario, the defense’s counter-scenario, and the actions of the prosecution’s star witness, James Conley, the janitor who was nearest to the murder apart from Frank and Phagan themselves.

This is an overview of the case:

So what can one learn from the Leo Frank case?

Legal Procedures are Easier in a White Ethnostate

If the trial had taken place in an all-white area in, say, northern Ohio, it would only have been remarkable in that a person of such high social class and community standing raped and murdered an employee. Such murders do happen, of course, and in a homogeneous society, the trial and punishment would have been a private catastrophe for those close to the victim and the accused, but not traumatic at the community level. In Leo Frank’s case, it became one of tribal politics due to Frank’s defense strategy. At first, Frank’s strategy was that of an innocent “white man” accused of a “Negro crime.” Frank accused two blacks, especially James Conley. When that failed to work, the case became one of Jewish donors and media moguls employing expensive legal tricks and cries of anti-Semitism to get Frank off. Mary Phagan in turn became emblematic of endangered Southern culture. 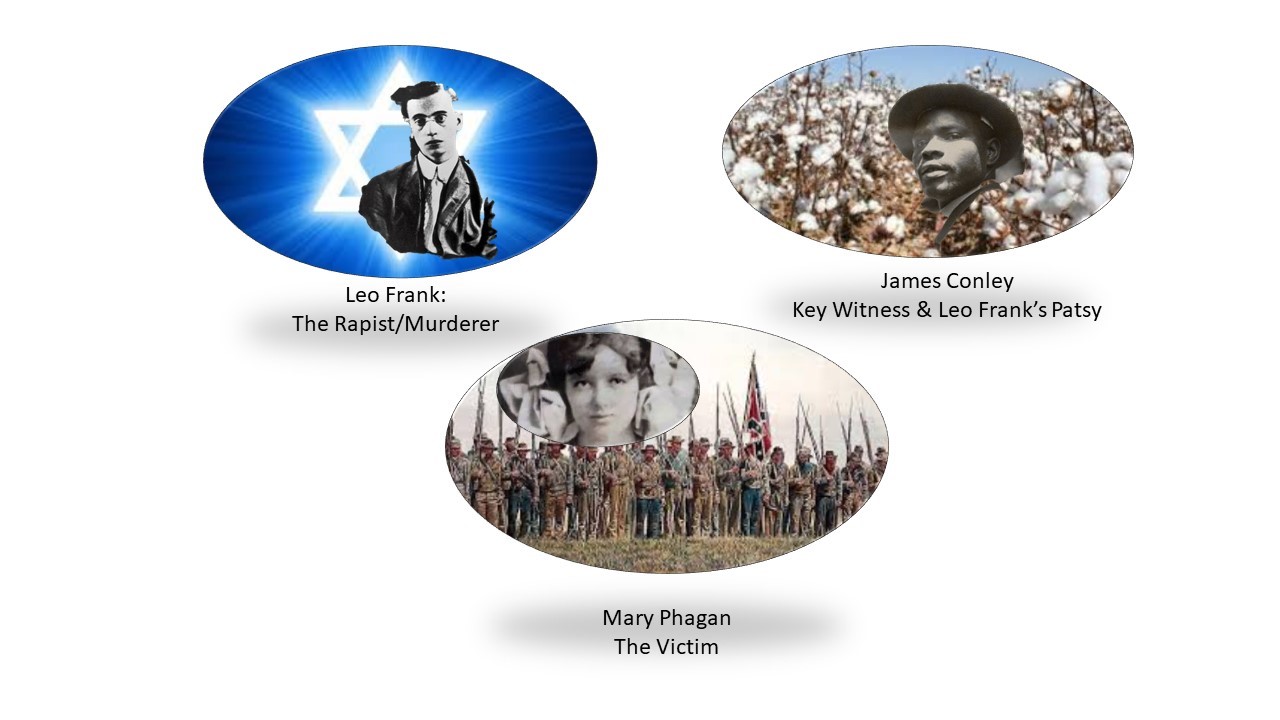 The Leo Frank Case Took Place in a Philo-Semitic Environment

The Southern United States is the most philo-Semitic region of the nation. In the past, it was even more philo-Semitic. The first Jewish Senator, David Levy Yulee, was from Florida, and he was an active supporter of the Confederacy and its President, Jefferson Davis. Another Jew, Judah Philip Benjamin, was a senior Cabinet member in the Confederate government. Jewish mercantile power was an established fact of life in Atlanta. And Jews weren’t respected only for their prominent niche in the Southern economy. “Bible toting Georgians had always held their Jewish neighbors in high regard . . .”[5] [13]

The prosecuting attorney in the case, Hugh M. Dorsey, “was not an anti-Semite, nor was he operating in a previously existing anti-Semitic climate. Attacks on Jews had not been used in the past to gain popularity or public office.”[6] [14] Furthermore, “Jews across the South were well entrenched in a Jim Crown court system that they helped develop and on which they relied for their everyday business needs.”[7] [15]

Frank’s defense strategy was based on the assumption that Southerners would not believe black testimony, such as that of the state’s star witness, James Conley, and further that they would only believe that such a brutal crime could be carried out by a black. For those who are racially aware, it turns out that all-white juries, such as was the case in Leo Frank’s trial, can see the evidence through racial invective, even though they might support a system such as Jim Crow. When Frank was convicted, the charges of anti-Semitism began.

The Cry of “Anti-Semitism” and Southern Pushback

Anti-Semitism began to be invoked only after Frank’s conviction, and it was mostly led by Northern Jews, especially at The New York Times, which was then owned by Adolph Ochs. Another prominent Jewish Frank supporter was the advertising executive Albert Lasker. The book goes on to say:

Author Steve Oney, for instance, represents most of the writers in the field when he calls the Leo Frank affair “America’s worst case of anti-Semitism.” Few have dared to challenge that view, but a far more supportable conclusion is that hatred of Jews or of Judaism was not a motivator or a factor in Leo Frank’s prosecution; rather, the specter of antisemitism was more the invention of Frank’s supporters and later writers seeking to create Jewish American folklore instead of endeavoring to analyze the facts of the case.[8] [16]

The campaign to claim that Frank was a victim of “anti-Semitism” made Georgians seem like monsters in the North and around the world. “The layers of evidence that convinced a jury of white men of Frank’s guilt in the murder of Mary Phagan, overwhelming as they were, simply never made it out of Georgia,” the book tells us.[9] [17]

Furthermore, Frank’s Northern Jewish supporters bribed, or attempted to bribe, witnesses throughout the trial and its aftermath. They also hired dishonest private investigators to sew doubt about Frank’s guilt among Atlanta’s law enforcement community. These supporters searched high and low for new witnesses to provide an alibi for Frank. This effort was ongoing as late as the 1980s. And as Frank’s prison accommodations were actually quite nice, it is likely that his jailers were also bribed.

The resistance to this massive Jewish onslaught came in the form of a prominent white Southerner named Thomas E. Watson. While a Congressman, Watson implemented the Rural Free Delivery policy, a significant reform that is still in place today. Watson was also an editor and business manager of several publishing concerns. Seven months after Leo Frank’s trial and the associated “J’accuse [18]”[10] [19] nonsense coming from the Northern Jews, Watson put the State of Georgia’s case into print. It struck a chord throughout the South. Had it not been for Watson, it is likely Frank would have been eventually set free through a series of clemencies, and Mary Phagan’s rape and murder would have been unavenged.

The Leo Frank case is peculiar in that the organized Jewish community didn’t need to weigh in on the case at all. One can only conclude that they are highly sensitive to budding ethnic threats and that these sorts of cases are something like the proverbial canary in the coal mine. When such a canary “died,” so to speak, with Frank’s conviction, Jews came to believe their place in the South was not as secure as before.

There are other aspects to the Leo Frank case which shine light on the Jewish view of their Gentile host societies. While this is speculation, I believe they have the ring of truth:

In the end, the Leo Frank case is the exact moment when the Jews came to hate the South.

[1] [22] I don’t know if slavery was America’s most profitable economic institution or not. Slavery plus cotton was extremely profitable in the 1850s, enough so that the South didn’t suffer during the economic downturn of that era in the way the North did. However, slavery was profitable enough that a great many people fought very hard to maintain it.

[4] [25] Leo Frank’s actions match a pattern of callous behavior by Jewish managers, from Harvey Weinstein to Max Blanck and Isaac Harris. Blanck and Harris were the Jewish managers of the Triangle Shirtwaist Factory, which burned down in 1911. Blanck and Harris escaped from the building, but left the doors locked and failed to issue any warning to their workers. More than a hundred people working at the sweatshop perished in the blaze.