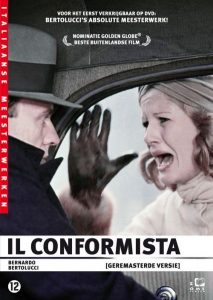 Reputation-wise, Bernardo Bertolucci (1941-2018) missed a good bet by not dying a quarter-century ago, rather than lingering on for years of illness and diminishing fame. Orson Welles spent his lengthy dotage introducing himself to new generations as a pitchman for Paul Masson wine [2], and that seemed pretty sad, but at least people knew who he was. When the equally talented Bertolucci died on November 26, he had almost no public profile at all.

“Director of Last Tango in Paris Dies at 77,” said The New York Times, damning him with his most memorably lurid, and memorably mediocre, film. Most obituaries and film columns remembered him for that, and his Oscar-sweep for The Last Emperor in 1987.

Twenty-five years ago, Bertolucci was still front-and-center in the popular consciousness. If his latest, early-’90s films were perverse and inaccessible (The Sheltering Sky, Little Buddha), that didn’t matter. The Last Emperor Oscars were a recent memory, and his signature works of the 1970s (The Conformist, Last Tango, 1900) still stood tall in the cultural landscape, even if critics regarded them as self-indulgent. The reputation of Tango will forever be tarred by the anal-rape-with-butter scene, as well as fatuous interviews that stars Marlon Brando and Maria Schneider gave during the movie’s opening in late 1972. 1900 came out in 1976, and is probably the longest feature production ever released. It starts out with a man screaming that Giuseppe Verdi has died, and goes downhill from there, wandering all over the place for over five hours of political passion and manure, along with the most coprophagy you’ll see outside of Pier Paolo Pasolini’s Saló.

But then we come to The Conformist (1970), endlessly gorgeous and influential. For a film historian, the Bertolucci of this period is intriguing because of the cross-fertilization that went on between him and director Francis Ford Coppola. They became friends right around the time Bertolucci was making The Conformist and Coppola was doing preparatory work for The Godfather.

Visually and musically The Conformist is very similar to The Godfather (and The Godfather Part II), for the very good reason that Coppola cribbed ideas from his friend. You have scenes in dim, dark-wood rooms; Venetian-blind shadows; musical crescendos behind shots of fallen, drifting leaves. People often think that Coppola gave his Godfather films a vague “Italian movie” look, but what he really did was copy The Conformist.

The two directors also shared some actors in those ’70s films. Bertolucci and Coppola both use Brando (in The Godfather and Last Tango) and then Robert De Niro (Godfather II and 1900) during De Niro’s brief, glittering zenith as a bankable, international leading man. (The only other one at the time would probably be Gérard Depardieu, playing opposite De Niro in 1900.) My favorite shared talent, though, is Gastone Moschin, the comic-relief thug who portrays Special Agent Manganiello in The Conformist, and then, a few years later, turns up in The Godfather Part II . . . playing a similar role as Fanucci, the Black Hand capo whom the young Don Corleone (De Niro) kills.

Like most Italian and French auteurs, Bertolucci was a very character-driven director. He didn’t really do plot, in the sense of having some overarching quest or chase that holds our attention. His people don’t have much agency; they’re passive actors, victims of history and random events. The usual Bertolucci technique is to have characters discover each other, talk or kiss or fight; and let a story unfold from there. Some directors and screenwriters (e.g., David Mamet) consider this a wretched way to make a film; plot must be the priority.

For Bertolucci, the technique worked pretty well, so long as he had a basic narrative to work from (a novel, say). But his fatalistic outlook meant that he sometimes ended up telling a very different story from the original text. This is what happens in The Conformist, based on a novel by Alberto Moravia. Moravia was part-Jewish with Fascist family connections, and his somewhat surreal, episodic novel was intended as a kind of apologia for his family’s politics. Bertolucci takes the broad outline of Moravia’s story, but subverts the novel’s plot and intent.

Most thumbnail descriptions of the film are very bad; they really describe what the novel was supposed to be about. An example, from IMDB [3]:

A weak-willed Italian man becomes a fascist flunky who goes abroad to arrange the assassination of his old teacher, now a political dissident.

But that’s not really the plot of the film. The film’s anti-hero, Marcello (Jean-Louis Trintignant), a Roman civil servant, is devious, but not particularly weak-willed. He wishes to call on his old philosophy Professor, an anti-Fascist currently in exile in Paris. He uses the pretext of a honeymoon trip to visit Paris, and meantime alerts the Fascist intelligence services that he’s willing to report back to them. He’s covering all his bases and saving his job, you see, in case someone gets suspicious. And then, when Marcello gets to Paris, the Professor tries to test him by asking him to mail a confidential letter, but Marcello spots the ruse and refuses, thereby assuring his old teacher that he is not, in fact, a Fascist spy.

That’s all confusing enough for the core plot. But then Marcello forms a passionate interest in the Professor’s young ballet-teacher wife (Dominque Sanda), though she seems more interested in Marcello’s new bride, Giulia (Stefania Sandrelli). The setting of the film is 1938, but the subdued kinkiness was put in for 1970-style spice.

And Marcello’s little spy mission is expanded. His handlers order him to kill the Professor. This was never part of Marcello’s plan at all. When the time for the murder comes, after a long cross-country pursuit, Marcello won’t get out of the car. He watches impassively through the car window as some Fascist henchmen kill the Professor and his wife in the snowy hills of Savoie. This cold-blooded set-piece doesn’t make an awful lot of sense; up until now, Marcello has been a sympathetic figure. Bertolucci presumably added the scene to give Marcello one token instance of villainy.

The script is convoluted, and stuffed with flash-forwards and flashbacks, and even flashbacks-within-flashbacks. Then, on top of these other distractions, you have the film’s architectural-travelogue beauty, shot in blue-greens like a 1930s Ektachrome slide. Nevertheless, its narrative is tighter than the novel’s. The book strains to make some vague, didactic point about the attractions and pitfalls of Fascism. In the novel, Marcello suffers from obsessive thoughts that make him seek the protective cover of utter normality. Hence, a “conformist.”

But this is very abstract, a hard thing to get up on the screen. (Perhaps a Jacques Tati comedy?) So instead of a cowardly conformist, Bertolucci gives us a priggish haute-bourgeois with an overwhelming disdain for degeneracy. Marcello’s mother is a rich junkie who gets morphine and sex from her Japanese chauffeur. His embarrassing father (a wife-and-child abuser in the novel) is an early Fascist Party supporter who’s gone insane. Marcello looks down his nose at the slimy Fascisti he has to work with, just as he has utter contempt for Italy’s new Nazi allies. The film’s Marcello isn’t a weak-willed worry-wart, he’s a snobbish Don Quixote, a foppish dude who wishes to clean up Dodge.

This elegant and influential motion picture did not get wide distribution in America, and is virtually unknown outside the art-house and film-critic communities. For many years, there was neither a quality English-dubbed version, nor (preferably) a good subtitled edition. This has changed in recent years with the issue of a revised, “extended” cut.

Some of the bad translations in the original release were comical. For example, when Marcello tells his wife about his old Professor, he recalls that the students thought him a divine fool: “We called him Smerdyakov,” says Marcello (in Italian).

The subtitle translators presumably had a working knowledge of Italian, and French, and English, and some German too; but they didn’t know their Dostoyevsky. And they must have really puzzled over this one, because in the end they came up with the English subtitle: “We called him shithead.”