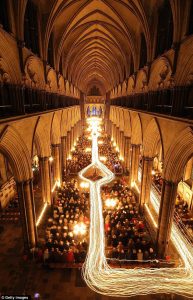 Evensong drifted in wisps of blue incense down the shadow-columned nave as I cast my eye over the gold Garter Banner fluttering overhead. My attention was drawn to the apsidal chancel and fourteenth-century vaults, with their red and turquoise fronds that stare benignly down on the heads of the Schola Cantorum choristers, their angelic voices echoing off the chambered underbelly of the Romanesque cross tower. A mass of mesmeric candles flickered over the polished, bone-like surface of the reliquaries in the chantry chapels of the DeSpensers, Beauchamps, and de Clares.

There were stones that still held memories of Mercian Earls like Oddo and Doddo, or that made up Theoc’s missionary cell on the gravel spit at the confluence of the Severn and Avon rivers, or which had seen the Saxon Thegn Brictric’s dispossession by Matilda, the wife of The Bastard, William the Conqueror.

Before me, a veritable lattice forest of hand-carved oak was imbued with the sweat and screams of slaughtered Lancastrians, who had once sought sanctuary within the cloisters beyond the thin veil of the metal silhouette that was cast out before the Abbey’s gates, leaving those that mourned them to commemorate their violent passing by embedding battered shields and helmets in the sacristy door.

These bloody scenes were followed only a few hard centuries later by the melting of bells and the stripping of altars when Welsh Henry’s second son defied the Pope, leading to the cultural tsunami of the English Reformation, which swept away the ornate trappings of the old and ushered in the stern and somber face of the new. Wall hangings were slashed; idolatrous paintings torched; rood screens torn up by their roots; tombs with prayers to the dead etched upon their smooth surfaces smashed with hammers; and libraries like those of Worcester Abbey, the Friary at York, and Oxford University – where illuminated texts that had taken years of laborious and loving work to create, some no doubt as precious as the Lindisfarne Gospels – were turned to ash in a Taliban-type orgy of iconoclastic proportions.

Nevertheless, forever rising in defiance of plague, pestilence, and famine, the ageless responsorial and antiphonal Plainsong rose from the stalls in the choir. The castrato ensembles were parting their lips on Latin verse, open mouths sounding the rhythmical neumes from the Liber Usualis, the Salve Regina, and the Honor Virtus et Potestas. These were a mnemonic echo of the Missa de Angelis and Missa Deus Genitor Alma, sung in the Monastery of Metz in northeastern France, the Santa Sofia church in Benevento in southern Italy, the Blazen Muze performed by the Pravoslavnye Pevchie singers from faraway Moscow, and the Greek Kyrie chanters who follow the Byzantine tetrachord traditions of Isidore of Miletus’s Hagia Sophia and the Simon Karas school in Athens.

This is a living tradition that has lasted a thousand years, immortalized in works like the eleventh-century tonary of St. Benigne de Dijon, the Rosetta Stone of Plainchant, that enabled scholars like Jean-Louis Danjou to decipher the symbols on the parchments and in those dusty vellum volumes which had until then remained a mystery to all who studied them. So it was that, for the first time, the ductus of ancient neumes could be interpreted with a high degree of certainty, and so did the much-treasured text become, over time, the main source of the Rheims-Cambrai Graduate Romanum complectens missas of 1851.

Musicians like Franz Xavier Witt in Germany and Pietro Alfieri in Italy poured over the vida illuminations in books like the thirteenth-century Chansonnier, eucharists full of antiphons, psalms, and the Gloria Patri, filling our Western consciousness with thoughts of pious, sword-bearing Crusaders chanting the trobaire Marcabru’s songs while they rode in dusty columns into battle behind a burning cross:

Since the son of god summons you
to avenge him on the Pharaoh’s line . . .

to rescue Spain and Sepulchre,
you need to bear the brunt,
and drive the Saracens away
and crush their haughty pride . . .

Then, as now, we witness the treachery of the Holy See, with the thirteenth-century Languedogan jongleur and troubadour Guilhem Figuerra, who himself fell victim to the Albigensian Crusade, pointing out in his most famous hymn, Sirventes contra Roma, also known as D’un sirventes far, the short-sightedness of the Papacy’s internecine struggles against the Cathar heretics:

Treacherous Rome, avarice ensnares you
So that you shear too much wool from your sheep;
May the Holy Ghost who takes on human flesh
Hear my prayers
And break your beaks,
O Rome! You will never have truce with me,
Because you are false and perfidious
With us and with the Greeks!

Rome, to the Saracens
You do little damage
But to the Greeks and Latins
Massacre and carnage;

Rome, at the bottom of the abyss
You have your seat in hell

These were views and events that put me in mind of Charles Maurras’ pro-Catholic Action Francaise, which was proscribed by the Vatican in 1926; Pope Pius Xl’s pronouncement that “Catholic means universal”; Pius Xll’s declaration that “We are all one human race” in the Summi Pontifactus; the usurpation of the scriptures by the liberal-Left faction during Vatican ll in 1966; Protestant prelates like Rowan Williams, who attempted to appease the ever-zealous followers of Allah by suggesting that Sharia might be compatible with English Common Law; and Pope Francis going on one knee to wash the feet of so-called refugees.

These age-old self-defeating actions and contradictory sentiments caused me to ponder on the religious certainty of Corneliu Zelea Codreanu and his activism with the National-Christian Defense League, the Legion of the Archangel Michael, and The Brotherhood of the Cross in Romania; Joachim Hossenfelder’s Bewegung Deutscher Christen folk-church movement in pre-war Germany; the Catholicism of José Antonio Primo de Rivera in Spain and Jean Ousset in France; Franco’s column of death bulldozing Republicans in revenge for the murder of priests and nuns in the Asturias; Rosine de Bounevialle and her League of Empire loyalists in England; Julius Evola’s “pagan Imperialism”; Adrien Arcand’s love of liturgy in his little village of Lanorai in Canada; and claims by close friends and colleagues like Anthony Gannon, himself a graduate of the Brothers of St. Francis Xavier of the Jesuits, that Francis Parker Yockey considered himself a “Gothic Catholic” and often quoted the catechism.

And, so, turning to leave, the leather rosary cord slipping through my fingers, polished beads bouncing on the aisle’s colored tiles, my footsteps passed over the Latin memorial brass to Edward, Prince of Wales, set in the floor between the choir stalls under the tower, which reads:

(Here lies Edward, Prince of Wales, cruelly slain whilst but a youth. Anno Domini 1471, May fourth. Alas, the savagery of men. Thou art the sole light of thy Mother, and the last hope of thy race.)

I thought of James the First of Aragon, brought up by the Knights Templars, who wrote in his Llibre dels fets (Book of Deeds) of how a battle against the Muslims in Majorca went badly until the shouts of “Santa Maria! Santa Maria!” rang out across the field, energizing his troops with the spirit of Saint George to fight on for victory. He likewise relates that, after his triumph at a siege in Murcia, his troops were “thanking Our Lord God for the grace he had done us, and we knelt, crying and kissing the ground.”

As I walked forlornly past the seventeenth-century Milton organ of the amber-tinted sandstone abbey, I reminisced about the a cappellas that have washed over the royal blood below my feet. There was a cascade of vocal cadences that embodied the sacred synthesis of Carolingian and Gallican four-, eight-, and twelve-mode monophonic music, which has passed with the winds of time over the sarcophagi of historic figures like Charlemagne, buried under the pilasters of the west tower in Aachen; Richard the Lionheart in Fontevraud; Raymond of Burgundy in Santiago de Compostela; Peter the Hermit, who led the First Crusade and cleansed the Rhineland of usurers, in Neufmoustier Abbey; and Ferdinand and Isabella, joint conquerors over the Nasrid dynasty, the last Moorish kingdom of Al-Andalus, in the Royal Chapel in Granada.

These were monuments and music whose message transcends time, words and recitations that speak of heartache, devotion, and glimpses of the sublime. These were hexachords that whispered harmoniously across the face of icons like that of St. Nicolas in Radomsyl castle in Ukraine, the milky white marble of the Pieta in Saint Peter’s Basilica, the lichen-bearded serpent gargoyles that adorn the walls of Krakow’s Wawel cathedral, and the leering loll-tongued Green Man and eagle-hunting snake motifs in Canterbury cathedral. In their turn, they look down over the rook-nested rooftops of the college green and the bent, timbered alleyways of the old town. I peered inquisitively into cobbled corners that lie forever in mossy nooks and crannies, where the children of wealthy wool merchants once held hands and sang ring-a-ring of roses without really understanding the serious symbolism of the game they were playing.

My heart is forever searching for a religion that calls out to my race-soul and offers meaning to a people who still wander in the wilderness, one such that the sacrificial gunshot at the altar of Notre Dame de Paris by a brave and resolute martyr like Dominique Venner will not have been in vain. The true meaning of festivals like the Dark into Light annual procession in the precincts of Salisbury Cathedral will perhaps ignite into a towering beacon that will once again burst into flame, warning cities, towns, and villages across the length and breadth of this and other lands that the hordes of Hell are at our gates, and that this is no time to turn the other cheek – but rather to ring the church bells, buckle our armor, and prepare to chastise the infidel.