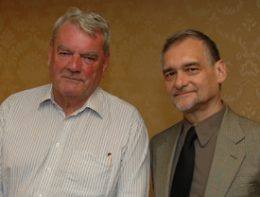 On Saturday, March 23rd please join us for the 12th meeting of The Northwest Forum. We will be proudly hosting two men who, put together, have been banned from more countries than I can count on one hand, for the crime of raising uncomfortable questions about the Second World War.

The inspiration for this lineup is the essay, “The Myths we Live By” from Jef Costello [5] at Counter-Currents.

No one doubts that there were atrocities committed on both sides during WWII, but why is it that Hitler (and not Stalin or Mao) is uniquely cast as the epitome of evil?

Why is it the Holocaust is not treated as one of many regrettable historical tragedies (like Holodomor or the Armenian Genocide and so on)? Instead it has become a tool to suppress any form nationalism or identity politics for white people. While any other people group is encouraged to feel collective pride for its achievements, the only sense of white identity permitted to us is guilt for being white.

About the Northwest Forum

In 2016, The Northwest Forum began as a place for real-life networking and education among White Nationalists. In 2017, we met nearly every other month despite multiple sabotage attempts. In 2018, we continued to meet frequently and began to add informal cultural activities such as the Ezra Pound birthday dinner, Italian Futurist New Year’s Party, and Forum Film Fridays (now Forum Film Sundays, “FFS” for short).

In 2019, we’re continuing to organically develop social and professional bonds between participants and increase our cultural literacy. But it’s important to note that we’re also a pop-up book shop. Founded by Greg Johnson as a Counter-Currents project, we have always had and will always have Counter-Currents titles. In fact, if you live in Seattle, despite the Amazon ban, you can probably still get your hands on a copy of The White Nationalist Manifesto within two days (or probably even same day . . . take that Prime!). In December, we added titles from Arcana Europa Media [6], and now in March, we’ll bring favorites from Focal Point Publications [7], home of David Irving’s works.

Plenty of words have been spent on the complaint that white identity politics is silenced by the establishment.  But we reject a victim mentality. We are creative and tenacious. The Amazon ban is simply another sign that they are growing frantic. The universities, the SPLC, the ADL, and so on are working at 100% capacity to silence people like Greg Johnson, Jared Taylor [8], Mark Weber, and David Irving.

Yet somehow, more people continue to find white identity politics. There are more conferences than ever before in places like New York, Tennessee [9], the good ‘ol Pacific Northwest, London, Holland, Estonia, Finland, Ukraine, Lithuania, Sweden [10], and too many more to list.For every explicit White Nationalist, there are a hundred others who agree in private.  White identity politics is inevitable [11]. Our job at the Northwest Forum is to bring those people together.  We build alternative spaces. We “read banned books.” [12][1] [13]

For general location, precise time, and to register, please RSVP to [email protected] [14]. For the safety of all participants, we adhere to a strict vetting process for all first-time attendees. Friends, family, and kids are welcome — please contact the organizers for details.

[1] [15] Anyone with a social media account and a few minutes to spare could really have a lot of fun with this.