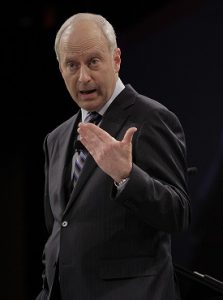 The rise of nationalist populism has shaken the globalist establishment far more than the rise of Islamic radicalism did in the 1990s and after. Muslim terrorism merely encouraged globalists to bring more “moderate” Muslims to the West to show undisturbed confidence in the value of diversity. The more Muslims have bombed the West, the more power “moderate” Muslims have gained by way of grants, affirmative action, spread of businesses [2], regulations against “Islamophobia,” and endless eulogies about their “indispensable” contributions. What globalists abhor are whites who affirm their national identities and call for limits to immigration. When a lone White Nationalist commits a terrorist act, the entire white race is condemned [3] without a single journalist caring to write a story about a potential “backlash” against “moderate” white identitarians.

Even for neocons, the enemy is no longer Islamic radicalism. The post-9/11 hysteria is over. Right and Left-wing globalists are now singularly focused on defeating the “xenophobia and strident nationalism” of white populist parties. The Right side wants to talk a bit more about the drawbacks of “high levels of immigration” as a way of defusing the “anti-immigration sentiment [that] was crucial to the election of Donald Trump.” These words come from David Frum, a key advocate of the destruction and maiming of Iraq in 2003. 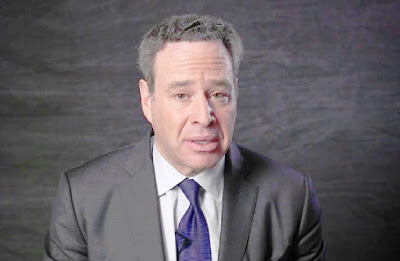 He calculates that “reducing immigration, and selecting immigrants more carefully [5]” will facilitate the transformation of formerly white nations into racially diverse nations with greater ease while disenfranchising the “fascists” who would like Western nations to remain majority European. A “staunch supporter of Israel [6],” Frum believes it is possible to defuse white populism through carefully orchestrated sloganeering about “reduced immigration,” hardworking immigrants who make white nations prosper, and immigrants who commit “less crimes” than native whites. 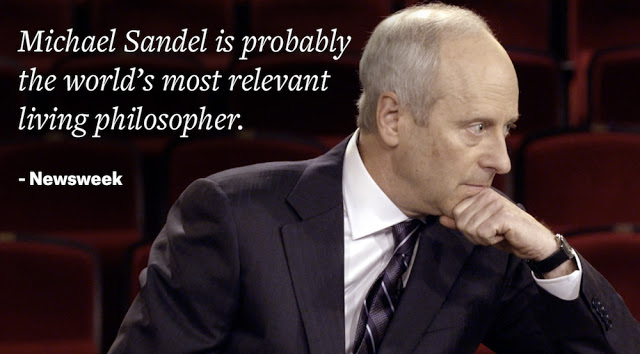 I believe in diversity and hate European populism, and that makes me profound and original.

But it is the Left-wing strategy I like to examine here via an examination of a generic article by another supporter of the racially nationalist state of Israel, Michael Sandel, with the title “Right-wing populism is rising as progressive politics fails – is it too late to save democracy? [8]” This article regurgitates standard Leftist ideas reframed to defeat a new phenomenon: white populist movements. Sandel has long been known as a liberal theorist. Like many academics, he carries a big title, “Anne T. and Robert M. Bass Professor of Government Theory at Harvard University Law School.” Wikipedia informs us that his course, “Justice”:

. . . was the university’s first course to be made freely available online and on television. It has been viewed by tens of millions of people around the world, including in China, where Sandel was named the “most influential foreign figure of the year.”

Odd, but true: Sandel is “a phenomenon” in China, “greeted by vast crowds,” with a popularity “usually reserved for Hollywood movie stars.” Sandel loves the Chinese back, advising this racially homogeneous nation (where immigration is prohibited and eugenics is a state program [9]) on how it should use its ancestral moral Confucian values to adorn its capitalist practices.

For Sandel, the most ominous threat to “liberal democratic values” are whites who wish to limit immigration and who have pride in their cultural ancestry. Like every other academic clone, he assumes the Western liberal tradition demands that all white nations must be diversified, and that any white who questions diversity is inherently a Nazi planning to gas six billion immigrants. “These are dangerous times for democracy,” he warns. “Hungary and Poland” are too proud of their ancestral identities and are not willing to accept millions of Muslim immigrants; they are “falling into authoritarianism,” their governments and the majority of their people are reluctant to embrace the enriching diversity of Paris [10] and Lost Angeles [11]. 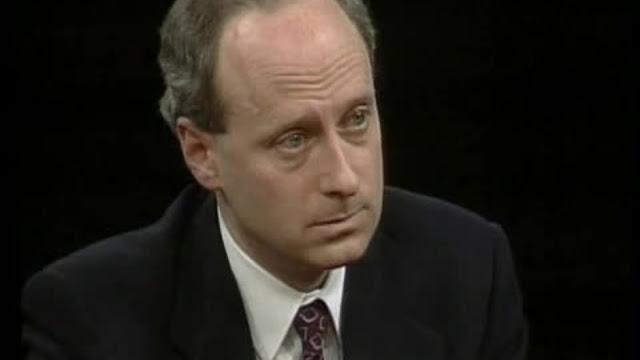 But for Sandel, it would be a mistake to condemn this “anti-immigration backlash” as “racist” without understanding “the complacencies of establishment political thinking that opened the way to Trump in the US and to right-wing populism in Britain and Europe.” It would be “a mistake to see only the bigotry in populist protest, or to view it exclusively as an economic complaint.” The ascendancy of Right-wing populism was a result of the “failure of progressive politics” to mount its own populist socialist movement.

The Democratic Party in the United States has become a party of a technocratic liberalism more congenial to the professional classes than to the blue-collar and middle-class voters who once constituted its base.

The Left across the West failed to promote stronger socialist policies challenging the Right-wing arguments that “market mechanisms are the primary instruments for achieving the public good.” It failed to develop a socialist-driven version of globalization against the “market-driven version” of the conservatives, leaving Western workers susceptible to Right-wing populism.

We are supposed to believe that if only Leftist parties in the West had pushed socialist populism further, rather than caving in to the Reagan-Thatcher reaction of the 1980s and embracing the promotion of “market-driven” global trade agreements during the 1990s, as well implementing cutbacks in welfare spending during the Clinton years, things would have worked just fine. If only Barack Obama had not “bailed out the banks on terms that did not hold them to account for the behaviour that led to the crisis and offered little help for ordinary citizens who had lost their homes,” but had instead promoted higher spending on black schools, higher wages for whites, higher welfare for everyone, and further environmental regulations, white workers would have quietly accepted their replacement by foreign immigrants.

These observations are completely out of tune with the actual historical data. Socialist populism, for one, was common across the West before the 1980s (never mind for the moment Obama’s claim that he was a real populist [14]). The data “shows that public spending increased remarkably in the 20th century [15], as Western governments started spending more resources on social protection, education and healthcare.” The Reagan-Thatcher governments were a reaction against out of control government debts and stagflation [16], and even these reactions did not stop the growth of governments. Left-wing populism was the force behind “the steep growth of social spending in the second half of the 20th century [which] was largely driven by the expansion of public funding for healthcare [17] and education [18].”

Could this populist “steep growth of social spending” have continued at an even higher pace without the Reagan-Thatcher slowdown, notwithstanding the fact that between 1964, when Lyndon Johnson declared the “war on poverty,” and 2012, after Obama’s first term, the “federal government spent roughly $12 trillion fighting poverty, and state and local governments added another $3 trillion [19]“? How can the Left be blamed for not being socialist enough after such massive government expenditures pursuing equality?

Left-wing Populism in the Age of Diversity

Since Sandel is a socialist who favors diversity and thinks that minorities are held back by white racists, the renewed populist movement he has in mind involves even higher proportions of social spending earmarked exclusively for blacks and immigrants, notwithstanding the fact that these two groups have been the disproportionate beneficiaries of welfare at the expense of whites [21] for many decades. He says that the way to fight white populism is to increase the fight against income inequality “by retraining workers whose jobs have disappeared due to globalization and technology; improving access to higher education; and removing barriers of race, ethnicity and gender” – as if affirmative action has not been in effect for decades [22].

Sandel offers zero economic analysis preferring the fluffy language academics impose on their naive students with no intellectual obstruction. He is correct that of the Americans “born in the bottom fifth of the income scale, 43 per cent will remain there, and only 4 per cent will make it to the top fifth.” But once we break these numbers according to race, we get a very different picture, with poverty intensifying among blacks due to the fact that 72 percent of blacks are born out of wedlock [23], and blacks and mestizos can’t compete educationally [24] with whites and Asians. Sandel’s solution is the removal of “barriers of race,” for which he blames whites, while hiding from his students the statistical reality that “Asian Americans are the highest-income, best-educated and fastest-growing racial group [25] in the United States.”

Sandel is most ridiculous when he attacks the Democratic establishment for its “relentless emphasis on creating a meritocracy . . . The notion that the system rewards talent and hard work encourages the winners to consider their success their own doing.” Here we have a Harvard Professor, a member of the one-percent income elite in America, a man who has spent his entire adult life teaching rich kids PC politics, contriving a false appearance of populist goodness for white workers! Academics dislike white workers, whom they continually accuse of being bigoted and intolerant against their dearest students, that is, international students who are guaranteed citizenship, affirmative action, and worship by academics, whose official mission is promotion of diversity across all universities [26]. 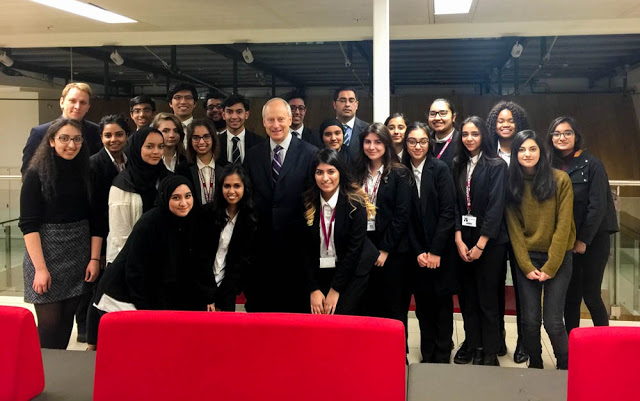 This charlatan even talks about the “populist” need to restore “the dignity of work” against an economic system that “accords less respect to the kind of work the working class does.” This is a key component of the renewed Leftist strategy: persuade white workers that ten-hour-a-week-academics really care for them, when all they care about is accumulating cultural capital while promoting a globalist immigration agenda.

Another component in Sandel’s conniving scheme is to include “patriotism and national community” in Leftist populism. “Free trade agreements and immigration are the most potent flashpoints of populist fury,” he observes. To fight the “ugly, intolerant expression . . . hatred of immigrants, a strident nationalism that vilifies Muslims,” Leftists must use a language that gives whites a sense of community “in a global age.” They should not automatically condemn patriotism, but softly employ a “public discourse” in which whites are made to view their national identities within the context of a politics that “aspires to a cosmopolitan ethic of universal human concern.”

He calls upon the Western world to “reimagine the terms of democratic discourse” by speaking of liberal values beyond the efficiency of markets, using “moral and spiritual convictions” – with the proviso, however, that such discourse avoids “the danger that the majority may impose its values on the minority.” Read: manipulate whites into never thinking in terms of their majority rights and interests, but only in terms of the interests of immigrant “minorities” and blacks.

“How is it possible to discuss the meaning of work and its role in a good life without debating competing conceptions of the good life?” he asks in grandiloquent Aristotelian terms. In truth, this is a typical academic misuse of Western moral concepts to manipulate well-meaning white students into believing that the Western intellectual tradition requires all white nations to be diversified. Never mind Aristotle’s view of the good life, which was ethnocentric to its core [28]; liberal values only require the recognition of the equal rights of historical minorities already inside a nation. The claim that liberalism requires racial diversification is a result of the infiltration of liberalism by conniving cultural Marxists [29].

When Sandel says to his students that he wants to “disentangle the intolerant aspects of [white] populist protest from legitimate grievances,” he is warning them that if they dare to believe in pro-European populism, he will identify them as “intolerant” promoters of a “vengeful nationalism,” a view that will not be tolerated in academia and will result in failure at a university in which the median grade is otherwise an easy A- [30]. This is what the new discourse of Leftist populism is about: violation of the civil rights of critics of diversity and manipulation of students’ minds. It is what makes it new from the populism of the pre-1980s, which was actually sincerely nationalist, rather than treacherous and intolerant of intellectual diversity.

This article was reproduced from the Council of European Canadians [31] Website.