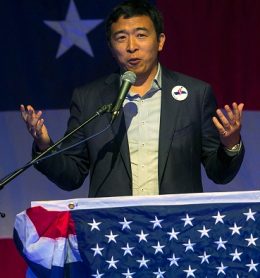 The memes are in, boys. It has been decided that we’ll enjoy our thousand monthly NEETbucks and government-mandated Chinese waifus while playing Fortnite; in the meantime the world’s unpleasant tasks will be handled by robots. Sound nice? That’s what our new utopia will look like under the wise guidance of Chairman Andrew Yang.

Heralded by that most jacked of manlets, Joe Rogan, Andrew Yang has burst onto the scene with his proposed universal basic income (UBI), awareness of the plight of white America, and ideas regarding post-industrial society. Also, from what I can tell, he’s gonna crack down on Silicon Valley bigwigs and make them kiss the ring and pay their dues, which is long overdue. Mercantile dorks like (((Zuckerberg))) and Bezos have been led to believe that they’re the biggest swinging dick on the planet in the face of state weakness in Western countries. Think of nerds acting like they own the football field while the jocks are hung over from last night’s kegger. Yang has promised, in so many words, to institute a program of sobriety among the jocks and suspend Cuckerberg and Betazos from the lampposts by their underwear.

Sounds nice? It’s a nice dream, I’ll grant you. For what it’s worth, I think Yang is pure of heart and intention. But UBI doesn’t work, and even if it did, it wouldn’t do diddly squat for the plight of white America, nor would it save America as a nation, as Yang believes. That’s because there is no saving America. Also, his dreams of robot workers are nothing new. Oscar Wilde had a similar idea [2] back when my grandfather’s grandfather was still a suckling babe. Wilde proposes an early version of the fully automated, gay luxury space Communism of memetic fame. Of course, if one reads the Wilde essay after having been awakened to the fundamental nature of men, one can see and feel the disgust of an aristocratic aesthete towards the crassness of bourgeois society, complete with nose held aloft and paternalistic urges to protect the people from the odious merchants and moneylenders. Wilde – tragically, perhaps – lacked the frame that would have given him the complete picture, which I suspect is the natural state for a man who paid ten times the amount of attention to his dress that he did to his work.

You’ll find lots of critiques of UBI and automated socialism in other places. That’s not the point of Yang’s campaign, really. The memes will play up this aspect, but I believe that at the heart of it, Yang-memers are actually repudiating Americanism. The usual suspects will probably kvetch about how UBI and automated socialism are bad and constitutes hamburger theft [3], how stuffing Bezos in his own locker is an assault on free markets, and how pantsing (((Zuckerberg))) in front of all the girls is not Who We Are – as well as anti-Semitic, of course. I can already picture the three-hour Molyneux harangue – complete with poorly-portrayed indignation – that wouldn’t pass muster in a tenth-grade production of Romeo and Juliet. What light from yonder grifter’s bald dome bounces? We know. We get it. We don’t care.

Essentially, memelord and Dissident Right support for Andrew Yang is about accelerationism, about helping this enterprising fellow put America and her global hegemony in the ground. Any Right-wing support for Yang will inevitably run into Alt Lite, conservative, and libertarian opposition. This is for the very simple reason that they serve a different god, which is to say they seek to protect a different thing, make a different friend-enemy distinction, and ultimately have allegiance to a different concept.

What really got me thinking in this way was considering the Proud Boys. They aren’t racist, as they repeatedly trumpet with annoying loudness, but rather are “Western chauvinists.” What they want to defend is Western civilization, to which, they claim, the white race is merely orthogonal. Sounds silly, right? It is very silly, especially in light of staggering amounts of research indicating that this thing we call Western civilization couldn’t have been developed without the unique cerebral architecture of the European brain [4], or the other unique aspects of European biology. But there’s a deeper problem with pledging allegiance to the West.

Reading Spengler will give you an interesting perspective on the cycles of civilization. Personally, I think there is no doubt that Western (Faustian) civilization is nearing its end, and that we are in the winter of the West, where all it can do is reminisce about its past glories and pretend that it’s still great, as we currently see Trump doing in trying to LARP as James Monroe in Venezuela. To be a Western chauvinist is to pledge allegiance to a dying civilization.

In a sense, there’s something noble in raging against the dying of the light. Like it or not, liberal democracy is the child of Faustian man. Spengler didn’t use the word Faustian for nothing. Faustian man: conqueror of infinite space, reaching ever further into the void, fighting the unbeatable foe, and dreaming the impossible dream, as the man sang [5]. And what, dear friends, is less possible than bringing the light of civilization to the turd-eating masses of the world? Let’s not kid ourselves; the insanity of globalist egalitarianism is very much Western in origin. The Proud Boys don’t get it. The Alt Lite doesn’t get it. They’re clinging to an outdated modality of Western being – literally Not Who We Are (anymore).

We can mourn Western civilization after it passes – and there’ll be much to mourn. But the death of the civilization will not mean the death of its people. The Romans and Greeks are still kicking around under various names, even though what Spengler called Classical civilization has been gone for a while now. Similarly, white people will survive the death of Western civilization – if Faustian man in his death-throes doesn’t destroy the white race first. Already the global hegemon and her various satrapies are cracking down on every form of white identitarian activism and actively discouraging white reproduction. And yet we still see misguided whites trying to save this fallen angel.

There is a great danger in trying to save a drowning man – the stronger he is, the more danger. In his panic, he might pull you down into the depths with him. Faustian man is already killing the white man. We can no longer risk trying to save him. We tried with Donald Trump, and failed.

And this is what I suspect the Yang gang wants to do. The hope is that Andrew Yang will put the West out of its misery through sheer stupidity before Faustian man snuffs us all out in nuclear paroxysms. Hopefully, Chairman Yang will throw some shekels our way and put the screws on the plutocrats before it all goes to shit. And then, as the Sky King [6] put it, it’s nose down and call it a night.