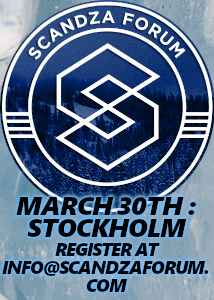 The next Scandza Forum is just around the corner. On March 30th, we will hold another conference in Stockholm. We have just added two more speakers to the event, and we now have a truly all-star lineup of advocates for Europe:

Martin Lichtmesz is a prolific writer, translator, and one of the intellectual leaders of the German New Right. Mr. Lichtmesz’s speech from the 2017 American Renaissance conference can be seen here [2], and his appearance on the 2018 Millenniyule is available here [3]. His latest book, Rassismus – Ein amerikanischer Alptraum, was recently reviewed on on this site, [4] and an overview of his impressive oeuvre can be found at the journal Sezession [5].

Millennial Woes is a Scottish vlogger, writer, and coordinator. He is part of the international “Dissident Right,” but particularly concerned with Great Britain. His work has covered psychology, morality, religion, culture, politics, and identity.

Jared Taylor is a veteran champion of our cause. Fluent in Japanese and French, and educated at Yale, Mr. Taylor has dedicated more than twenty-five years of his life to bringing reason, dignity, and eloquence to the issues surrounding race in society. You will find his work in his several books and on his Website, American Renaissance [6]. His latest book is If We Do Nothing (New Century Books, 2017). This will be Jared Taylor’s third appearance on the Scandza Forum stage.

Greg Johnson, PhD, former editor of The Occidental Quarterly, founder and editor of Counter-Currents/North American New Right, and author of numerous articles and books pertaining to the destiny of the West. His latest book is The White Nationalist Manifesto [7] (San Francisco: Counter-Currents, 2018). Dr. Johnson is one of the leading ideologists of White Nationalism and the Dissident Right, and an outstanding speaker.

Olena Semenyaka, head of the international bloc of the Ukrainian National Corps party and a researcher of the Conservative Revolution, with a focus on Ernst Jünger’s planetary analysis, pan-Europeanism, and philosophy of technology. Miss Semenyaka is an appreciated speaker of international standing and a first-class intellectual.

Mark Collett, a political activist and author from Great Britain. He has been actively involved in the nationalist movement for nearly two decades and was formerly the youth leader and Head of Publicity for the British National Party. He now hosts This Week on the Alt Right – a popular YouTube discussion show, and produces a weekly short on current affairs.  He is the author of The Fall of Western Man.

Fróði Midjord, founder of the Scandza Forum and host of the Guide to Kulchur podcast. 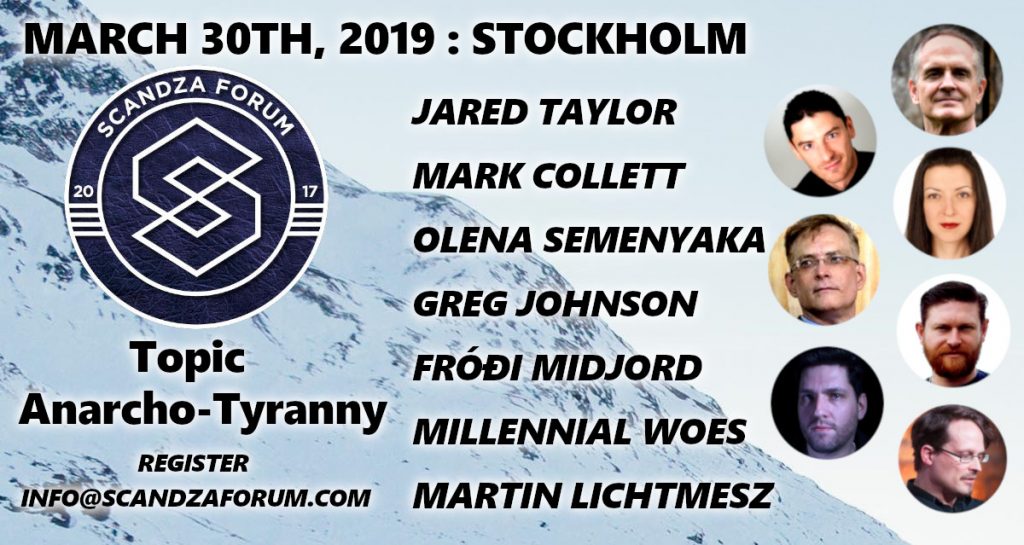 Our discussions will focus on Anarcho-Tyranny, which the late Sam Francis described as: “they refuse to control real criminals (that’s the anarchy) so they control the innocent (that’s the tyranny).” In the entire West, crime and immigration is out of control. In 2018, there were more than 300 criminal shoot-outs and 44 people were shot to death in Sweden. According to one study from Malmö University, there have been 116 hand-grenade attacks over the past eight years!

At the same time, even elderly ladies will be convicted of “incitement of hatred” if they use strong language as they post frustrated comments online. If you dare voice any protest against the downfall of our civilization, you will feel the merciless wrath of the globalist establishment. In essence, they shoot the messenger who points out the destructive consequences of the situation they have brought about.

We will discuss how we, as advocates for white interests, can navigate in a hostile environment where dissidents are silenced and deplatformed. Most importantly, however, you will get a chance to network with other individuals who share your concerns.

We meet as an act of defiance against the dispossession of our people.

If you want to know more about our events, please watch any of my several appearances on podcasts and live streams lately, where I have been interviewed about the Scandza Forum and Anarcho-Tyranny:

If you want to attend, please send us an email for information on how to proceed with the registration: [email protected]scandzaforum.com [16]

Because we care about your safety, we have a vetting procedure to make sure that everyone who attends does so with honest intentions. There are three ways you can get admission to the event, so remember to include the necessary information when you contact us:

In other words, this will be an unforgettable event – so make sure to register now! If you have already registered, you can expect an update later this week.

Finally, I want to thank our supporters and donors – you know who you are. It is with their help that the previous Scandza Forums have been made possible, and that we now are able to move forward!

I am looking forward to seeing you all in Stockholm on March 30th.