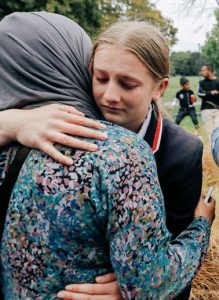 The correct response of all white people to isolated acts of terrorism by Right-wingers, according to our masters.

Politicians, journalists, and activists all agree that White Nationalism poses the greatest threat to Western democracy, and it must be stamped out by state and corporate power.

Massachusetts Senator Elizabeth Warren argued that “white supremacists” pose as much of a threat [2] to America as ISIS, and must be treated as terrorists. “We have to recognize the threat of white nationalism. We’ve got to call it out. As President of the United States, my Justice Department would go after white nationalists with full prosecution,” the 2020 presidential candidate declared [3].

The Council on Foreign Relations published a blog entry [4] calling for Five Eyes intelligence services to devote more resources to the “transnational threat” of White Nationalism. The CFR blog argued that White Nationalism may be more of a “dangerous threat” than Islamic extremism and Chinese expansionism, “simply because it has been largely ignored by policymakers.”

Stanford Law Professor Shirin Sinnar urged in a Slate column [5] for federal law enforcement to deploy its full might against the problem of White Nationalist terror. Sinnar suggested that the Racketeer Influenced and Corrupt Organizations Act (RICO) be used against suspected White Nationalist groups and that the military should drum out anyone associated with these entities. He also called for more tech censorship, and for President Trump’s “Islamophobia” to be rebuked.

Daily Beast world news editor Christopher Dickey wants a mass purge [6] of “white nationalist sympathizers” from the government, as well as criminal prosecutions of these wrongthinkers. Hate speech laws are not enough for the job, according to Dickey. He wrote:

Police and prosecutors loyal to democratic values have to pursue investigations into white nationalist groups with the same zeal that has been applied to radical Muslim terrorist organizations. Voters in Western nations have to understand that the fellow travelers of white nationalist terrorism are not acceptable participants in modern democracies, and vote them out, or see that they are prosecuted, or both.

The delusion that Donald Trump’s administration has embraced White Nationalism is shared New Republic editor Jeet Heer. “America is to white nationalism what Saudi Arabia is to jihadism,” Heer tweeted [7]. The insinuation is that the American government is exporting White Nationalism around the world, like Saudi Arabia promotes Salafism.

The Independent’s editorial board argued [8] that tech giants should excise hate from their platforms and develop advanced technology to detect thought crimes “before it turns to violence.” And BuzzFeed published a report [9] urging Big Tech to use the same techniques they have been using to censor ISIS against White Nationalism. The BuzzFeed report made it an imperative for this ideology to disappear from the Internet, because White Nationalism is inherently murderous.

“There is a clear line between political thought and the practice of a faith – even if you vehemently disagree with the politics or tenets of that faith – and an ideology that requires subjugating – or murdering – whole groups of people,” the report concluded

The House Judiciary Committee plans to hold hearings [10] on White Nationalism soon, the first step by American state power against this bogeyman. Australia and New Zealand both blocked 4chan and 8chan [11] after the shooting because the Websites hosted videos of the attack. It’s not too far of a jump for these nations to permanently ban the chans.

The hysteria around the attack is very different from what we have seen after Islamist attacks. The liberal elites typically assure their constituents that there is nothing to be afraid of, and that these terrorists are just a small minority. The terrorists, they repeatedly intone, do not represent their faith, nor do they represent a large movement. The sources of radicalization come from within the West itself, whether it is insufficient social benefits or foreign policy decisions. The elites never tolerate discussion of immigration or Islam’s incompatibility with the West.

After Christchurch, we’re told that we face a massive threat from an international army backed by multiple state actors. These groups are not a fringe minority; they’re connected to the halls of power and each other. And even though the Christchurch shooter was not connected to any group, journalists insist he was part of a highly-organized international terrorist network. White Nationalism is our greatest threat, and we must marshal state power against it.

The ones who make this argument reveal their real purpose in how they cast such a wide net in defining “White Nationalist terror.” Nearly every article on this global danger focuses on Viktor Orbán, Donald Trump, Vladimir Putin, and various other European nationalists. These figures and groups are not violent and are not terrorists. They’re simply people standing up for their nations against the globalists.

The whole point of the threat hysteria is to demonize normal, non-violent nationalists and silence their voices. The elites want police powers deployed against any group deemed hateful by the Southern Poverty Law Center, and attacks like the Christchurch shooting provide the justification for these measures.

It is beyond silly to imagine ethnonationalism as a state-sponsored nexus with tight organization consisting of groups that regularly espouse violence. Every major nationalist figure condemned the Christchurch shooter and emphasized that violence is not an answer. The majority of nationalist groups are committed to non-violence and engage in peaceful demonstrations. The few groups that do advocate violence, such as Atomwaffen, are in serious decline, and amount to little more than a bad joke when compared to the serious threat that is al-Qaeda or ISIS. There is no real organization behind the international Dissident Right outside of a few conferences and widely-used Internet platforms.

The state sponsorship angle is the most ridiculous claim of all. Trump is far from a White Nationalist, and his Department of Justice has brought the hammer down against many nationalist groups, such as the Rise Above Movement [12]. The President is more concerned with touting the unemployment rates for minorities than enforcing an America First immigration policy. He has also not hesitated to condemn racial nationalism whenever he is prompted to do so. There is no secret government fund for Right-wing nationalist groups.

Compare this to radical Islam. Al-Qaeda and ISIS have members in the thousands, and are spread throughout the world. They both have powerful and wealthy backers, and have received state sponsorship in the past. They carry out terrorist attacks frequently, and even have the ability to fight states on the battlefield. Needless to say, they encourage and praise acts of terror in their name.

State actors bear much of the blame for radical Islam’s popularity than America does for White Nationalism. Saudi Arabia sponsors Wahhabi mosques throughout the world [13], which instruct their followers that it is right to fight and die for Allah. Islamic extremism also garners sympathy [14] from a large percentage of the global Muslim population in general. Those tiny Right-wing groups which fantasize about violence bear none of these traits, outside of their own deluded minds. White Americans and Europeans in general certainly do not sympathize with white terrorism and are appalled by it.

Yet all whites are expected to acknowledge their guilt for these actions and atone for it by giving up their guns and voting for their own dispossession. Australian writer Rachel Withers articulated the elites’ desired response to the shooting in her article, “The Christchurch Shootings Should Implicate All White Australians [15].” “I’m a white Australian. I know that blaming myself and my cohort is illogical, but I can’t escape the feeling that all of white Australia is implicated in the deaths – a white majority that has fomented and let foment hate,” Withers lamented.

She considers racism to be “Australia’s most serious problem,” and feels tremendous guilt that she and her fellow woke white Aussies have done nothing to tackle this very serious issue. She also notes that Australia is a nation “born of shame.” “A white-majority Australia exists only as the result of a genocidal invasion – another irony missed by Tarrant (and Trump) in his rants about invasion,” Withers writes. This, according to Withers, is Australia’s original sin.

The Christchurch attack is a rallying cry for Aussies to act on their white guilt by condemning hate speech and fighting the “normalization of Islamophobia.” “Rather than go easy on ourselves, we must go hard,” Withers declares. She has enough self-awareness to realize that all of this “is a kind of self-centered masochism,” but she feels it’s better than the alternative of denying Aussie guilt.

Withers is not alone in blaming all Australians and New Zealanders for the shooting. Turkish President Recep Tayyip Erdoğan vowed to send any visiting Aussie or Kiwi with anti-Muslim sentiments back home in a casket, just “like their grandfathers” were at Gallipoli over a century ago. White liberals fail to understand that the rest of the world doesn’t relish in ethnomasochism, and is in fact empowered by white guilt.

While the Australian government is outraged [16] by Erdoğan’s statement, The Washington Post happily published an op-ed [17] by the Turkish leader. In it, he lectured the West on what it must do in the aftermath of Christchurch:

Western societies and governments must reject the normalization of racism, xenophobia and Islamophobia, which has been on the rise in recent years. It is crucial to establish that such twisted ideologies, such as anti-Semitism, amount to crimes against humanity. Moreover, we must shed light on all aspects of what happened and fully understand how the terrorist became radicalized and his links to terrorist groups to prevent future tragedies. Finally, all Western leaders must learn from the courage, leadership and sincerity of New Zealand’s prime minister, Jacinda Ardern, to embrace Muslims living in their respective countries.

In other words, the West must submit and eradicate its defenses against Islam.

Sadly, our governments appear all too willing to follow Erdogan’s commands. Europe already has a censorious regime in place that jails dissidents for incorrect speech. America has been free from this so far, but we can expect several Democratic presidential candidates to demand similar laws here. They already see white America as an enemy that must be brought to heel. They want white Americans to imitate Rachel Withers and acknowledge their guilt for acts for which they bear no responsibility. This is how they will get us to give up our birthright.

The American Dissident Right already has to deal with the tyranny of woke capitalism. State suppression is something we may soon have to grapple with and prepare for as well.