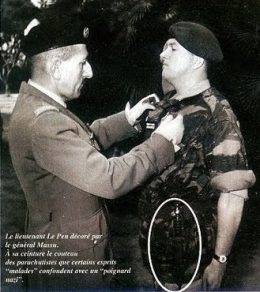 [The civil war between Gaullists and anti-Gaullists] calmed down somewhat in the 1950s, or shifted to other areas. It came into focus again with Algeria. There was an evident reversal after 1959: very Gaullist figures became very anti-Gaullist – and not bit players, either, but top brass like Soustelle.[1] [2] This necessarily led to a second purge, which broke the military in ’62[2] [3] as much as the purge of ’44-45 had, perhaps more. Sincere Gaullists were the most affected by this.

I will say it again: in Algeria as during the Second World War, the General’s failings [4] were less in his political choice than in his moral attitude.

The end of the Algerian war was botched, both economically and politically. Krim Belkacem[3] [5] has said how the French negotiators themselves – I believe it was Jean de Broglie[4] [6] – whispered to the Algerians at Lucerne,[5] [7] “You ought to ask for the Sahara.”[6] [8]

This move deprived France of her energy independence, despite having no basis in international law. I recall that at the time, the Sahara belonged to the OCRS, the Common Organization for the Saharan Regions, which included Mali, Chad, Morocco, Tunisia, Algeria, and Mauritania. We “gave” the FLN[7] [9] something which, in terms of research and investment, belonged to France, and which, in terms of territory, belonged to five or six nations.

But let us leave aside this detail. I think that De Gaulle considered decolonization a general prospect, including in North Africa and Algeria, and that he was decided on implementing it from the start, without weakness, as soon as possible. He was neither Islamophilic nor Arabophilic; he dreamed of being the leader of a third global power, of what we called the non-aligned. He dreamed of leading Europe and the newly-independent countries, illuminated by him, between the two blocs which he considered to be so many dead ends. We saw an example of this in his famous Phnom Penh speech.[8] [10] But he feared that he had little time left, so he eliminated and excluded everything that got in his way. He literally threw away Algeria. The pieds noirs,[9] [11] the army, and the Francophile Muslims whimpered, “But we will suffer!” De Gaulle’s answer was, “Well, you will suffer!”

They would indeed suffer, and De Gaulle didn’t give a damn. An officer of his generation had been trained to sacrifice the necessary proportion of those men under his command in battles as was deemed necessary. He did not have that paternal side which, at both the level of the regiment and the army, Pétain had had in 1917.[10] [12] It was not a matter of circumstances; it was a matter of personality. His haughtiness was not without a certain coldness.

What’s more, he did not like Algeria, nor the role that Algiers had played during the Second World War.[11] [13] He had only one thought: quickly. He did not want to seriously explore intermediary solutions which could have guaranteed the rights of the French populations, as in partition for instance. Nor did he want to negotiate Algeria’s future with organizations other than the FLN and the GPRA,[12] [14] as witnessed in the unfortunate Si Salah affair, the commander of Wilaya IV who had tried to negotiate a peace for the rebels of the interior in 1960.[13] [15]

Leaving Algeria was no doubt inevitable; one can even argue that demographics have proven General de Gaulle right in the long run. But there is also the method, and his was horrible. Brought to power by the pieds noirs to save them, he delivered them to their butchers. He abandoned the harkis and all the Muslims who had affection for us.[14] [16] In participating in this operation, the decapitated French army dishonored itself. It disarmed our supporters and delivered them to the fellaghas’[15] [17] revenge. Eighty thousand died because of this, but even if it were only fifty thousand, this would in no way change the horror or the dishonor. This disarmament would not prevent the Algerian civil war which began on July 2, 1962, and which has gone on ever since. Finally, several thousand Europeans were abandoned to the FLN, hundreds of women being kidnapped and taken to brothels while the French soldiers stood by and did nothing.

At Oran, one person saved his honor: a Muslim Captain entered the stadium where the pieds noirs had been put and set up his company’s machine-guns to force the ALN[16] [18] to free the hostages. This in no way absolves De Gaulle of responsibility, but it does show the responsibility of his contemporaries: many obeyed like the cattle he criticized them for being.[17] [19] Others went even further than him in their inhumanity, on the Right in order to escape a hornets’ nest which overwhelmed them, the Left by ideological blindness.

I have no hatred. I just find this tiresome. But De Gaulle remains for me a horrible source of suffering for France. No doubt he was a great communicator, a great actor. He no doubt had a certain classical conception of the State which he applied all the more when he was at its head. He also had the gift of effectiveness, which makes up for many crimes, failings, and vices. We can add that he often saw correctly in the long run, and he knew how to resist not only the vulgar appetites which his successors have often luxuriated in, but also the pressures of the powerful, and thus he served his country. This could be the portrait of a great statesman, where esteem would be joined with sympathy.

But alas, for France, he gravely sinned on two occasions, in circumstances in which he ought to have instituted a civil peace.

[1] [20] Jacques Soustelle was an ethnologist, politician, and, in later years, a member of the Académie française. After the Second World War, he became a senior figure in De Gaulle’s Rally of the French People party (RPF). Soustelle served as Governor General of Algeria between January 1955 and January 1956, and supported a continued French presence in the country, falling out with De Gaulle.

[2] [21] Following the “general’s putsch” of April 1961, in which four French generals tried to prevent De Gaulle’s moves towards Algerian independence through a military coup, unreliable officers were purged from the military.

[3] [22] Krim Belkacem was a leader of Algeria’s independence movement. He was murdered by the Algerian security services in October 1970 – strangled with his own tie in a Frankfurt hotel room.

[5] [24] French and Algerian officials engaged in pre-negotiations in Lucerne and Neuchâtel, eventually leading to the Évian Accords of March 1962, which stipulated a ceasefire between French and Algerian rebel forces and the organization of a referendum on Algerian independence, in effect meaning the end of French Algeria.

[6] [25] Algeria now possesses a vast stretch of the Sahara desert that is rich in raw materials.

[7] [26] The Algerian National Liberation Front (FLN) was the political and military organization which spearheaded the War of Algerian Independence, and has ruled the country almost continuously since independence, apart from a period between 1991 and 2002.

[9] [28] The pieds-noirs were the European settlers in Algeria, who numbered about one million, or ten percent of the total population. They came from diverse backgrounds, including Alsatian, Corsican, Spanish, and others.

[10] [29] During the French army mutinies of 1917, Pétain adopted conciliatory measures, such as a reduction in military offenses and an improvement in soldiers’ living conditions.

[11] [30] Vichy developed independent military forces in French Algeria as a way of gaining more independence from the Germans. French Algeria defected to the Allies in November 1942 under Admiral François Darlan, who claimed to be a continuation of the Vichyite French state, thus completely independent of De Gaulle’s Free French. De Gaulle had great difficulties in asserting his authority over the “liberated” French colonies and in getting Allied recognition as the head of the French government.

[12] [31] The Provisional Government of the Algerian Republic, the FLN’s political arm.

[13] [32] Si Salah was the rebel commander of one of Algeria’s provinces. He was killed by French forces in July 1961 under mysterious circumstances.

[14] [33] Harkis were Muslim soldiers serving as auxiliaries to the French. The term has since come to mean all collaborators with the French. The French army disarmed many harkis at the end of the war.

[17] [36] De Gaulle reportedly often said “les Français sont des veaux,” or “the French are cattle, for being so passive.”