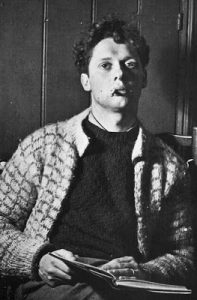 Not for the proud man apart
From the raging moon I write
On these spindrift pages
Nor for the towering dead
With their nightingales and psalms
But for the lovers, their arms
Round the griefs of the ages,
Who pay no praise or wages
Nor heed my craft or art.

— From Dylan Thomas, “In My Craft and Sullen Art”

He may have been a drunken misogynist, but he was our drunken misogynist! In A Child’s Christmas in Wales (1952), he conjured up all the wild magic of a long-lost youth, and in his seminal work Under Milk Wood (1954, he gave us a highly eccentric cast of characters in a hilarious play for voices about parochial people in a small, seaside parish clinging to the rugged coast of wind-blown Wales. He gave us lines such as, “It snowed last year too: I made a snowman and my brother knocked it down and I knocked my brother down and then we had tea” from A Child’s Christmas in Wales; “The only sea I saw Was the seesaw sea With you riding on it. Lie down, lie easy. Let me shipwreck in your thighs,” from Under Milk Wood, and “Though lovers be lost love shall not,” from “And Death Shall Have No Dominion.”

Given all this, it is particularly galling that Thomas is now associated with poetry and short story competitions mired in the ubiquitous themes of anti-colonialism, fighting racism and gender oppression, and calling for social inclusivity. A perusal of the list of recent long- and shortlists for the winner of the thirty-thousand-pound Dylan Thomas Prize reveals that almost none are of European extraction.

Professor John Spurr, Head of the College of Arts and Humanities at Swansea University, said of the Prizewinners [2]:

This year’s long list demonstrates the breadth, humanity and promise being produced by young international writers of such incredible talent. Featuring prose and poetry from new and established authors from around the world, it is a longlist to be relished. At this stage, the only certainty now is that the judging panel will end up with an exceptionally strong shortlist of six stunningly gifted authors.

These are writers and judges who have next to nothing in common with the troubled genius whose name they have hijacked to dignify their carnival-like celebration of multicultural, middle-class morality in a morbid attempt to give their so-called competition credibility. But is it really a merit-based accolade? Or is the outcome predestined in order to satisfy the insatiable appetite of the globalists and to conquer the European cultural credo? Their obvious objective is to fill the bookshelves of every suburban home across the length and breadth of the country with the pusillanimous poetry of Maya Angelou, the polemical prose of Bonnie Greer in such works as Obama Music, and the thinly-veiled liberation literature of writers like Zadie Smith, author of White Teeth, which focusses on the Bangladeshi community in London. And indeed, every time I enter a bookshop I have to contend with the simian smile of Michelle Obama relentlessly advertising her bestseller, Becoming, and rack after rack of books with titles like We Rise: Speeches by Inspirational Black Women, Natives: Race and Class in the Ruins of Empire by Akala, and Refugee Boy by Benjamin Zephaniah.

As for Dylan Thomas himself, he may have been a rogue, and he may have said, “Land of my fathers, my fathers can keep it,” but he had magic in his pen and starlight in his soul, and none of those who I have mentioned above – or those who dare claim to follow in his footsteps – can hold a candle to even one of his lesser, let alone greater, lines:

It is spring, moonless night in the small town, starless and bible-black, the cobbled streets silent and the hunched courters’-and-rabbits’ wood limping invisible down to the sloeblack, slow, black, crow black, fishing-boat-bobbing sea.

Those who do are nobodies and nothings who will hopefully soon fade into the ignominious obscurity they rightfully deserve in spite of the best efforts of the (((editorial and commissioning teams))) of the major publishing houses to promulgate their works. In truth, they are the blue-sprouting mushrooms covering the decomposing corpse of what the enemy claims is the passing of white male Western literature. It is up to us – every one of us, irrespective of age, gender, and educational attainment – to resist this gangrenous rot by means of boycotting this bilge on the bookshelves. We must exercise critical judgment about what we purchase, and for those of a more imaginative inclination, we must inject the penicillin of our own poetry, prose, and fiction, reflecting our own Weltanschauung, into the ailing body of our civilization. We must follow in the feted footsteps of giants like of H. P. Lovecraft, William Butler Yeats, Ezra Pound, and Louis-Ferdinand Céline.

We must establish our own competitions and awards better reflecting the vitality of the Western corpus, and helping us to escape the sterile, suburban stereotypes we are force-fed in our schools. We must defeat the constant overt and subliminal marketing being foisted upon us by a highly manipulative media establishment that obsessively seeks to endlessly deconstruct our children’s stories and classic literature in the hope that even our mythologies and foundational folk legends will be erased in to make way for Consumer Unit 1, the Multicultural Man. Despite my instinctive misgivings, a part of me swells with joy at the sight of Polish priests setting fire to copies of J. K. Rowling’s Harry Potter books, which are in reality nothing more than poorly-plagiarized fusions of C. S. Lewis’ Narnia adventures with Anthony Buckeridge’s Jennings and Darbishire schoolboy yarns. Rowling does not in fact represent a call for the return of witchcraft among schoolchildren, but something far more insidious: a pulchritude of plastic prose shorn of any authenticity, attempting to instill the desire for total racial inclusivity into the minds of her young and impressionable readership.

And so, as I perch on a hard, wooden stool in Brown’s restaurant bar under a cloud-strewn sky stretching over Laugharne, fingers carefully adjusting the chain on the 1930s pocket-watch in my waistcoat and staring defiantly into a glass of Penderyn’s honey-glazed malt, my mind drifts once more to that little boy growing up on Cwmdonkin Drive in Swansea, and I swear I can hear the First Voice in Under Milk Wood very gently breathe:

Only you can hear the houses sleeping on the streets in the slow deep salt and silent black, bandaged night. Only you can see, in the blinded bedrooms, the coats and petticoats over the chairs, the jugs and basins, the glasses of teeth, the Thou Shalt Not on the wall and the yellowing dicky-bird watching pictures of the dead. Only you can hear and see, behind the eyes of the sleepers, the movements and countries and mazes and colours and rainbows and tunes and wishes and flight and fall and despairs and big seas of their dreams.

I am certain that the Bardic traditions of Hedd Wyn, Edward Thomas, David Jones, and R. S. Thomas still runs rich in the veins of my kinfolk, and the transfusion of thinner alien blood and the attempted appropriation of our icons will soon pass like the grey rain falling over the Pendine Sands, and the ringing verses of Iolo Goch’s cywydds will blow once again through the trees surrounding Owain’s hall at Sycarth. We will hear sacred voices calling out through the deep green valleys and echoing boldly off the standing stone that marks the spot of Llywelyn ap Gruffudd, where last Prince of Wales made his final stand:

This land of my fathers is dear to me
Land of poets and singers, and people of stature
Her brave warriors, fine patriots
Shed their blood for freedom

Land! Land! I am true to my land!
As long as the sea serves as a wall
For this pure, dear land
May the language endure forever.

Old land of the mountains, paradise of the poets,
Every valley, every cliff a beauty guards;
Through love of my country, enchanting voices will be
Her streams and rivers to me.

Though the enemy have trampled my country underfoot,
The old language of the Welsh knows no retreat,
The spirit is not hindered by the treacherous hand
Nor silenced the sweet harp of my land.