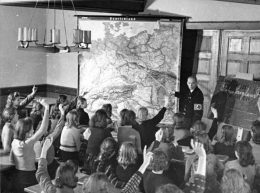 I would like to share the joy that is mine in finding myself in a world which is politicized, but which is neither sickening nor flat. I have always placed politics on the margins of spiritual life because, considered in itself, it is only a sum of infertile externals. It only busies itself with frameworks and forms, and it ignores vital comprehension and internal rhythm, qualitative complexity, and organic movements. What is quite pleasant in the political spirit of today’s Germany is that the Germans are integrating themselves into the general forms of the spirit through multiple connections and relations. This is because, in attempting to found a political phenomenon on an entire vital disposition – a collection of values independent of those of politics – they have overcome the latter’s platitudes conceived as a collection of autonomous values. This effort charms me. It consists in intentionally mixing religious, artistic, philosophical, and other values into the political sphere, thus politicizing the world without trivializing it.

When one thinks of the degree to which, in the majority of democratic countries, the sphere of political life is separated from that of other values, and of the size of the gap between politics relative to other forms which have isolated and reduced it to an irreversible nullity, one can only admire the German phenomenon, which has forcibly vitalized politics by appealing to others forms of the mind.

It is admirable to see how, in order to justify its existence, the regime changes the law, modifies religion, reorients art, builds another historical outlook, brutally eliminates three-quarters of the consecrated values, rejects with frenzy, and quivers with enthusiasm. If one objects that today’s political orientation is unacceptable, that it is founded on false values, that racism is a scientific illusion, and that German exclusivism is a collective megalomania, I would respond: What does it matter, so long as Germany feels well, fresh, and alive under such a regime?

Some say: But what about the citizen’s participation in the government, real freedom of thought, and individual expression? For my part, I respond to all democrats: in the current dictatorial regime, the citizen finds himself engaged with much more soul than he is in these insipid democracies, in which an illusory representation and a scandalous atomization have reduced political existence to an impoverished simulacrum.

Considered as an ideal orientation, in the purity of values and demands, democracy is indeed the most admirable regime. However, from the practical and historic point of view, it is henceforth external to man and inadequate. He who is unaware of this inevitability, according to which essentially inadequate forms of life become, with time, foreign to our psychological depths, this man will never resign himself to going from democracy to dictatorship.

One must ask all the democrats in the world: Why was it necessary to instate a dictatorship in Germany? In the same way one must ask all men: How can you conceive an amor fati[1] [2] for your individual existence and refuse to accept one in politics? Nothing is more painful than to see the degree to which men are insensitive to historical necessities, the degree to which their lack of barbarism estranges them from the irrational rhythm of life.

I was on the road to Prague when a social-democratic Czech – gentle as only democrats can still be (no doubt because of an awareness of the irreparable) – told me, with the strength of conviction, that Hitlerism would fall within two months, lamenting the lack of courage and brutality of the German Social Democrats who, if they had had these qualities, would surely still be in power. This man was unconsciously praising the Hitlerians.

I can also mention a Romanian friend here in Berlin, of an extraordinary temperament and with a passion as deep as it is overflowing, who delivered a panegyric to democracy and its current necessity to me for twelve hours, without succeeding in convincing me. I have met men whose sole desire is to return to the Enlightenment, who admire the eighteenth century and wish for the return of its spirit. Let me confess another joy: that of belonging to an epoch where the irrational has entered all fields; that of finding the supreme proof for a few metaphysical suppositions.

The time has come for irrationalism to be heard philosophically, but also politically. Whoever respects forms and awaits death with indifference cannot be an irrationalist in politics. Let us accept life as an inevitability; let us fight in and with this inevitability against all that is resistance to death, irreparable. If every irrationalism is paradoxical, it’s because it expresses the paradox of life. Let us be proud unto death of the contradiction of life.

Concerning the present historical moment, rather than the rationalism of the democratic politicians, I prefer barbaric, explosive, fecund, and dynamic irrationalism which, against dead forms, legalism, and judicial rigor, marks a triumph of vitality, energy, and desperate acts. Political irrationalism starts from the vital’s frustration in its struggle against outdated frameworks, hence its mix of barbarism, enthusiasm, despair, and exaltation. If one is not organically sensitive to this mix, to this admirable confusion, to this creative effervescence, one will not understand the German phenomenon.

Great political phenomena do not develop in a linear fashion, but according to a rebellious complexity. However, its direction depends solely on immanent destiny, an organic substructure only accessible to men gifted with a vital comprehension. No country in the world can embody a politics in the grand style without having had the courage to exist, a limitless courage, an infinite exaltation, and a grand madness. What’s more, I am overwhelmed with melancholy when I think that there is a country at the mouth of the Danube which does not have the courage to exist.