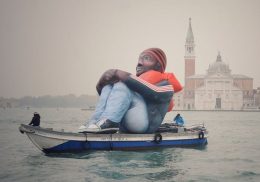 Venice Inflatable Refugee, an “art project” that was on display in Venice in 2016

I loved her from my boyhood – she to me
Was as a fairy city of the heart
Rising like water-columns from the sea.
— Lord Byron

The cupola of St. Mark’s basilica glows against the midnight-blue sky as I follow in Monet’s wake, sailing on a bobbing gondola that is being showered by flickering light, reflecting outward across the windless lagoon through medieval arched windows. Electric sparks sprinkle golden confetti over the maze of canals stretching from the island of San Giorgio to the dome of Santa Maria Salute. A warm breeze carries the madrigal-style echoes of cantus, firmus, and the canzone of Monteverdi’s Vespro della Vergine, rising like the castrato voices of angels, out through the Porta dei Fioro, with all its carvings of foliage and prophets, before moving along the Piazzetta dei Leoncini.

Just for a moment, I recall how Gabriele D’Annunzio wrote in his novel The Flame of Life (1900) of the “Il divino Caudio, what a heroic soul, purely Italian in its essence!” I thought of pro-Mussolini music, such as Francesco Malipiero’s film score for Steel (1933) and Mario Labroca’s Stabat Mater (1935) on the aste, or carved bow, of the bucking black gondola.

My mind was filled with images of winged lions; the Byzantine bejeweled icon of Madonna Nicopeia, the fourteenth-century altar screen in the Capella di San Pietro, the sixth-century reliefs on the Pilastri Acritani, and the dust rising behind the columns of the black-shirted squadristi as they followed the quadrumvirs – General Emilio De Bono, Italo Balbo, Michele Bianchi, and Cesare Maria de Vecchi – across the dusty Po Plain during the March on Rome. Before a crowd of sixty thousand in Naples, Il Duce declared, “Our program is simple: We want to rule Italy!”

And like other travelers before me, I could only marvel at the majestic masonry. I recalled Thomas Mann’s description of a gondola ride in his novella Death in Venice (1912):

He saw it once more, that landing place, that takes the breath away, that amazing group of incredible structures the Republic set up to meet the awe-struck eye of the approaching seafarer: the airy splendor of the palace and Bridge of Sighs, the columns of lion and saint on the shore, the glory of the projecting flank of the fairy temple, the vista of gateway and clock.

And then, of course, there was the melodic beauty of the “Rain in Venice [2]” pizzicato piece, from the classic 1981 British television adaption of Evelyn Waugh’s book Brideshead Revisited (1945).

Tipping my hat to the Pala d’Oro, the gilded copper horses, the magnificent Gobelin tapestries, and Paolo Veneziano’s seven hundred-year-old sculptures, I made my way down to the Strada Nuova, entering into the myth of La Serenissima for what the Venetians call a giro di ombre, or a bar crawl, in search of the famed cicheti amid the hustle and bustle of the bacari; places like Ramo Ca’d’Oro and nearby La Cantina. My fingers clutched a damp-stained 1933 Farrar and Rhinehart edition of Ezra Pound’s Cantos which includes testimonies by Ernest Hemingway, Ford Maddox Ford, and James Joyce. My mouth watered in anticipation of sampling delicacies like cuttlefish cooked in its own ink, and polpette – pork rissoles, to the uninitiated.

Surrounded by langoustines, calamari, liver, speck, and prawns – all served on slices of bread – my elbows hit the chipped marble bar counter, and I lifted a tiny glass of Veneto red to expectant lips. My eyes traced the wondrous words before my face:

Yea the lines hast thou laid unto me
in pleasant places,
And the beauty of this thy Venice
hast thou shown unto me
Until is its loveliness become unto me
a thing of tears.

O God, what great kindness
have we done in times past
and forgotten it,
That thou givest this wonder unto us,
O God of waters?

O God of the night,
What great sorrow
Cometh unto us,
That thou thus repayest us
Before the time of its coming?

Have seen this thing, out of their far courses
Have they seen this thing,
O God of waters,
Even as are thy stars
Silent unto us in their far-coursing,
Even so is mine heart
become silent within me.

And as I sit with the hubbub of football talk, and with praise for the sliced flank steak ringing in my ears, I reflect on D’Annunzio’s Arditi storm troops, his too short-lived Italian Regency of Carnaro in Fiume, and the fact he proposed that its Constitution should make music the fundamental principle of a corporatist state. I reflected on a quote from The Flame of Life: “That which at twilight had appeared to be a silvery sea-god’s palace, a structure of twisted sea-shapes, was now a temple built by the cunning genies of Fire,” and, “All those perishable things were rendered humble in comparison with the tremendous blazing Alps that tore at the sky with their thousand unyielding spikes, a vast, solitary city that was waiting, perhaps, for a new race of Titans.” Such words haunted me as I sauntered towards Ai Do Draghi, known as the red house – as much for its political leanings as for the color of its façade.

There, in a bar swarming with international students swilling spritz, I overheard hollow discussions of Gramsci, nostalgic praise for Renato Curcio and Alberto Franceschini’s Brigate Rosse, a call for the return to the Anni di piombo (the Years of Lead), and calls for Matteo Salvini and his Northern League’s death, as well as those of Gianluca Iannone and Casa Pound and Giorgia Meloni and her national-conservative Brothers of Italy.

Meloni’s speech about the Migration Compact in the Italian Chamber of Deputies seems to have triggered the Left:

The Migration Compact is exactly what is needed by those who have used illegal immigration in recent decades to complete the grand plan of financial speculators to deprive nations of their identity because without roots you’re a slave, and when you’re a slave you serve the interests of Soros.

These are prophetic words when you think of President Macron, the ceramic would-be De Gaulle, who claims that “geopolitical conflicts” will result in Africans flooding into Europe “for many years to come.” And there is the so-called French elite – who are not even remotely Gallic, nor given to serving the best interests of that proud nation – which use the French air force to attack Field Marshal Khalifa Haftar’s enemies – the leading figure in fractured Libya’s eastern quadrant – in order to gain control over the Al-Sharara oil field which is capable of producing 312,000 barrels of crude per day. Matteo Salvini, who now has access to information previously denied to people of his political inclinations, described this to the Aki news agency as potentially “devastating.”

And who actually thinks that clan-like nomadic and pastoral peoples can even comprehend, let alone add cultural and economic value to the sophisticated world they are being ferried to by NGO-sponsored boats? When they arrive in Europe, they end up entirely depndent upon refugee charities like the Baobab Experience in Rome, and Donne di Benin City in Palermo.

Does anyone seriously contend that these goat-herders from the Tibesti mountains are going to suddenly bring forth musicality to match Giovanni Pierluigi da Palestrina’s Renaissance polyphony, or Lodovico Viadana’s incorporation of basso continuo in early Baroque technique? Don’t hold your breath. Perhaps we can hope that they will include samples from the wonderfully vivacious Vivaldi, Giovanni Rovetta’s Psalms, and virtuoso Biagio Marini’s Arie, madrigal et corenti in their rap beats.

And is it possible that the lugubrious ladies of Libya or the audacious sons of Sudan will generate new concepts for the usage of our public realm that will somehow redefine how we interact with urban and rural space in the twenty-first century, like those envisaged by the Rational Architecture Movement? The Rationalists, who grew out of the Italian Futurist movement of 1909-1914, adopted the Stile Littorio (the Stile of the Lictor of ancient Roman Fasces) and embraced the sleek, minimal modernist style of buildings made of concrete, steel, and glass, but they also retained a reverence for ancient Classical lines using stylized columns, pediments, porticos, domes, and arches. Visionaries like Umberto Boccioni and Antonio Sant‘Elia have influenced filmmakers from Fritz Lang to Ridley Scott. And there were movement devotees like the Terragni bothers, who created a thirty-meter-tall memorial, Monumento ai Caduti, to those who had fallen on the Isonzo Front during the First World War, near the shores of Lake Como – not far from where George Clooney and his wife, both icons of liberalism, now reside. The epitaph which faces the lapping water reads, “Stanotte si dorme a Trieste o in Paradiso con gli eroi” (“Tonight you sleep in Trieste or in Paradise with the heroes”).

As I wandered back along the Fondamenta della Toleta near the Campo San Barnaba, I was filled with dread for the future of Venice – not because of rising sea levels and floods, nor even the pollution that chokes the lagoon with algae, but because of the shops that are transmogrifying the streets of the city into a bijou theme park, and the ever-multiplying holding centers brimming with thousands of bonobo-style migrants only fifty kilometers away. These developments threaten to turn this wonder of the Western world into a maze of canals littered with glass-bottomed boats manned by Senegalese gondoliers peddling ice cream and straw “Kiss Me Quick” hats.

And so I returned to my Cimmerian existence in a small, rented apartment that I was sharing with three young and enthusiastic adherents of Forza Nuova. I thanked God for Salvini’s commitment to putting the “good times” enjoyed by asylum-seekers to an end, and for Giorgia Meloni, that iron-willed patriot from Garbatella – a working-class area of Rome – for reversing former Prime Minister Matteo Renzi’s pro-immigrant stance. I thought of how the English novelist E. M. Forster once described Italy as “a country that’s upset people from the beginning of the world,” and how this former Empire could once again rise like a phoenix to ignite a Euroskeptical coalition opposing Brussels’ bulldozing of our borders, and bringing down this tyrannous kleptocracy. As Julius Evola said:

For the authentic revolutionary conservative, what really counts is to be faithful not to past forms or institutions, but rather to principles of which such forms and institutions have been particular expressions, adequate for a specific period of time in a specific geographical area.

And that, for me, is what this country represents: a timeless and enchanting reminder of how far we have come and what is still to be achieved as we modern-day Marco Polos reach out once again for the stars.