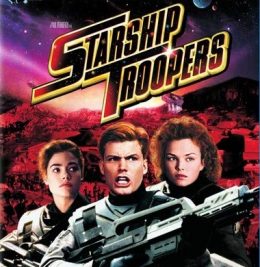 Robert A. Heinlein’s Starship Troopers (1959) marked his transition from writing juvenile pulp science fiction to serious novels of ideas, in this case setting forth a highly reactionary and militarist political philosophy. Paul Verhoeven’s 1997 film of Starship Troopers takes quite a few liberties with Heinlein’s plot but manages to capture its spirit and communicate its key ideas. Although Verhoeven’s film was enormously expensive and received mostly negative reviews, it was a box office success and since then has established itself as a classic military, science fiction, and coming-of-age film.

Of course Verhoeven could not film a straightforward adaptation of a novel that glorifies war and denigrates democracy in favor of something that sounds like fascism. So he claimed his movie was satire. But that’s not how the fans see it. Like Stanley Kubrick’s Full Metal Jacket, Starship Troopers contains over-the-top depictions of brutal military training and combat that actually function as recruiting propaganda. Moreover, many viewers find Verhoeven’s depiction of a fascistic military meritocracy highly appealing on both aesthetic and philosophical grounds.

Starship Troopers is the story of how Johnny Rico (played by Casper Van Dien) becomes a man and a citizen of the global state known as the Federation. Starship Troopers is set around 300 years in the future. Some time right about now, civilization broke down due to democracy and the social sciences (read: Leftism). However, as in the aftermath of the First World War, military veterans put an end to the chaos and established a new order, in which the vote is restricted to citizens.

Citizenship is awarded to those who volunteer to do federal service, placing their lives at risk for the body politic. Those who do not volunteer are called “civilians,” which implies that national service simply is military service. Civilians enjoy the protection of their basic human rights, but they do not have “civil rights” to participate in government.

Heinlein’s system is appealing, because it recognizes that there are two basic types of human beings: collectivists, who are willing to sacrifice their lives for the common good, and individualists who prize their own lives over the common good. One can also draw the same distinction in terms of the importance of honor. When forced to choose, the warrior prefers death to dishonor, honor being understood in terms of his role as protector. Those who prefer dishonor to death can be called bourgeois. In the novel, Heinlein also distinguishes between “men”—who choose lives of honor—and mere “producing-consuming economic animal[s],” who choose lives of ease.

Which is likely to be better governed: a society that reserves political power to an honorable minority proven to have the courage and responsibility to risk their lives for the common good—or a society that gives equal power to everyone, allowing the selfish, cowardly, and irresponsible majority to outvote their betters? The answer is obvious.

Heinlein’s proposal is appealing because it combines the best features of aristocracy and democracy. Aristocracies were, of course, based on risking one’s life for the common good. But heredity is a bad way to perpetuate such a system, because people don’t always breed true. Noble ancestors beget unworthy heirs, and every noble line has common ancestors when one goes back far enough. Democracy recognizes that leadership virtues can be found in all social classes, but it fails by politically empowering everyone indiscriminately, simply by virtue of being born.

Whether one is born a son of a prince or a son of the people, both aristocracy and democracy inevitably assign political power to inferior people through the principle of heredity. The best system, however, assigns political power only to the most responsible. The best way to recruit such people is to discard hereditary status and allow each individual, in each new generation, to determine his own status—by choosing to be a citizen or a civilian—and then giving those who choose citizenship the appropriate training.

The extreme brutality of the military training depicted in Starship Troopers seems excessive from the point of view of simple military necessity. But making citizenship dangerous discourages fundamentally bourgeois types from volunteering. When Johnny Rico (“rico” is Spanish for “rich”) tells his very rich, very bourgeois parents that he wants to volunteer for federal service, his mother’s immediate objection is that “People get killed in federal service.” (Of course, she later learns that people get killed by opting out as well, when she and her husband are obliterated by the hostile alien species known as arachnids or bugs.) Then Johnny’s parents try to wheedle him out of his choice by offering him an expensive vacation. (In truth, though, Johnny does not reject his parents’ offer out of a desire for a harder and more heroic life. He’s just infatuated with a girl. But this is a coming-of-age story, which means that at the start, Johnny has to be immature.)

Although the world of Starship Troopers is militaristic and meritocratic, it is quite pointedly not racist or sexist. All races are represented, and women can aspire to any position, including combat roles. Men and women even bunk and shower together in the military. This is absurd, of course, given the importance the regime places on both military efficiency and simple biology. There are, for instance, federal studies to find psychics, who might be the next step of human evolution. Also, one needs a license to have children, which implies some sort of eugenic measures. Such a society would not put women in combat, especially in a genocidal war of survival. Women can produce far fewer children than men, which makes women precious and men expendable in warfare. Therefore, they cannot have equal rights to choose combat. Moreover, such a society would not conclude that the races are basically the same, so that a stable and functional multiracial society is possible.

It seems odd that Verhoeven reduced the diversity of Heinlein’s cast. No filmmaker would ever do that today. I would like to think that he was simply guided by strong aesthetic considerations. I’d also like to think that he wanted heroes with whom his majority North-American white audience could better identify. But perhaps he simply thought a more Nordic cast made for a better “parody” of fascism. If so, we have to thank him for making the right choice for the wrong reasons.

The basic story of Starship Troopers is rather simple. High-school senior Johnny Rico is in love with Carmen Ibanez, who has much shallower feelings for him. Carmen is planning to sign up for federal service. Johnny decides to join as well, hoping to impress Carmen. His parents oppose his decision, Johnny rebels, and his father cuts him off. Johnny goes off to boot camp. Dizzy Flores, who is in unrequited love with Johnny, follows him. Johnny begins to excel at training. Carmen dumps him. When one of Johnny’s comrades dies due to his negligence, Johnny decides to quit and go home. But then Buenos Aires is destroyed by the arachnids, and Johnny rushes back to join the fight.

The war with the arachnids is utterly brutal. Due to his competence and the high casualty rates on his missions, Johnny is promoted from private to corporal to sergeant to lieutenant. He sees many friends and comrades die. He becomes detached from his pain over the breakup with Carmen. He comes to feel compassion for Dizzy.

At the beginning of the film, Mr. Rasczak chides Johnny for repeating the words of the textbook on citizenship without really knowing their meaning. When Dizzy dies, Johnny fully understands what it means to give one’s life for the common good.

But Johnny also repeats other lines from Rasczak, who is later his lieutenant: “I only have one rule. Everyone fights. No one quits. If you don’t do your job, I’ll shoot you.” You have a rank “Until you’re dead or I find someone better.” “Come on you apes! Do you want to live forever?”

Perhaps we are supposed to sneer at Johnny for being unoriginal, inauthentic, or high on the f-scale. But Johnny Rico has transcended all such concerns because he has transcended his ego by doing his duty. He has followed the path of the Karma Yogi. He has also become a bit like the arachnids: lacking ego, he is a perfect member of society. But they are born that way, whereas he had to attain detachment through suffering and effort.

Many critics have sneered at Verhoeven’s central cast—Van Dien, Roberts, Meyer, and Muldoon—because they are perfect looking but “wooden.” One of the extras on my disc is a screen test with Van Dien and Roberts in which they generate real heat. Verhoeven dampened that for the final film, again, perhaps to suggest that the characters are shallow fascist Barbie and Ken dolls. Or maybe Verhoeven wanted the characters to deepen emotionally as they experience suffering and compassion, which is exactly what happens with all of them as the story unfolds. In any case, Starship Troopers can be deeply moving, especially the deaths of Dizzy and Rasczak.

From a technical point of view, Starship Troopers is a brilliant achievement. I recently rewatched it on Blu-ray on a large-screen OLED TV, and I found the special effects to be stunningly realistic. The arachnids are genuinely terrifying. Basil Poledouris’ score is also highly effective.

Two scenes, though, are particularly powerful to me. When Johnny Rico has dropped out of federal service and is leaving base, we see hundreds of soldiers going about their business. Then, suddenly, some of them break ranks and start running. Others follow. And Johnny, not knowing what is happening, joins in. News of the destruction of Buenos Aires has hit. “War! We’re going to war!” one of his friends shouts. This scene wonderfully communicates the sense of being swept up in historical events that are larger than oneself.

At the end of the film, as Johnny emerges from the darkness of the bug city, he again sees large crowds of soldiers running. But this time, the meaning is reversed. Johnny has flushed the brain bug into the arms of his comrades, who have captured it, and this is not the beginning of the war, but the beginning of its end. Johnny Rico is no longer just a passive speck buffeted around by history. He has become an agent of history.

How was it even possible that such an appealing anti-liberal movie was ever made?

We are all supposed to have cold shudders when Johnny Rico screams, “Kill them! Kill them all!” as he and his fellow soldiers are swarmed by terrifying arachnid warriors—or when Zander Barcalow spits out the words, “One day, someone like me is going to kill you and your whole fucking race” to an arachnid brain bug—or when Carl Jenkins psychically probes the brain bug then exultantly proclaims, “Its afraid, its afraid!” After all, surely not all arachnids are like that. Surely things can’t be that black and white. But while shitlibs soil themselves, healthy people cheer such sentiments and work them into countless edgy Right-wing memes.

I have two hypotheses that might explain this film.

The first is that Paul Verhoeven did a good job because he fundamentally liked the story. Then, when the predictable oy veying about fascism started up, he claimed that he was parodying the whole thing. There are some definitely parodistic elements in the film clips of the republic’s propaganda. But the main story is quite “real” and played pretty much straight.

The second hypothesis is that Verhoeven delivered a good film essentially by accident. The smugness and psychological shallowness of Leftists often causes them to defeat themselves. They assume that simply restating Rightist ideas is enough to refute them, so they sometimes accurately communicate them to receptive audiences.

Whatever the explanation, Starship Troopers is an anti-liberal classic which has done far more to promote than to undermine Heinlein’s vision of military meritocracy.