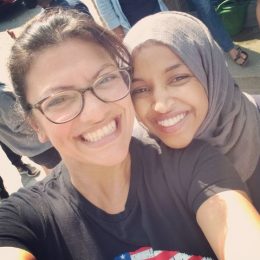 Reps. Rashida Tlaib (left) and Ilhan Omar, the leaders of the Democratic faction that is skeptical about America’s support for Israel.

Freshman Minnesota Rep. Ilhan Omar, a hijab-wearing Somali, ignited debate on Israel this year simply by noting the American Israel Public Affairs Committee’s (AIPAC) tremendous influence. In February, Omar tweeted that AIPAC controls politicians with its financial contributions. “It’s all about the Benjamins baby!” she said in a since-deleted tweet. Her tweets drew outrage from the political establishment, which howled that the Somali Congresswoman’s views were anti-Semitic. Omar quickly issued an apology after pressure from the Democratic leadership.

A few weeks after that controversy subsided, Omar accused American Zionists of dual loyalty. Omar said of her comments [2]:

I should not be expected to have allegiance/pledge support to a foreign country in order to serve my country in Congress or serve on committee. I am told everyday that I am anti-American if I am not pro-Israel. I find that to be problematic and I am not alone. I just happen to be willing to speak up on it and open myself to attacks.

This time, she refused to apologize in spite of intense backlash from her fellow Democrats. The powerful Democratic Rep. Nita Lowey tweeted at Omar:

Throughout history, Jews have been accused of dual loyalty, leading to discrimination and violence, which is why these accusations are so hurtful. I believe we can debate important policy without using offensive, painful stereotypes.

Democratic Chicago Mayor Rahm Emanuel also wrote an op-ed for The Atlantic [3] in which he said:

Representative Omar is repeating some of the ugliest stereotypes about Jews – tropes that have been unleashed by anti-Semites throughout history. She is casting Jewish Americans as the other, suggesting a dual loyalty that calls our devotion to America into question.

The House of Representatives drew up a condemnation of anti-Semitism in response to Omar’s statements, but altered it into a blanket rebuttal of “hate” following Democratic infighting. The condemnation denounced nearly all forms of religious and racial hatred – except hate directed at whites and Christians. Several Democrats, including media darling Alexandria Ocasio-Cortez, objected to the condemnation’s initial focus on Omar. “One of the things that is hurtful about the extent to which reprimand is sought of Ilhan is that no one seeks this level of reprimand when members make statements about Latinx + other communities,” Ocasio-Cortez tweeted [4].

Omar was defended by the Congressional Black Caucus and the Congressional Progressive Caucus. Also, other minority groups in Congress demanded that the resolution condemn criticism of their ethnic groups as well, which significantly broadened its scope. Jewish Democrats complained that it was necessary for the resolution to focus on Omar and anti-Semitism – to no avail.

There are people who tell me, “Well, my parents are Holocaust survivors.” “My parents did this.” It’s more personal with her. I’ve talked to her, and I can tell you she is living through a lot of pain.

The New York Times [5] and CNN [6] both said the controversy exposed a “generational divide” within the Democratic Party. The young progressive wing is leery of Israel, while the old establishment continues to wave the Israeli flag.

The divide was further showcased at last week’s AIPAC conference. House Majority Leader Steny Hoyer, a gentile, proudly proclaimed his dual loyalty. “So, ladies and gentlemen, when someone accuses American supporters of dual loyalty, I say: accuse me,” Hoyer said to roaring applause.

Most Democratic leaders made an appearance at the AIPAC conference, including Nancy Pelosi. However, several Democratic presidential candidates chose not to go [7], including Kamala Harris, Bernie Sanders, Beto O’Rourke, and Elizabeth Warren. All of these politicians are serious contenders to be the Party’s 2020 nominee – and they felt attendance was too big a risk. Sanders said he wouldn’t be at the AIPAC event because of “the platform AIPAC is providing for leaders who have expressed bigotry and oppose a two-state solution.” The rest of the pack didn’t explain their absence.

The powerful progressive group MoveOn urged candidates not to attend the conference. The group’s demand was based on AIPAC’s opposition to the Iran deal, its invitation to “Islamophobic” speakers, the injustices of Israeli Prime Minister Benjamin Netanyahu, and the group’s apparent refusal to condemn all the “White Nationalists” in President Trump’s circle.

Israel is arguably the most uncomfortable subject for Democrats these days. Many of their mega-donors, such as Haim Saban [8], are ardent Zionists. Saban claims he’s a “one issue guy, and my issue is Israel.” That single-minded focus, along with his generous contributions, convinced Hillary Clinton and many other powerful Democrats to be fervently pro-Israel.

This explains why Omar’s comments were met with a shrug. Five years ago, she would have been censured, stripped of her committee assignments, and dealt a strong primary challenger by the party leadership. Today, she’s let off with barely a slap on the wrist and imagined a heroic martyr.

Democrat leaders are befuddled on how to confront the rising anti-Zionism within their party. The two leaders of this trend, Omar and Michigan Rep. Rashida Tlaib, are non-white, Muslim, and women, making them impervious to white criticism. Both champion Boycott, Divestment and Sanctions [10] (BDS), while their party leaders want to outlaw the movement. Both represent the diverse coalition Democrats built to fight against white America. In spite of being Muslims, neither Omar nor Tlaib deviate from social progressivism. They both enthusiastically support LGBT causes, abortion, and women’s empowerment. One of Omar’s primary causes is fighting to allow trans women [11] to compete in women’s weightlifting.

Omar and Tlaib are likewise fervent advocates for non-white racial grievances, and show no respect for the historic American nation or its founding peoples. Omar believes [12] “white supremacy” is the greatest threat to America and wants the government to shut down White Nationalist websites. Both she and Tlaib want to abolish Immigration and Customs Enforcement [13] and champion open borders. Indeed, the one notable difference between them and the party leadership is their attitude toward Israel.

Many on the Dissident Right cheered on Omar’s defiance of AIPAC and the rabid Zionism of the political establishment. It was refreshing to see a politician make basic critical points about Israel and not back down. The ensuing political firestorm demonstrated to the world how intensely loyal the establishment is to Israel. You can’t even point out AIPAC’s influence without being called an anti-Semite. It’s truly dystopian that a basic fact, which any reasonably intelligent person can deduce, cannot be said publicly.

The fight over Omar’s comments weakened this stranglehold and allowed for a conversation to take place – on the Left, at least. The American Right is a different story.

At the same time that Democrats have been fighting over Israel, Republicans have been doubling down on their support for it. President Trump routinely touts all of the things he’s done for Israel. Trump moved the American embassy to Jerusalem. He withdrew from the Iran deal and rattles the saber at Israel’s main geopolitical foe. He safeguarded foreign aid for Israel in the latest budget bill. And he recently recognized the occupied Golan Heights as Israeli territory.

Trump has done more for Israel than he has for Middle America – and he’s proud of it. His party has hailed these decisions as terrific achievements and vowed to stand even more firmly by Tel Aviv. Republicans have led the censorship effort against BDS, and defended insidious laws that require state employees to swear allegiance to Israel [14]. When it comes to Ilhan Omar, Trump and his party see her as the ultimate anti-Semite. They gleefully claimed that Omar and her “anti-Semitism” are a serious danger to America. They drew up their own condemnation [15] that would specifically condemn her and anti-Semitism. Her opinions became the top conservative media story for weeks, all to paint Democrats as the real anti-Semites.

There are no prominent critics of Israel on the American Right, excluding Pat Buchanan. All Republicans enthusiastically support it and will never question AIPAC.  This shows no signs of changing. The Trumpist insurgency challenged conservative orthodoxy on immigration, trade, and foreign policy, but reaffirmed – and in some ways strengthened – the party line on Israel. Indeed, Omar has only made Conservative Inc. and MAGA world more pro-Israel.

There are reasons not to get excited about the Left’s shifting attitudes on Israel. It’s not motivated by the desire to put America first and resist the demands of a foreign power. Rather, Leftists see Israel as an oppressive, racist white power that must be brought down. Anti-Zionism is part of their larger anti-white agenda. It doesn’t matter if Israeli Jews don’t see themselves as white and in fact agree with the Left’s push to transform the West. They oppress people of color and should elicit no support. And the shift on Israel doesn’t necessarily come with greater sense on foreign policy more generally. Omar herself supports intervention in Syria [16] against Bashar al-Assad, an objective Likudniks also back.

The future leaders of the great rainbow coalition may say some reasonable things about Israel, but that’s the only good thing about them. They will never be our allies and are firmly committed to our people’s dispossession. It is right to admire Omar’s willingness to point out the obvious, but at the end of the day, she symbolizes the anti-white clown world we’ll have as a racial minority. Anti-Zionism is not a worthwhile consolation; our cause is far more important than Palestinian statehood.

The Left’s growing opposition to Israel has possibly convinced Netanyahu to side more closely with Western nationalists. He enjoys good relations with Viktor Orbán [17], Matteo Salvini [18], and Jair Bolsonaro [19]. He has encouraged Trump to build a wall [20]. The old Likud mindset of “nationalism for me, but not for thee” is changing. Past Israeli leaders would have brandished the memory of the Holocaust to attack leaders like Orbán. Instead, Netanyahu invites him to Israel and praises his policies. Maybe he knows the only people who will support Israel are whites, and it’s not a good idea to replace them with Third-Worlders who want to drive the Jews into the sea.

The Dissident Right must carefully navigate this new political situation. We must assert that our foreign policy should be America and Europe first – not Israel first. But at the same time, we should disabuse ourselves of the notion that we have common cause with anti-Zionist Leftists. We don’t. Anyone who advances our dispossession is our enemy. Period.