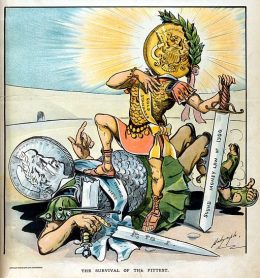 There are a lot of labels that those on the Dissident Right are throwing around, both as an alternative to the term Alt Right and in an attempt to delineate their own ideological positions. Together, they comprise a hodgepodge of political traditions and ideologies, including traditionalist, Neoreactionary (NRx), reactionary, propertarian, New Right, Dissident Right, White Nationalist, paleoconservative, civic nationalist, American nationalist, or sometimes simply nationalist. I personally mostly use reactionary, traditionalist, and nationalist, but I have the advantage of being able to simply appeal to Dutch nationalism if necessary, with no further explanations needed, as most Dutchmen know what I mean by that and to what traditions, values, and history I appeal.

The group that has most consistently set itself apart is, of course, the National Socialists. Fascist is vaguer, because then you have classical Fascists, clerical fascists, Romanian fascists, and so on. However, most people in these circles do not identify as either National Socialist or fascist, even though they may take some ideas from them.

Neoreaction (NRx) used to be a much bigger group in these circles, but a lot of its base shifted to the Alt Right over time and is now looking for different labels, like the rest of us. Curt Doolittle settled on propertarianism, and Moldbug dropped out entirely. NRx did succeed in the sense that their ideas have been one of the major influences on current non-mainstream Rightist thinking. This includes the concepts of The Cathedral, the inner and outer party (the “uniparty”), the value of manorialism, IQ shredders, and many others we often use today as an integral part of our discourse.

Men Going Their Own Way (MGTOW) is another influence on Rightists, specifically sex realism and all of its attendant aspects (hypergamy, the disposability of men vs. women, the 80-20 attraction pattern, and so on). MGTOW is also one of the fastest-growing anti-mainstream forms of thinking, rapidly catching up with Rightist Websites and YouTube channels in terms of traffic.

Thus, there is a general chaos of ideas. No one seems to be grounded in a specific philosophical tradition. Burkean conservatism? Not even mainstream conservatives call themselves that anymore. Nineteenth-century reactionary in the tradition of De Maistre? No one has even heard of De Maistre other than historians, much less appeals to him. Traditionalist in the sense of Julius Evola and René Guénon? While some of their ideas have been incorporated into our thinking, the term “traditionalist” as used by most people seems to be more in reference to traditional family values. The New Right? Again, some ideas were incorporated, but only some Frenchmen seem to identify with the label. Eurasianism? It has little influence outside Russia. Indeed, it seems that one of the only common influences among all these groups is Friedrich Nietzsche.

My conclusion is that we have a sort of rational, synthesized, and streamlined Right-wing ideology that is amorphous and nameless, but which is generally shared by all outside the mainstream Right who do not identify as National Socialist or Fascist, and which incorporates a wide array of differing ideologies, worldviews, and ideas. The labels we apply to ourselves are just a way to attempt to find a name for this ideological synthesis, a new ideology if you will; something which used to be covered by the term “Alt Right,” but which has fallen out of favor because of the numerous strategic mistakes associated with it. Still, the term effectively describes the nameless ideology of current dissidents: an amalgam of alternative thinking to the mainstream from a Right-wing perspective.

Nostalgia holds us in its grasp. We only look backwards, despite much rhetoric about the need for a new ideology for the future. I have a friend who is an engineer and who is also on the far Right, and he has absolutely no sentimental or nostalgic feelings about politics. His view is simply a clinically rational analysis, pure Darwinian logic applied on the societal level. The Church of Creativity probably came closest to describing this worldview in The White Man’s Bible. Its essence is that our race is our religion, and that all methods and values that most effectively ensure its survival and dominance are justified. This is the logic of nature, after all: kill or be killed, the right of the strongest, and so on. Therefore, religion, social values, law, and morality are all tools that need to be shaped with racial survival in mind. In this view, art serves merely to keep morale up and glorify our achievements, and religion is a tool that should be used to regulate society in a Durkheimian way. Libertarian economics should be applied internally to weed out the unsuccessful and internally improve the race, while socialism should be used when in conflict to ensure group survival. Technological progress is an arms race to ensure survival and dominance; recall how Europeans came to rule the Earth through gunpowder and steam engines. If other groups can gain such a comparative technological advantage, they will not hesitate to use it.

I find this unromantic and coldly rational vision of the engineer quite disturbing (coincidentally, the author of The White Man’s Bible, Ben Klassen, was also an engineer). It is technocratic racialism. But it is also fairly irrefutable. The logic of applying our scientific understanding of nature to society does indeed work. If we examine all of history up until the Second World War, we see that all human societies followed such animalistic logic. Groups aim to spread their genes as far and as widely as they can, and they need as many resources as they can get to accomplish this. So history is a process of consolidation and expansion, where unsuccessful races are wiped out or assimilated. There are, of course, occasional setbacks, like the fall of Rome, the Black Plague, or the many calamities in China which occurred whenever another dynasty fell. In this sense, Spengler’s view of cyclical history holds true. But there is also a linear history that has no grand narrative; there has been fairly constant population and productivity growth around the world – again, with some setbacks. But it is a linear upwards curve which has become exponential over the past century. There were considerably more people, in more urban environments which were more productive, in 700 AD than in 700 BC. This was again the case in 1700 AD. And this holds true universally, even in Africa, although growth there has been markedly lower.

This meant that nations grew ever more powerful and more capable of warfare. So what we saw in Europe was a consolidation of small feudal systems into nation-states whose borders were mostly defined by the furthest extent to which members of that ethnic group had spread. Thus, Germany was formed by a number of feudal states which already considered themselves ethnically German. After the formation of these nations, wars erupted across borders, mostly with the protection of their own ethnic group as a justification. This process was interrupted by colonialism. Territories with resources that were easier to gain were discovered. Fighting peoples with less advanced weaponry had a much better risk-reward ratio than fighting other Europeans, and thus the scramble for America, Africa, and Oceania began, and continued until the World Wars. European genetics spread across the globe.

The World Wars were the logical capstone to this process. All the easy land had already been taken and settled by European competitors by 1914. Nature does not pause, so the next logical step for these empires was to engage each other so that one would ultimately be victorious, acquire all the resources, and spread its genes further. (For a non-European version of this process, see the Bantu expansion into Africa.) And one power did indeed end up as the world hegemon: the United States. The US, however, has a mind-parasite that prevents it from following natural principles, and it has no ethnic group of its own to propagate, so it propagates “ideas.” Nevertheless, it does follow the logic of empires: conquest, dominance, and turning others into satrapies.

Life is a continuous process of genetic propagation. All life is in competition. The food pyramid is a result of this. New species evolve new strategies to outcompete others. Humans have been the most successful at this. And among humans there is competition also, to continuously outcompete each other on both the racial and individual levels. (For an explanation of this, see The Alternative Hypothesis video [2] and article about the “European Revolution [3]“.) This is the logic of life.

It is often said in these circles that growth for the sake of growth is the ideology of cancer cells. Still, cancer is life – even though it kills its host. It is part of nature. It follows the logic of nature. On a long enough timeline, only one race of people will survive on the Earth, although it might take millennia. The most successful and ruthless will win. Currently, I would put my money on China. And that group will conquer the stars, because we must conquer the stars, if we do not want to die along with this planet.

Another possibility is that there will be a repeat of colonialism. Some number of nations and races on Earth will remain, but they will expand into the stars separately, creating their own colonial empires. But even then, this situation will end with its own type of “World War” – and a hegemon will arise.

This worldview leaves very little room for a romantic view of mankind. And that is where I object to it. I find the logic of this technocratic engineer hard to refute, but it is no grand narrative to inspire people. It is very inhumane. But cladding this skeleton of cold, hard, Darwinian logic with romantic flesh, and developing associated morals, values, and forms is what we as the Right should be doing, rather than clinging to old ideas. I think NRx undertook great steps towards this. Science is just a means to measure reality. You ignore what it shows at your own peril. Nevertheless, humans are irrational creatures, and therefore a complete political system requires illogical parts. Art is an irrational activity. For example, modern architecture has made that particular branch of art rational and efficient. Still, most people despise modern architecture and long for the beauty of the past – even if it is costlier. This is what we might call the romantic part – the Soul of Man.

We already have the rational part of a new ideology: Darwinian science. Let’s build the irrational part; namely, the contribution the humanities can make. What forms, morals, and systems do we need? I personally think religion has a big role to play in this. One needs to merely read Durkheim to understand its importance. We need to build a new and coherent philosophy out of this nebulous soup of ideas that floats around in dissident circles.

This realization that genes want to spread, and that all culture and civilization is merely a carrier for the successful propagation of a group’s genetics, is something all Rightists should keep in mind. However, if someone can refute this logic, then I would be happy to hear it. It is not a pleasant thought.

(One can also see this podcast [4] for more discussion of these ideas.)