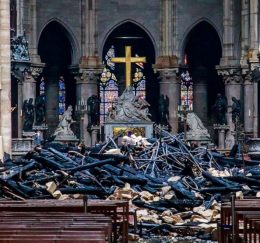 Notre Dame de Paris burned this week in a fitting metaphor for our civilization. We all watched as the spire crumbled in real time and the fire ripped through the interior, feeling helpless before the inevitable march of history.

Whether it was by arson or neglect, much of Notre Dame is gone forever. Emmanuel Macron’s government plans to rebuild the great wonder in just five years, and is hosting an “international competition” for redesign plans. “Should we rebuild the spire envisaged and built by Viollet-le-Duc under the same conditions . . . (or) give Notre Dame a new spire adapted to the technologies and the challenges of our times?” asked French Prime Minister Edouard Philippe [2].

The announcement caused grief for many people who wish to see Notre Dame restored to its original glory – sans modern additions. Ultimately, it’s the French government’s call on the redesign, as they own Notre Dame.

The destructive fire brought up the question of what Notre Dame represents. Nearly everyone on social media had an opinion on the matter. Ben Shapiro claimed it as a monument to Judeo-Christianity [3] – a historical anachronism anathema to the medieval Church. Shapiro later claimed we needed to return to the “philosophy” and “values” that built it, which implied the conservative commentator thought the Enlightenment crafted the Cathedral. This view sees Notre Dame as a representation of “Western values” – specifically, the claptrap that Cold War America claimed to stand for: liberty, free market capitalism, and an ecumenical Judeo-Christianity.

Others admire it as a wonderful piece of art, a beautiful thing they saw on their college trip to Paris. There is no better way to signal that you belong to America’s upper-middle class than to share your story of visiting Notre Dame. It’s just so beautiful and sad that no other tourists can get a selfie there anymore! Such people see Notre Dame as nothing more than a nice spot for tourists. This is the most common view, and is what makes the Cathedral so profitable.

Aggrieved minorities see the Notre Dame fire as cosmic retribution for the injustices of white Christians. According to them, the great Cathedral was built on the ill-begotten fruits of colonialism and showcased art stolen from Third World cultures. It was a monument to bigotry built at a time when the Jews were being expelled from France and Talmuds were burned. It wasn’t inclusive, and represented the bad, old Europe. Good riddance. Such people view Notre Dame as representative of Western civilization – and that’s bad.

Catholic conservatives insist that the Cathedral was theirs and theirs alone. Notre Dame is a place of worship and built by men of God, they say. The only way to truly rebuild it is for France to repent and return to its ancestral faith. To imagine the Cathedral as anything but a monument to God and Our Lady is to debase it. Some Catholics have even suggested that the French [4] should leave Notre Dame a burned-out husk, since the secular redesign is likely to defile the sacred place. A ruined Notre Dame would be a fitting tribute to France’s lost faith and the triumph of liberalism.

The proponents of all of these views will fight over Notre Dame’s reconstruction. The most likely scenario is that the new redesign will largely recreate the old elements, while adding some modernist garbage. The French state will insist that the additions are necessary to reflect the diversity and values of the modern world.

Some scholars and journalists agree. “The building was so overburdened with meaning that its burning feels like an act of liberation,” Harvard architecture historian Patricio del Real told Rolling Stone [5]. The magazine also said that “some people in France” resented Notre Dame as “a monument to a deeply flawed institution and an idealized Christian European France that arguably never existed in the first place.” And Oxford graduate student Daniel Judt wrote in The Nation [6] that the fire presented an “opportunity” to remake Notre Dame into a symbol of a more inclusive France.

It’s probable that these views will influence Notre Dame’s redesign. The new structure will announce that this Cathedral belongs to modern France. One can only hope they don’t recruit the disgusting, anti-white artist [7] who designed the mural beneath the Eiffel Tower for this project. Catholics and others who want the old Notre Dame back will be disappointed by whatever redesign French officials agree upon.

The Catholic view of Notre Dame may be the most historically sound one, but their wishes are the most unrealistic. France is barely Catholic anymore, and shows no sign of reconversion. Only five percent of French Catholics [8] attend mass weekly, and just fifty-three percent of France identifies as Catholic. Priest ordinations continue to drop [9], with fifty-eight French dioceses in 2018 reporting no new priests. Hundreds of churches have been vandalized in the past few years, with only a collective shrug from the French people. The fire may have saddened French Catholics, but it’s unlikely to make them go to church again. Most people who go to Notre Dame are tourists with little connection to the old faith. It had already been effectively reduced to an interactive museum, redesign or no.

It’s right to lament what we have lost and hope we can regain it. But the spirit of medieval Catholicism is far removed from our own time. Medieval people saw most illnesses and catastrophes as caused by demons. Witches were real in their world, and so was magic. The world was flat and the Earth was the center of the universe. Anti-Semitism was part of the faith; no one talked of “Judeo-Christianity.” The Church had no issue with waging war on Christendom’s enemies. It built immortal structures. The Pope had actual temporal power, and monarchs had to bend the knee to his authority.

Nowadays, most conservative Catholics accept scientific explanations for illnesses and disasters. The world is desacralized. The Catholic Church has apologized for anti-Semitism, and most Catholics pretend that “Judeo-Christianity” built Western civilization. The Church has apologized for the Crusades, and seeks “dialogue” with Muslims. The Church builds abominations [10] all on its own, and the current Pope kisses the feet of Third World warlords and panders to the progressive elites.

Catholicism is not the militant faith it once was. Only LARPers see the burning of Notre Dame as the matchstick that will bring back the old Church. It was undoubtedly a tragedy, and forever ruined one of our civilization’s great works. An identitarian perspective sees Notre Dame as connected not merely to a religion or values, but to our people.

“I chose a highly symbolic place, the Cathedral of Notre Dame de Paris, which I respect and admire: she was built by the genius of my ancestors on the site of cults still more ancient, recalling our immemorial origins,” wrote Dominique Venner in his suicide note [11]. Venner famously killed himself in Notre Dame Cathedral in 2013. The French patriot, although a non-believer, saw it as an expression of the European soul and a fitting place to defy its decline. “Lacking an identitarian religion to moor us, we share a common memory going back to Homer, a repository of all the values ​​on which our future rebirth will be founded once we break with the metaphysics of the unlimited, the baleful source of all modern excesses,” he wrote.

Oswald Spengler saw Gothic cathedrals like Notre Dame as an expression of the Faustian soul. They captured the world spirit of the North’s high forests, of “treetops struggling to escape the earth.” Regardless of the faith practiced within its walls, Notre Dame embodied Western man’s essence. This was a monument that could never have been produced by Ethiopian Christians. It could only have been made by us.

This is a factor that is never taken into account by others. Yes, the Cathedral was built by men of God – but they were white men. It could only be made by spiritually healthy Europeans. Deracinated architects of the current year could never recreate it. The values that were expressed by Notre Dame were not those of the Enlightenment, or anything else that is today upheld as “Western values” by “respectable” conservatives. In its essence, it was rather deeply reactionary.

Those non-whites who celebrated Notre Dame’s burning understood something about it that most conservatives didn’t get. It represented white people and their civilization. That’s why they cheered its destruction.

Whenever Western civilization is brought up by its defenders, it means one of three things: it conjures up its “values,” its religions, or its people. The first is the most acceptable and popular meaning. The second is slightly less common, but still socially acceptable. The third, however, is forbidden and despised by those who uphold its other two meanings. But it is this view which is the truest, and it is the view of identitarians. While our values and faiths may change or weaken, the European peoples still remain. We can revive the spirit that created Notre Dame and other great works as long as we still exist.

We see Notre Dame as a tragedy because we know that the people in power can’t be trusted to restore it. If identitarians had power, it would only be a minor setback. No one would doubt that Notre Dame could be restored to its former glory.