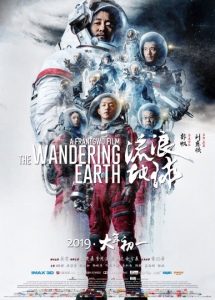 “Routes are countless. Safety is foremost. Unregulated driving, loved ones end up in tears.”

The premise of The Wandering Earth, directed by Frank Gwo and based on the novel of the same name by Liu Cixin, is that the Earth must move to a new solar system after the Sun becomes overactive. Giant thrusters push the Earth away from the Sun, forcing the human species underground.

Rather than a review of the movie, which can be summed up as a mildly entertaining science fiction movie full of 2012-like near-death experiences, the movie’s treatment of race, language, and nationality are more interesting. Man’s relationship to technology is naturally a crucial element, and the best part of the film is the design and portrayal of the thrusters and the concepts that would make “The Wandering Earth Project” work.

The movie basically follows two points of view: that of the young Liu Qi and his adopted half-sister Han Duoduo, and Liu Qi’s father, Liu Peiqiang (played by Wu Jing of the Wolf Warrior films). Qi and Duoduo begin the story underneath Beijing in the twenty-fourth century. Duoduo sits in what appears to be an ordinary classroom, wearing an ordinary school uniform, but we soon see that the light coming from the windows is simulated. Liu lives in a cluttered room and works as a mechanic. Everyone in science fiction underground Beijing is Han Chinese, just like in real life. There are Chinese decorations, and the day-to-day lives of the people there appear more or less as normal and petty as those in the twenty-first century. They make their way above ground and steal a truck, before joining “C171-11” on its mission to replace the reactor cores of one of the thrusters after nearly half of them fail.

Meanwhile, Liu Peiqiang is up in the space station which orbits the Earth. The few shots that show larger groups of cosmonauts in the station reveal that most of them are Chinese, with a few white ones among the crowd. Since they all wear the flags of their respective country on their arm, one sees a few Europeans, and the rest are mostly Chinese. Peiqiang’s co-worker and friend is a bald, bulky Russian called Makarov. Because everyone working in space or on the Earth’s freezing surface is equipped with a uniform that has a computer attached to its arm, Peiqiang and Makarov each speak to the other in his native tongue, and understand each other perfectly. 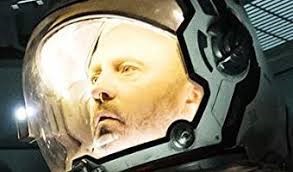 [2]
At some point in the middle of the story, it occurred to me that since the thrusters were pushing the Earth away from the Sun, and since Earth was no longer rotating, that the entire Western Hemisphere has been abandoned. This is not explicitly mentioned; we see a CNN clip at the beginning and hear American-accented voices explaining the catastrophe to us, but after the prologue, the English-speaking voices we hear are in British, Australian, or Indian accents. Both North and South America are gone in this future, and no reference is made to this fact.

The only other racially distinct character is a half-white, half-Chinese man from Melbourne named Tim, played by American actor Mike Kai Sui [3]. Poor Tim is the victim of much of the gratuitous comedic relief throughout the movie, though he gets his moment of heroism toward the end (saving the life of Liu Qi, who is prepared to sacrifice himself). 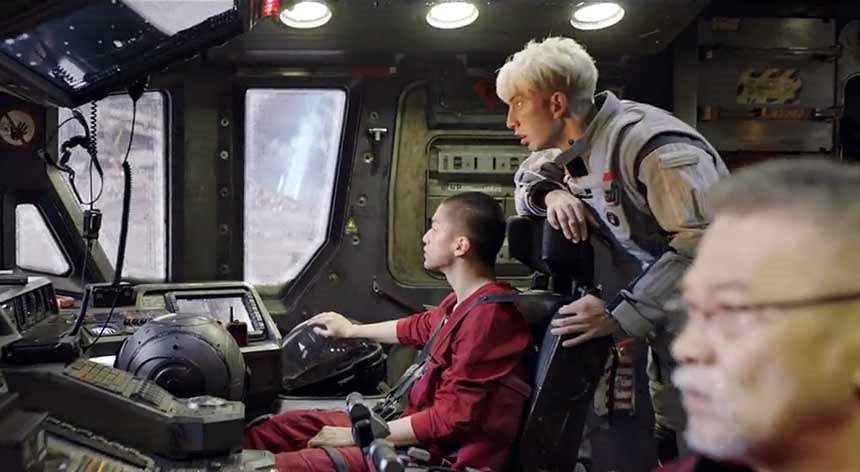 There are two moments in which characters fearfully exclaim, “I want my mom!”, and Makarov and Tim are the ones to shout it. It is, however, a subtle detail, and other characters do goofy things at times. Aside from Tim, who is half-Chinese, the movie does not so much make the West look bad as put it in the background. It is America’s absence in particular that stuck out to me, as an American.

The voice to which Liu Peiqiang speaks as he attempts to find a way to save Earth from colliding with Jupiter is a suave and intelligent-sounding French voice. When, towards the end, the Chinese need help from any and all nearby workers to help them with their last-ditch effort, the workers who respond represent the world: Germans, French, British, Indians, Filipinos, Japanese, and others come to their aid. Those who have seen the trailer will have seen a ramen-eating Japanese worker committing suicide after everyone is told that the Earth will be pulled into Jupiter’s orbit. It is ultimately only the Chinese who are willing to work to try to save the Earth, even when failure appears certain. At one point, our heroes enter a facility and pass a group of Filipinos running out to enjoy their final days of life.

Since this is not a man vs. man story, but about what remains of mankind joining forces to save Earth, the scenes featuring gunfire are for other purposes. Firstly, a machine gun is used by C171-11 to propel some of the group upward while they are on the remains of the Shanghai Tower. In another scene, a member of the team uses her weapon to destroy the reactor core they are transporting, saying “no more death.” The leader empties his weapon into the distance out of fury as a response. Then, of course, there is that brief scene with the poor Japanese truck driver.

If the movie has an antagonist besides human fear and doubt, it is the AI that runs the ship. Liu Peiqiang must deal with the increasingly frustrating machine as it robotically states that there is no hope. It is also responsible for locking nearly everyone on the ship in their hibernation chambers, leaving Liu Peiqiang alone. The AI has no interest in saving the Earth, as on the ship it wields near-total power. As in Interstellar, the ship contains records of human history and the means to recreate humanity on another suitable planet.

The Wandering Earth is a Chinese movie meant for Chinese audiences, released on Chinese New Year, and it is meant at least partially to be appropriate for children. Many Chinese viewers doubtlessly understand that this is how their government wants them to understand themselves: destined to govern the world. But how many saw it and did not raise an eyebrow? Given the deadly challenges that mankind faces on the real planet Earth, in our own century – the environment, depleting natural resources, the threat of nuclear war, and so on – can we imagine that they will be solved without a high proportion of white Europeans?

There is a moment, right before Makarov’s unfortunate demise, when he and Peiqiang are outside the spacecraft and Makarov comforts himself by saying that although he has never seen the world’s natural beauty with his own eyes, he will one day view the Earth’s lakes through the eyes of his descendants. This concept is far more meaningful than the boring platitude about “hope” that is mentioned far too often for my liking. More even than giant, world-propelling thrusters and underground metropolises, it is difficult for me to imagine a future civilization without white America. In this imagined future, my descendants do not exist, and my eyes will never explore the underground tunnels or frozen landscapes scattered across the Eastern Hemisphere.