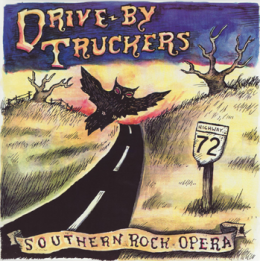 When I was growing up in the ‘80s, I considered Bruce Springsteen to be a buffoon. Watching him prance around in the video for “Dancing in the Dark [2]” at the age when you think GI Joe is where it’s at embarrassed me profoundly, and made me feel embarrassed on behalf of those around me who were mesmerized by this spectacle. It ended up taking me about fifteen years to realize that Springsteen was indeed a clown, but that this clownishness could be overlooked for the sake of appreciating him as an artist. His music was also frequently clownish but, given an understanding of his artistic arc, one could ascertain some hokey trappings in an album like Darkness on the Edge of Town, but for the most part acknowledge the gravity and genuine artistry lying therein.

This essay is not about Bruce Springsteen. Instead it is about a band that has undoubtedly been influenced by him: the Drive-By Truckers (DBT). Like Springsteen, I had dismissed this band when I was younger (my early 20s) because their shtick was hokey, but I found myself listening to their second album, Pizza Deliverance, quite frequently these last few months. This album came out in 1999 and has a few duds on it, but it also has some really great tracks. Songs like “Uncle Frank” give an unostentatious account of rural life with a catchy Southern rock backdrop.

After enjoying Pizza Deliverance so much, I decided to pick up a few of the band’s other albums. One of these was Southern Rock Opera, which is a concept album about Lynyrd Skynyrd. This album came out in 2001 and is regarded as the Drive-By Truckers’ masterpiece. If you had been a DBT fan when this album came out, you might have just shrugged off the lyrics and the pomposity of the concept, because the music, for the most part, is very good. However, listening to this album in 2019 from a Dissident Right perspective is going to trigger countless red flags.

The first clue that something is amiss on this record is its obsession with George Wallace and contempt for Wallace as a “racist.” There is even a mention of the fact that Wallace reversed many of his positions later in life but according to the album’s primary songwriter, Patterson Hood, Wallace can never be forgiven (or escape damnation, according to the Southern Rock Opera narrative) because his ambition caused him to “turn a blind eye to the suffering of black America.”

At this stage in the band’s career, and at this point in history, its understandable that Hood and his band were trying to affirm their Southern roots while not trespassing against any sacred cows of the politically correct culture of the time. Hence, this ultra-cringe-inducing lyric at the end of the song “The Southern Thing”:

I heard the story as it was passed down
About guts and glory and Rebel stands
Four generations a whole lot has changed
Robert E. Lee
Martin Luther King
We’ve come a long way rising from the flame
Stay out the way of the Southern thing

Thematically, this album is pretty myopic. It focuses more on the Drive-By Truckers themselves than it does on Lynyrd Skynyrd. And even though George Wallace is unnecessarily demonized as someone who brings down the distinction of “racism” onto the South as a whole, as a villain he does not act in contrast to Skynyrd. Instead, he is a counterbalance to the redeemer figure of this rock opera: Neil Young. For some reason, Patterson Hood and his band interpreted Neil Young’s appreciation of Lynyrd Skynyrd and his laughing off of the lyrics of “Sweet Home Alabama” as the saving grace of what, historically, might be deemed a hopelessly racist band. Unbelievably, this trope is reiterated throughout the album. 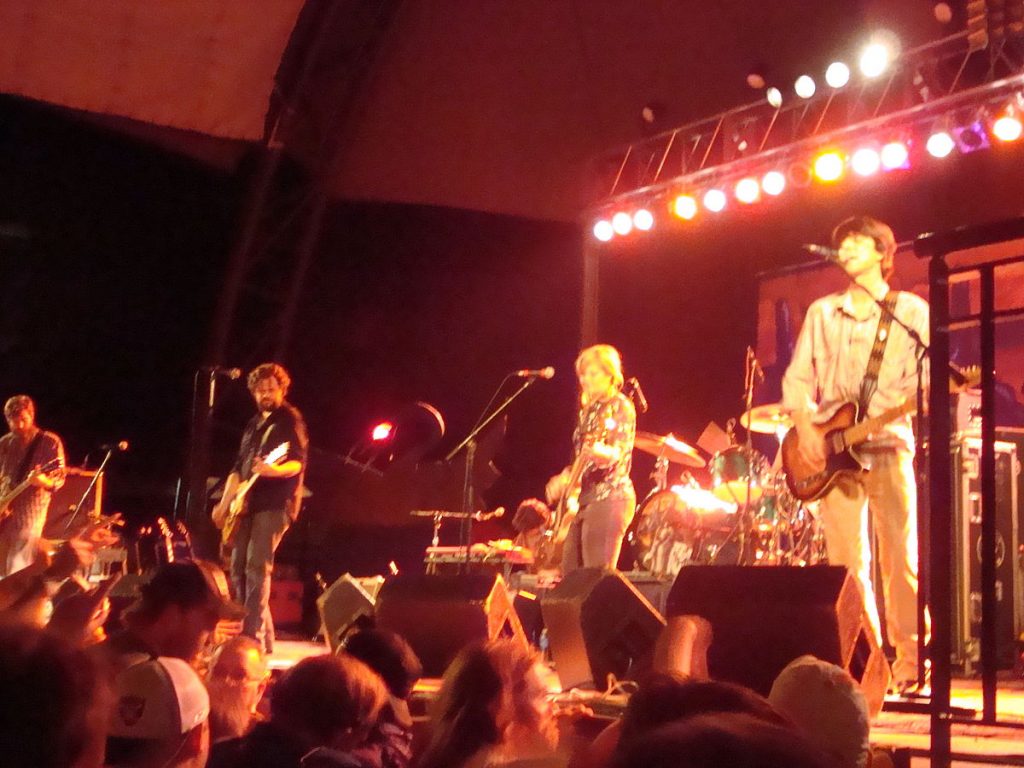 All this is embarrassing, but to some degree understandable, if you imagine a Southern indie rock band that’s trying to find some small way of celebrating its roots without being chastised by its fans and the liberal media. Any of those fans listening in 2002 hopefully paid close attention to the aforementioned “Southern Thing,” especially the line, “Ain’t about no foolish pride. Ain’t about no flag. Hate’s the only thing that my truck would want to drag,” because at this point in their career, the Drive-By Truckers could, like Springsteen before them, claim that there was a class issue at stake and that their liberal posturing was ultimately grounded upon that. Unfortunately, those fans who had been there from the beginning were going to realize that the truck ride mentioned in those lyrics was a metaphor for what the band was going to do to them; after all, the truck wants to drag “hate,” Drive-by Trucker fans are primarily white, and according to 2019 standards, white people are widely considered the embodiment of hate itself.

There is an Amazon review for the Drive-By Truckers’ latest album, We’re an American Band, that states succinctly and cleverly: “A southern man don’t need Pat Hood around.” This review and the antifa reviewers who attacked it should indicate exactly where the Drive-By Truckers stand in America today. If you want Patterson Hood’s first-hand account of the band’s transition into full-SJW mode, you can read his essay “Into the Perilous Night [4]” at The Bitter Southerner.

In this essay, Hood describes becoming a liberal in the 1990s after a brief period supporting Ronald Reagan, and then quickly shifts gears to describing how the band performs with a Black Lives Matter banner on stage. It is an interesting essay to contrast with the more tepid posturing of Southern Rock Opera, because in the latter, the idea that racism is a sin that one cannot be absolved from is put forward amidst a myriad of rock n’ roll nostalgia. Hood’s essay and We’re an American Band put forward the case that all whites are guilty of this sin until they prove themselves otherwise by way of prostration. All other musical and lyrical considerations take a back seat to this agenda.

Hood and his bandmates are certainly eager to prostrate themselves, but they also crave accolades and fanfare – Into the Perilous Night tallies eight instances where the band’s SJW anthem “What it Means” was played or lauded. Also described in his essay is the typical catatonic state that all cat ladies and NPCs experienced after the 2016 presidential election:

It was one of the worst nights I can remember.

The next day, we all wandered around in a daze of disbelief and depression. Now, everything was different. We had no idea what to do or what our role was to be in this new world we had awakened to. I walked around in a daze. Back home, my wife couldn’t stop crying, and our kids were depressed and confused. My flag was at half mast, just like the one on our album cover.

Hood also states in his essay that his only problem with Hillary Clinton was that she was a politician who was past her prime. How embarrassing is it to write a sniveling essay like this in 2016 and then realize three years later that, outside of avoiding a proxy war with Russia via Syria, we’ve gotten exactly the same sort of neocon globalist nonsense out of Trump as we would have from Hillary or Jeb? Why couldn’t Hood let his band go quietly into the night? All bands suffer from the law of diminishing returns. There’s no reason to try and make a greater spectacle of yourself as you sink into irrelevancy.

It seems like every band, no matter how irrelevant (I’m looking at you, Mudhoney), has gone out of their way to signal against Trump and his base. Why do I feel compelled to single out this one guy and his band? I think there are a few factors.

First, I think DBT share the neoliberal globalist agenda, and their hatred of white people goes beyond merely hating Trump. Hatred for Trump from the media and entertainment industry is really just hatred for Trump as some sort of avatar of white people, and as Trump’s base dwindles, the only people who will have anything seriously invested in the long game will be the media. It just doesn’t seem like people who purport to be motivated primarily by artistic reasons will (or should) have the fortitude to overextend themselves into politics for a long duration unless they have a pathological contempt for their own ethnic group (or are Jews, obviously).

Second, like Springsteen and a handful of others, DBT had made a conscientious effort to be the voice of dispossessed white people; self-identifying as a “Southern rock band” pretty much cements this, hence their betrayal of their base – much like Trump’s – is that much more egregious. And, unlike Springsteen, who makes way more money and garners way more prestige by being a culture warrior, there is no real reason to pivot this hard and insult their fans, unless they really hate them.

Third – and this may seem like a tangent, but I think it’s a criticism that goes to the heart of this band’s insincerity – they are a hopeless gang of sycophants. Of course, Hood stands head and shoulders above the rest. His homepage on his Website is a list of “Essential Shit for Survival -2018,” and consists of albums and books by people more popular (St. Vincent, Elvis Costello), more talented (Guided by Voices), and both more popular and more talented than him (Jeff Tweedy, David Lynch). When I went to look for video interviews with him, he always starts by listing a bunch of terrible bands (The War on Drugs, Alabama Shakes) that he’s opening for, whom he adores. As pathetic as it is to see a 55-year-old man spend so much time fawning over bands half his age, it isn’t very surprising. Southern Rock Opera was a sycophantic attempt to glom onto Lynyrd Skynyrd’s legacy and use it to selfishly advance his own band. In the process, Hood sold his soul while tarnishing Skynyrd’s legacy.

Maybe this band was never very good. I’m tempted to toss out the few albums of theirs that I own, despite enjoying the music. I wanted to write this essay weeks ago, when all this first happened, because, unlike the DBT fan who’s been dragged by the truck for years or decades, my ride lasted only a couple of months. But when I first considered writing about this, I wanted to talk about the nature of evil in art, because I perceived – and still perceive to some extent – what Patterson Hood is doing as evil. To some extent, he is an evil person. But after talking with friends about this, I realized that I wasn’t sure if he was evil or just a coward – and this, of course, opens up the issue of whether cowardice is necessarily evil. I don’t think the Drive-By Truckers deserve a full-on philosophical exegesis.

I realize that I’ve come full circle with this band in the same way I have with Bruce Springsteen. They are buffoonish, but it is a buffoonery of the doomed. Springsteen sold his soul after he had established himself as a legitimate and praiseworthy artist. At their best, DBT could really rock and maybe tug at your heartstrings a bit, but they sold their soul before creating anything of any real substance. There is no artistic arc for them; musically, they will continue to churn out the same insipid album they have for the past ten years until they quit, and some mulatto chick who likes Cardi B will say, “Who the fuck is Drive-By Truckers?” Nice.