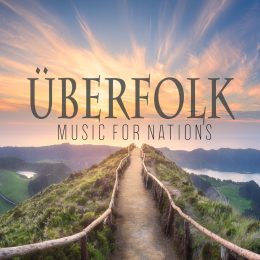 The cover art of Überfolk [2]‘s debut album, Music for Nations, depicts a winding path over hills, focusing the eye on a distant central point, implying a journey towards an ideal. Such a journey nonetheless requires us to traverse over land and soil, through the brush and bramble of earthly life. This provides a fitting image for the music contained in this two-album project, as Music for Nations is indeed about people with roots, people called to a vision, and people with a common heritage and a common destiny.

Contrast this approach with modern art that, by definition, cannot be grounded in any specific ethnic perspective, unless that perspective is ironic or fetishizes a non-European culture. Modern art remains stuck in nihilistic cerebral abstractions, open to endless “interpretations.” Specifically in the case of music, we hear increasing moves towards simple rhythms and nonsense “goo goo ga ga” lyrics marketed worldwide to consumers of music products (I hesitate to call them songs) so that “everyone” can enjoy. In short, music is becoming fast food.

Überfolk’s ambitions are much needed at this moment in history. While the project does issue a call to peoples of all backgrounds to reclaim their own heritage and push back against grey global consumerism, it nonetheless comes from two people of European heritage, and thus unabashedly carries the markers of their heritage.

Main songwriter and vocalist, George Burdi, and lead/background vocalist, Cat Weiss (known on YouTube as Philosophicat [3]) collaborated with various instrumentalists and songwriters to create Music for Nations. The work demonstrates how to navigate the world we currently live in — not by washing away your heritage and subsuming it into a synthetic, scrambled multiculti notion, but by doubling down on it. The old saying about religion, “Many roads may lead to the same mountaintop, but you must walk one road to arrive at the mountaintop,” applies even more so to experiencing your full humanity by experiencing the particular heritage of your folk. 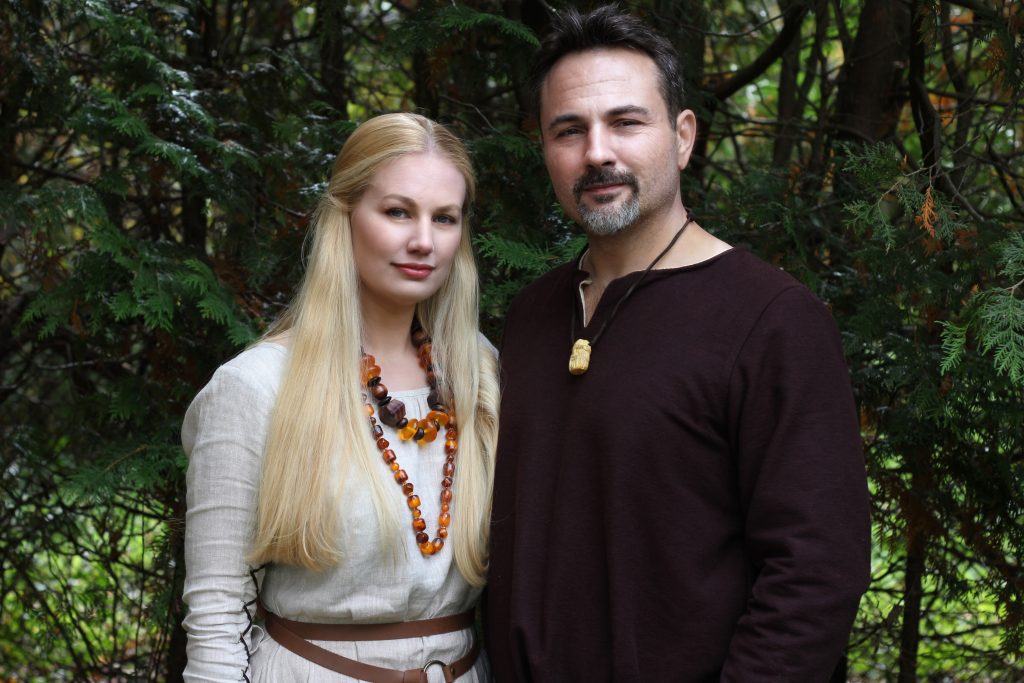 The music begins with “Präladium — Der Weg eines Kriegers” (“Prelude — The Way of a Warrior”), a track that serves as the album’s overture. We first hear a crackling fire, which then gives way to a lush piece of music centered around orchestral strings. There’s a film score quality to “Präladium,” and towards the end, a harpsichord figure wafts in. The cutting and distinctive tone of the harpsichord is one that will appear repeatedly throughout the album, whether in the form of the instrument itself, or else the plucking of crisply-recorded acoustic guitars. These sounds conjure sentiments both courtly and folksy, a perfect frame for the project. This first song ends with a return to the sound of the fire, along with thunder in the background, bookending the piece in the raw power of nature. With these themes and images established, the album’s tone is set.

Much of what follows can easily lend itself to complementing film and video productions, and is perfect for soundtracks.

The second song, “The Warrior Poet,” continues some of the motifs established in “Präladium” by opening with a shimmering acoustic guitar, here a tonal cousin of the cutting harpsichord heard in the prelude. This moody arpeggiation paves the way for George Burdi’s voice to enter, a deeper contrast to the brightly layered guitars. An ambitious refrain with richly stacked vocals introduces Cat Weiss’ voice, serving as the ethereal feminine counterpart to Burdi’s earthy timbre, who sings the refrain, “Where is the warrior poet?” We search for voices to provide wisdom and rouse us to defense in this time of great trials in the Western world.

“Watching Mind” is anchored by the rhythmic stabs of a deep bass drum, a primal and tribal sound sure to rouse listeners who enjoy neofolk. “Arcadia” continues in this vein, a sister song to “Watching Mind.” With a slower tempo and reflective character, we’re infused with a yearning for “the forests of Arcadia,” an idyllic and natural way of life.

“My Ancestors” paints an image of the singer confronting a line of his forebears in a field, a powerful notion and one that is, again, largely missing from anything presently passing for popular arts and entertainment.

In “Law of Life,” Cat’s voice rings clear and strong, especially in the latter portion, where she not only doubles with Burdi but also sings counterpoints, weaving in lines that respond to and embellish the main vocal.

“Old Souls” again speaks to our moment in history, in this case through the lens of reincarnation and eternal recurrence. Consisting of lines like, “We were born for this epic moment / We have come as the bringers of the light,” this song reflects a mindset running throughout the album, a call to rediscover and defend our roots.

While well-intentioned in terms of themes, Burdi occasionally lapses into lines that are too literal and take the listener away from the poetry for a moment, one such lyric being the heavy-handed, “Life has a definite purpose.” I wanted to hear imagistic language evoking that sentiment, rather than a statement.

The following track, “Walk with Giants,” boasts a strong vocal performance from Burdi, much of it delivered in a rich and pleasing lower mid-range, a sweet spot of his voice. Sailing on the strums of a festive-sounding acoustic guitar, and supported by string pads and celestial backing vocals, there’s a bright and hopeful tone here.

The neofolk elements continue in “Away,” a marching rhythm underpinning incantatory vocals from Burdi and Weiss, followed by “The Final Roar,” which concludes the first half of this double album.

A fitting resolution, “The Final Roar” opens with an inviting harp pattern and Weiss’ vocals calling out in ringing and operatic tones, one of her highlight performances. The anticipation leads into a lilting march, which recedes into quieter sections before returning with added layers of strings and percussion, proving to be one of the most dynamic songs of this project.

The second album starts with “Stardust,” the guitar here reminiscent of medieval lutes. Conjuring a distant and yet familiar past, we find mythic themes in the lyrics such as, “Stirred from deathly slumber / The embers back to flames.”

“Hyperborean Sun” follows, beginning with a slow acoustic guitar figure that would sound at home on a metal album. Featuring a rhythmic change for the rousing refrain, one of Burdi’s strongest vocal performances, and a grand outro with percussive echoes reminiscent of armies marching over hills as Weiss’ voice glides above, it’s no wonder they chose this compelling track as their first release to tease their audience earlier in 2019.

Another standout song is “Waning Days,” moored by a prominent whistling refrain, Celtic in its sound and quite memorable. The layered vocals provide one of the most charming examples of Burdi’s and Weiss’ voices meshing.

“Waiting for the Fall” has a sound and delivery evoking old political folk songs. Somewhat dark and accelerationist in its lyrical themes, mentioning “impending civil war,” this short song meditates on very real hopes and fears that people wrestle with in our day and age.

The following song contrasts these sentiments with a transmission from another epoch. “1916” tells the story of a young man who volunteers to fight in the First World War — or, as more are coming to understand it, the first part of the European Civil War.

A march that is lifted by string pads, “1916”’s atmospheric production provides another offering that would fit in beautifully on a film soundtrack. A gratifying harmonic change comes late in the song, after the three-minute mark, as the strings shift to higher notes and Burdi sings:

Though it wasn’t my fault
And I wasn’t to blame
The day not half over
And ten thousand slain.

The song may have benefited from this harmonic shift also appearing at another, earlier juncture, providing a verse-chorus-verse-chorus structure, as opposed to only appearing once towards the end.

Overall, in some of Music for Nations’ songs, my ear wanted to hear more harmonic transitions and changes, a note that also applies to the following track, “The Sun Invincible.” While the vocals build with additions and variations, the same underlying chord progression plays on the guitar, unchanging for the entirety of the song’s four and a half minutes.

The lyrical themes of “The Sun Invincible” speak to the album’s essence, painting a picture of the Sun witnessing all of the triumphs and hardships of earthly life, the grand play we all find ourselves in. Beyond and behind the events we experience exists a structure and order to align with, a higher destiny, as evidenced in one the album’s fundamental lines: “Focus on the inner light / The Sun is rising every night.” The answers and guidance lie within.

“This Death” opens with lines from Poe’s “The Raven” as read by Jason Köhne of the YouTube channel, No White Guilt [5]. We’re once again treated to far-off angelic voices and a subject near and dear to European peoples, the changing of the seasons, with a particular focus on autumn. The metaphor of death and rebirth dovetails well with the album’s overall themes. Multiple acoustic guitar lines dance together, sometimes with Burdi’s voice, but the piece would benefit from these elements being more rhythmically synced.

The album’s capstone, “Song for Sweden (Europa!),” offers an apt final statement. Referencing gods and kings, it again reflects the moment in time we’re in, mixing mythical ideals to strive for with the sobering realities Western civilization now faces.

Piano chords provide a fresh sonic palette as Weiss sings the opening lines, “It’s hard to reckon / How it all came down to this.” Burdi’s voice enters to blend with hers, then he sings his own parts, creating a performance that would befit the grand stages of our Western theaters and concert halls. 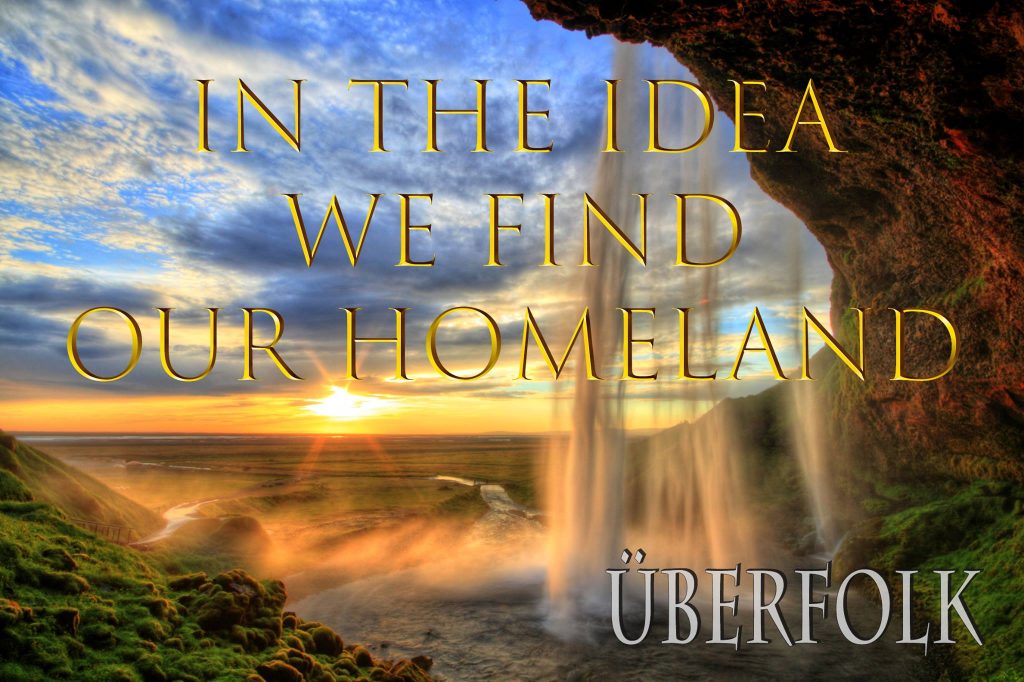 The album is indeed “music for nations,” but with a particular focus, coming from a particular point of view that’s natural to the two white people behind the music. Sweden serves as Überfolk’s muse in this final song, as well as being an example of the wider European world.

“Song for Sweden (Europa!)” develops into a march with dramatic percussion, orchestral instruments, and Burdi and Weiss’ choral voices ascending to the heavens, completing the project and underscoring what you’ve been listening to the whole time: a love letter and wake up call to Europa and her people worldwide.

Presently, “Music for Nations” can be purchased as a double digipak from Das Zeughaus [7], OPOS Records [8], and 4uVinyl-Versand [9] in Germany; from Midgård Records [10] in Sweden; or worldwide by e-mailing the label, VIR Rekords.

More distributors will be added soon ,and up-to-date information can be found at the Überfolk Website [2], or on the band’s Facebook [11] and Twitter [12] pages. The digital download can be purchased from Bandcamp [13], and comes with a PDF of the 28-page booklet.

Also please look for the album on Spotify, iTunes, Amazon.