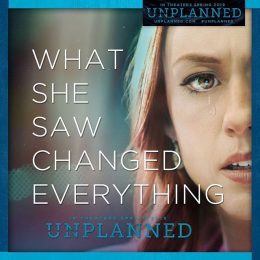 Unplanned [2] has recently made a name for itself as an effective anti-abortion movie which has achieved success and popularity despite being suppressed [3] by the Leftist media. It is an overtly Christian movie, based on a true story, and in many ways delivers what one would expect from a Christian movie: the pious characters, the constant sermonizing, the moral quandaries, the heartrending drama, and the inevitable redemption. The plot, tried and true as it is, is as old as Paul the Apostle:

MIDDLE: Something triggers Wicked Person to renounce his wickedness.

In our story, Abby Johnson (played by Ashley Bratcher) volunteers as a counselor at a Planned Parenthood clinic in Texas. Despite being a Christian herself and facing open disapproval from her family, she believes in her work. Slowly, however, she learns what really goes on at Planned Parenthood, and it has nothing to do with championing women in crisis or making abortions safe and rare. Her Hispanic boss Sheryl (played by Robia Scott) is a villain known by her fading beauty, slick wardrobe, and poorly-applied makeup. She exhibits the kind of cold-blooded mission lust required to run a clinic which can kill dozens of fetuses in a day. She instructs Abby and other staff members to lie to patients and their families. She instructs her staff to call 911 to report protestors who are not violating the law. She encourages a pregnant Abby to get an abortion. Fearing bad press, she forbids Abby to call an ambulance when a patient nearly bleeds to death. It’s not long before this ghastly woman enters Cruela DeVille territory, minus all the cigarettes and cackling.

Most tellingly, after awarding Abby with Employee of the Year, Sheryl announces to the Planned Parenthood brass that their goal in the following year will be to increase abortions – as if this is a good thing. And when Abby objects, Sheryl formerly reprimands her.

Then, as indicated in the movie’s trailer [4], Abby finally sees what goes on during an abortion. She is so horrified she decides to quit Planned Parenthood forever. After this cathartic moment, Abby teams up with the anti-abortion protestors who’d been assembling outside of her office throughout the entire movie, and dedicates her life to fighting abortion. She spends the rest of the movie dealing with the guilt of having been complicit in twenty-two thousand abortions, as well as a lawsuit leveled against her by her former friends at Planned Parenthood.

Since Christianity in general, and the anti-abortion messaging of Unplanned, are highly unfashionable these days, the most skilled and/or well-known writers, producers, and actors will likely eschew a project like this one – and from a technical standpoint, the movie doesn’t exactly sparkle. Its performances range from wooden to competent. The actors are attractive, but lack charisma, making it hard to develop an interest in them. The writing is serviceable, but often heavy-handed, and lacks wit (“You did what you thought was right!” “Then why do I feel so ashamed?”). The pacing is fine, for the most part, but suffers during the middle, making a 110-minute feature seem rather long. The narrative is fairly tight, but becomes somewhat manipulative when it includes scenes meant to provoke a reaction rather than to further the story or develop the characters. The direction for the most part also lacks vision. From a technical standpoint, there isn’t much to find serious fault with in Unplanned, but there is little to praise in it, either.

Despite this, Unplanned has a lot going for it. For one, it has perhaps the most unsettling and terrifying opening scene in any movie I have ever seen. The climax, wherein Abby finally witnesses an abortion and renounces her career, happens not in the middle of the film, but in its first few minutes – which consigns most of the rest of the story to flashbacks. It’s not only Abby who witnesses the abortion; we witness it as well, all on ultrasound. I cried, and I never cry. I turned away, covered my eyes, and peered between my fingers whenever I thought it was safe. I know a reviewer shouldn’t resort to such personal and subjective impressions, but a scene so appalling makes objectivity impossible. It was entirely unwatchable – but in a good way. Directors Cary Solomon and Chuck Konzelman clearly wished to convey Abby’s horror when she witnesses an abortion up close. By utterly traumatizing their audience, they succeeded. This takes art to another level, and the directors deserve enormous credit for doing so. Too much would have had people fleeing the theaters, and not enough would have trivialized Abby’s reaction. I believe the directors hit it just right, and provided a truly unforgettable cinema experience in the opening minutes of Unplanned.

Another directing triumph is the way Abby’s second abortion is treated, which happened before she began her career at Planned Parenthood. It was done using a pill, which the Planned Parenthood counselor had told her would gently empty out her uterus. That was a lie, and the directors treat us to the ramifications of that lie by showing poor Abby in agony, spilling blood all over her bathroom. Between the shaky camera, the creepy atonal score, and the stark red-on-white contrast in the visuals, we have a scene that rivals the shower scene in Pyscho for visceral impact. I am sure the directors had that in mind when they concluded it with the image of a bloody and unconscious Abby stretched out on the tiled floor.

There’s a nice twist at the end of the movie as well, and if you are not already familiar with Abby Johnson’s story, you might not see it coming.

Putting aside any political considerations, however, this review should end here. Unplanned is a B+ movie that depicts a heroic woman who underwent a remarkable transformation under trying circumstances and went on to inspire real-world change. It would have gotten a C+ from me if not for the scenes mentioned above, as well as a few moments of endearing sweetness and heart that’s impossible to fake. For example, the scenes in which a heartbroken Abby shows up the protestors’ office to confess, and when she is forced to deal with her guilt, were handled impeccably by both the cast and the directors. The Christian redemption motif resonates with so many people because there is truth in it. It’s always uplifting to watch someone overcome themselves for the sake of something higher, both in life and in art. Dostoevsky gives us such an ending in Crime and Punishment, so such a redemption doesn’t necessarily have to be religious. It is in Unplanned, but this can be considered a predictable yet necessary trope of its genre. Within this genre, the redemption offered by Abby Johnson, Cary Solomon, and Chuck Konzelman is about as good as it gets. By considering it outside the Christian movie genre, however, the movie’s weaknesses become apparent. Compare it to its secular analog, Erin Brockovich, which sparkles on every level, for a particularly striking example.

Taking partisan politics back into account, however, Unplanned suddenly becomes a lot more interesting. Abby Johnson is a former insider at Planned Parenthood who wrote the book on which the movie is based. For any conservative or Right-winger, the dirt she dishes out on her former employers is entertaining as hell. As a White Nationalist, I loved watching the Planned Parenthood leadership getting exposed for the anti-human ghouls that they are. And if the directors or Johnson herself exaggerated a bit in this depiction, I don’t care. As I have stated before, Planned Parenthood is a fundraising tool for the Democratic Party [5], and one of the stronger links in the Leftist chain that is slowly asphyxiating legacy America. To weaken it or break it, for whatever reason, would be a Good Thing, to say nothing of all the white fetuses such an act would save. Unplanned gives that chain a righteous rattle and should be praised to the skies for it. A few more movies like it and, who knows? Maybe the Right will get some breathing room in America after all.

Another perk in Unplanned is how white it is. Very little airtime is given to non-whites in this movie—except in two cases, where both are villains. It’s never stated explicitly, but Christianity and whiteness seem almost one and the same in Unplanned, and both are portrayed quite positively. In today’s racially-charged, #OscarsSoWhite [6] cinema culture, an all-white good guy cast becomes nothing less than an iconoclastic statement for the Right. This may not have been Solomon and Konzelman’s intention, but Unplanned does little to block such a racial interpretation, if one chooses to have one.

At its core, Unplanned is more a political tract than a work of art. It sells Christianity and it sells prayer. It also demonizes the leadership of Planned Parenthood. That it does all these things well does not make it any less of a propaganda piece. The completely gratuitous image of the Planned Parenthood sign being pulled down in the end, like that statue of Saddam Hussein in Baghdad in 2003, should make this point clear enough. Unplanned also does more than merely entertain and inspire the pro-life crowd. During the end credits, the movie offers contact information for Planned Parenthood workers who wish to leave the abortion industry. It is, in effect, a brazen attempt to dishearten the Left in the culture wars by encouraging its foot soldiers to switch sides. In the credits, the movie claims it has already helped hundreds to do so. And this is despite an advertising ban on all but two cable television channels, a total embargo by Google, and a sudden unfollowing of the Unplanned Twitter account by thousands on the day of the movie’s release.[1] [7]

[1] [8] In a recent Senate hearing [9] before Senator Ted Cruz, co-director Konzelman complained about how the MPAA’s giving of an R rating to Unplanned hurt his movie’s chances at the box office. Since many Christians will not see R-rated movies on principle, Konzelman speculated that this was another dimension of the Left’s effort to suppress it. While he may be right about this, I find the rating appropriate. Given the graphic and unavoidably cruel nature of the opening scene, as well as the plethora of blood in other instances, and the scene in which a teenaged girl in stirrups nearly bleeds to death, no child should be allowed to watch this movie unsupervised.

Spencer J. Quinn is a frequent contributor to Counter-Currents and the author of the novel White Like You [10].