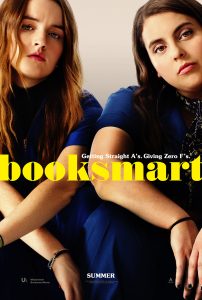 Superbad (2007) is not a great teen movie. The constant whining of the Jonah Hill character acts as a drag on the narrative. His selfishness, his braying voice, his chubby face, and his man-boobs test the viewer’s patience. But Superbad was good enough to have an impact in its time, and remains watchable. It has solid secondary characters, a compelling story, and enough social realism to remain of interest.

Now comes Booksmart (2019). Following the trend of the moment, this new film attempts to imitate Superbad, with updated Leftist politics and girls replacing the boys. It has the same “last day of high school” timeframe and even has an exact female replica of the Jonah Hill character: an obnoxious, overweight, annoying, and deeply unattractive young woman who unfortunately holds the same central role in the story.

The plots of the two films are very similar: the two misfit girls are on a mission to have all the high school fun they missed out on, because they were too busy being “good girls” who were “booksmart.” Weirdly, though, the two girls are not in fact “good,” “booksmart,” or smart in any other way. I would be tempted to call the two girls “lame” and “boring” – but that isn’t accurate, either. What they really are is badly written characters in a shit movie. Their personalities don’t make sense. Their friendship feels fake. They don’t resemble actual people. These are huge problems, and they instantly destroy any credibility Booksmart might have had. Nothing in this movie resembles real life.

What Booksmart does resemble is terrible musical theater. The film is super-gay. There are no chads, no skaters, no jocks – indeed, no normal males to speak of. There is no McLovin, the ballsy nerd who so enlivened Superbad. Such a character would be impossible at this sub-human level of filmmaking.

Booksmart is politically correct to the point of absurdity. It’s campy, stupid, embarrassing, and confusing. Nobody is attractive or sexy in the film. Nothing that happens is satisfying. There are no interesting fashions, no new teen trends, the girls’ rooms aren’t interesting, and nobody has a cool car. Instead of endless dick jokes, it has endless vagina jokes, which are wincingly unfunny.

The pacing of the film is terrible. The music, which comes in tiny, three-second bursts, often has nothing to do with what’s happening. It is so randomly placed and badly chosen a cool beat began to play in one scene, I felt my body relax for a second, as in, “Aw, finally something good” – but within seconds, it was over.

By contrast, there is a scene in Superbad when two of the bumbling teenaged boys wander into an adult party full of twenty-something bad-asses and smoking-hot chicks. As the teens realize where they are, the film goes into slow motion, and the intro to Ted Nugent’s “Stranglehold” begins to play. This cinematic trope has been done a million times before, but it still works, and put goosebumps up my arms.

The physical humor was another disastrous problem in Booksmart. In Superbad, Jonah Hill gets beaten up, knocked around, and hit by a car twice. Although it’s not my favorite thing to watch a fat kid get hit by a car, it wasn’t visually repulsive. In Booksmart, the overweight girl also falls down, gets knocked over, and flails around in various ways. The jiggling flesh was horrible to behold.

Booksmart was directed by actress Olivia Wilde. Before I saw the film, I heard several people mention this fact as if it would automatically recommend the film. “It’s directed by Olivia Wilde!” I don’t know what she has done before. She looks like an uptight lesbian. Why would producers assume she could direct? It turns out she can’t. But she is a narrative-enforcing feminist filmmaker, so millions of people are going to be subjected to this cinematic trainwreck whether they like it or not.

In the theater where I saw it, a trio of youngish women were sitting in front of me, and they did laugh every once in a while. I could feel their attitude was “It’s for us!” and so they were giving it every chance. How sad that this is their movie. I wanted to say to them, “This is what the Hollywood thinks of you.” They think you’re fucking stupid.

Booksmart did one good thing: It confirmed to me that we live in a time of complete cultural collapse. American popular culture – once the envy of the world – has hit rock-bottom. In my medium-sized city, Booksmart has been in wide release in theaters for over a month, which means that people are actually going to see it – apparently because there’s nothing better on.

Superbad feels like a classic in comparison. Whatever else it was, it tried to be a funny, relatable teen drama. It was somewhat original in its execution. But now they won’t even give us that. Instead, they pound us over the head with their imbecilic politics and incompetent filmmaking.