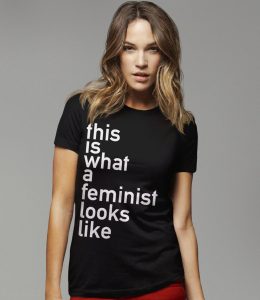 It is superficial thought that causes some to call themselves feminist or anti-feminist. The usual definitions of feminism, from womyn’s empowerment to sexual egalitarianism, serve to curtail thought – therefore we shall not define feminism here. Instead, we will look at synchronicities, to help us better understand our time and place.

When we examine feminist actions, we see continual petitions for “equality” long after women were given the right to vote, were legally assured of equal treatment in the workplace, and even privileged with rights of reproductive choice above and beyond what have been granted men. A feminist revels in her immodesty, her naggishness (which she mistakes for authority), and her aping of what she views as masculine behavior. The unfortunate male who calls himself a feminist, on the other hand, takes pride in his emasculation, his eager deference to the opposite sex, and his “reasonable” outlook on life.

At first, this may seem like a moral inversion – an attack on the natural order. But this behavior can be understood biologically, and not just culturally. At conception, fetuses begin in an undifferentiated state. A feminist will say that everyone starts off as a girl, in a show of her fixation on the superficial male member. But it is an undifferentiated state, and when development proceeds as normal, the sexual organs differentiate. The same blobs of cells become either testes or ovaries, and other blobs become either a penis or clitoris, depending on the natural signals propagated through the fetus.

Skipping ahead, toward the end of life, women are released from the menstrual cycle by menopause, and men’s testosterone levels drop. This is often believed to be the stage of a woman becoming matronly, and men’s retiring and becoming relatively inward-directed. Rather than an inversion, this is a return towards the “second cradle” and the undifferentiated state. This return does not – indeed, cannot – undo the history that shaped the body in the first place, but is instead like a sword returning to its sheath.

Western Civilization is also entering its old age. The City of Oxford was established in the eighth century, long before the Aztec or the Inca civilizations of the Americas, and even the University of Oxford predates them. If the youthful energy of our civilization, which we harnessed to conquer the globe, seems to have been spent, let this not be cause for despair. A civilization that has undergone menopause makes way for new generations.

And if it seems as though white women have turned against the natural order – preferring to ravenously consume all that has been built up, and like a bulimic, vomiting it out instead of accepting its sustenance – it is only a signal, much like the ones that differentiate fetuses in the womb. With nothing left to conquer, white men have grown complacent; even weak. What self-respecting woman wants a man who is unwilling to fight for himself and his own? What self-respecting woman is willing to be taken for granted, rather than considering herself a prize to be won?

There is no hypocrisy within a feminism that declares all manner of minor acts to be rape whilst encouraging the mass migration of foreign men into our nations. Rather, it is a consistent signal sent to the manchildren, that they should once again become men. With the world conquered, our science and institutions having spread across the globe, and with no frontiers left to civilize, we have become boring, bourgeois, and banal. We ought to cherish the fiery spirit of the white woman that manifests itself in this age as feminism; it wills to tear everything down and start again, just to get back the white man she once knew.