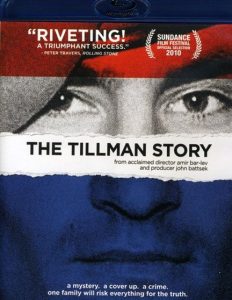 Pat Tillman of the 75th Ranger Regiment was killed in action on April 22, 2004 in Afghanistan. In the grand scheme of things, Tillman’s death was not all that remarkable. America was engaged in two wars at the time, and soldiers, especially those in especially dangerous jobs like the Combat Engineers or the Rangers, were being killed every day. Tillman’s death was big news, though, given that he’d previously been a professional football player for the Arizona Cardinals. In fact, he’d turned down a multi-million-dollar contract to enlist in the US Army as a Ranger following the 9/11 terrorist attacks.

Tillman was killed in a friendly fire incident. In war, deadly friendly fire incidents are not unusual or remarkable, contrary to what one might suppose. Not all combat deaths are some kind of poetic, pathos-filled event that happens while one is face-to-face with the foe [2]. The specifics of how he died [3] match exactly with something I recall in a training event on fratricide that I attended while in the service. To explain, fratricide most often occurs when one unit converges on another while they are in direct contact with an enemy force, and the two units have little to no direct communications.

Pat Tillman was posthumously promoted from Specialist to Corporal and awarded a Silver Star with a citation that heavily implied he was killed by enemy fire after carrying out heroic acts, and this story was maintained until subsequent investigations uncovered the truth. The fact that Tillman’s death was sanitized by the military brass is not unusual, however. During the Second World War, for instance, the private effects of lost aircrews were combed over by a team of people to remove prophylactic rubbers, pornography, any incriminating photos, and any possible evidence of adultery before sending those effects back to their families.

So why write an article about a risk-taking jock who got himself killed in a dangerous operation and an institution which has a history of sanitizing combat deaths? In short, Pat Tillman’s death and the subsequent cover-up can throw some light on the events that helped create White Nationalism 2.0. Before proceeding further, I must add that the Tillman family aren’t, as far as I know, White Nationalists, or even “on the Right.” Furthermore, this film is produced by the Weinstein Company and directed by Amir Bar-Lev, so it is decidedly presented from the Judeo-Christian – heavy on the Judeo – perspective.

Pat Tillman’s death and the timing of his military career do, however, lie at the intersection of community mourning rituals, the limitations of the military mind, the downside of “civil rights,” fake news, and the Jewish Question.

Star football players are the heroes of Middle America. Football players such as Pat Tillman and Chad Hennings, who serve in wartime, are held in even higher esteem. Pat Tillman’s story was much like that of the so-called “Greatest Generation” of the Second World War, when all sorts of famous people joined up and had illustrious military careers – actors Clark Gable and Jimmy Stewart both earned the Distinguished Flying Cross for their combat service in the Army Air Force, for example, and famous Yankees player Joe DiMaggio also served in the Army Air Force. Thus, when the public was told that Pat Tillman had enlisted and died heroically in combat, he seemed to be part of a long tradition, and Americans were reassured that things were still on track; Americans of all stripes were still heroes and patriots, and the American Dream was still realizable.

The Tillman Story depicts the community ritual surrounding the death of a soldier – the ritual of “the soldier as Christ.” The movie’s many scenes showing massive audiences of all-white fans honoring Tillman at football games, ceremonies, commemorative runs, and statue unveilings might seem somewhat artificial, but these rituals are deadly serious for those who take part in them. They bind a community together and allow it to mourn. Pat Tillman’s death represented everyone – at least everyone white – who was lost in the wars in Iraq and Afghanistan. The story of a soldier who comes from the core stock of a community serves to reinforce it, even in death.

The scandal surrounding Tillman’s death isn’t because he died in a typical fratricide incident, or even that the military brass tried to sanitize his death. All military deaths are sanitized, to a degree. But the hows and whys of the cover-up lay bare the limitations of the military mind since the coming of “civil rights,” although the public had no vocabulary to express this problem until the Dissident Right came along.

This film shows just how limited the military mind can be, and how much more limited it has become since it absorbed “civil rights” ideology. A general officer is not necessarily a thinking man. While general officers in the military are often very smart in some areas, one needs to remember that they got ahead in the organization primarily by following orders, not by being innovative or contemplative. Since the “civil rights” revolution, the biggest order they must follow is the enforcing of “equal opportunity” – most especially the imperative to ignore the fact that desegregation has brought some big drawbacks. If a person in a hierarchical institution buys into a lie such as “civil rights,” it becomes easy to misrepresent other things as well.

Lieutenant General Philip R. Kensinger, Jr., who took the fall for the scandal, admits to the “just following orders” aspect of this in the film:

My wife says, “I’m too much of a soldier.” I’ve been doing it, you know, since 17. And when somebody tells me something, tells me to go do something, you know, you say, “In the Army you salute and about face and go get it done.”

Generals aren’t geniuses. Much of making it to flag rank involves saluting, about facing, and furthering the Big Lie of “civil rights,” as well as perusing military policies that help Israel, South Korea, and other countries while neglecting vital American interests.

While Pat Tillman’s death in Afghanistan was heavily investigated, another incident involving him has been somewhat forgotten, although this incident exposes the “civil rights” fraud as well as the consequences of “fake news.” This was the rescue of Private First Class Jessica Lynch, which Tillman participated in as a Ranger.

During the beginning of the invasion of Iraq in March 2003, PFC Lynch was in an Army convoy that took a wrong turn and was then ambushed by Iraqi forces, after which she was taken prisoner. Her company consisted of lightly-armed support troops, and they gave as good an account of themselves as troops in such circumstances could. The initial media reports, conveying the Pentagon’s account, claimed that Lynch had fired her rifle at the attackers until she ran out of ammunition. It was also said that she was beaten and tortured by the Iraqis after being captured.

Lynch corrected the record after she returned home. It turns out that she never fired her rifle at all because it jammed. And Lynch’s injuries, which the US military claimed were the result of Iraqi abuse, were caused when the vehicle she was riding in crashed during the attack. Medical reports suggested the possibility that she was raped by Iraqi soldiers while unconscious following her capture, although this has been disputed. What is undeniable, however, is that the Iraqis saved her life, and by Lynch’s own account, treated her very well.

Lynch was held and treated in a hospital in Nasiriyah until she was rescued by US forces on April 1 – forces which included Pat Tillman’s Ranger unit. Tillman became frustrated by the way in which the military treated the rescue operation as a showy propaganda opportunity. The Rangers had to wait until a camera crew arrived, for instance, so that the rescue could be captured on film. Tillman eventually came to believe that the invasion of Iraq was itself wrong from the start.

Although Lynch did nothing wrong, she demonstrates a major problem with putting women in combat positions. (All soldiers, regardless of rank or specialty, who served in Iraq in 2003 saw combat in that they were all fired upon and lived in frontline conditions.) When a woman is captured, the entire nation’s honor is put on the line in a more extreme manner than when the prisoner is a man. The military thus diverted enormous resources into rescuing Lynch. Additionally, the media firestorm surrounding her story is not unlike that of Specialist Melissa Rathbun-Nealy [4], a woman who became a prisoner of war during the 1991 Persian Gulf War, so it wasn’t unprecedented.

As the truth about what happened to Lynch and her outfit slowly made its way into the public’s consciousness, something else occurred: a black New York Times affirmative action hire named Jayson Blair [5] was exposed as a long-time plagiarist and news fabricator. Blair had written articles about the Lynch family, claiming that they lived among tobacco fields and other such nonsense. It turned out that he had never even been to Lynch’s home. Blair’s lies would not have been discovered except that every reporter was crawling around the area at the time, so his fabrications were quickly discovered. If one believes in “civil rights,” one always misreads data, and it makes “fake news” easier to manufacture and spread.

The Global “War on Terror” & the Jewish Question

Pat Tillman’s death is a symbol for the deaths of thousands of other Middle American whites in the Global War on Terror – a war where Tillman served in both major combat theaters. The initial patriotic response to 9/11 and the bitterness Tillman felt over the Iraq War were not unusual among American whites. Tillman’s emotions were a genuine response of a patriotic, civically virtuous white to a society that was – and is – controlled not by its own people, but by a hostile, Jewish elite. This elite is more concerned with its own agenda than with the common good of those it rules.

The Global War on Terror was the result both of Jewish migration to America in the latter part of the nineteenth century and resurgent Islam. But the rebirth of Islamic militancy would not have been an issue for America were it not for the fact that Jews in government – such as Emanuel Celler, among many, many others – got the 1965 Immigration Act passed, which gave Arabs and other Third World people access to the United States. Thus, 9/11 is every bit as much the fault of Emanuel Celler and Jacob Javits as it was those of the Arabs who actually carried out the attacks. Likewise, the Iraq War was planned and pushed by Jews in the Pentagon’s Office of Special Plans. From an American perspective, attacking Iraq made as much sense as attacking China in response to Pearl Harbor. But from a Zionist perspective, exploiting Americans’ anti-Arab anger in the wake of 9/11 to take down a regime hostile to Israel was entirely rational.

Pat Tillman represented us all. A great many people looked up to this football hero turned Ranger, who then became a fallen hero. He was however, lied about, and as a soldier, lied to. But these lies were just a small part of the Big Lies behind America’s Middle Eastern policies.