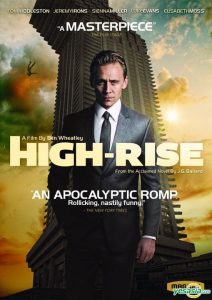 The numbers are never consistent, but there is a general consensus that given a complete, Venezuelan-style financial collapse and the subsequent loss of order and infrastructure, any Western society is just a few days from anarchy. The truth of this theory may be close to being tested in the interesting times in which we live, and it is natural that art will occasionally depict scenarios in which the loss of the structure that prevents a war of all against all is examined and imagined. These artistic forays may come to form a part of a cultural early-warning kit which is looking increasingly needful, and the British movie High-Rise is therefore essential viewing. Jonathan Bowden even mentioned the novel upon which the film is based in his last-ever interview [2].

High-Rise is the fourth film by British director Ben Wheatley, and is based on the 1975 novel of the same name by J. G. Ballard. Released in 2015, the movie occupies that familiar cinematic stall of critical success and commercial failure, but it more than repays inspection. It is a dystopian film in a world in which “dystopian” is a word long overdue for retirement. We are already living in a dystopia. There is nothing immediately challenging in presenting dystopian visions in art. But this is no comic-book vision of a future metropolis. High-Rise offers a clearer vision of Western decline.

The film follows Laing, played very understatedly by Tom Hiddlestone – Loki in the Marvel franchises – as he moves into a tower block in an authentically-rendered 1970s England (I know it looks like 1970s England; I was there).

At first, Laing’s fellow residents seem to be an average collection of professionals living conveniently just out of town, but tensions are there from the start in the social transactions. The very first party Laing attends becomes an anarchic teenage mess. There is always something not quite right about Laing’s introduction to the block; every scene has an oddity, a stitch out of place, a foreshadowing of the radical otherness to come.

It soon becomes apparent that the buildings’ levels are more than just successive floors; they represent different social classes. At the bottom – “in the shadows,” as one character puts it – the power regularly fails, and there is a sense of incipient revolution. As the elevator climbs, so too a class hierarchy becomes clear, and at the top – living in the terraced roof garden apartments – is the building’s architect, Royal, played by my mother’s idol, veteran English actor Jeremy Irons.

It is not long before Royal – who employs a brutal thug, Simmons, to do his summoning – requests an audience with the singular arriviste Laing. On stepping out into the bright sunlight on the roof, the first thing Laing sees is a black goat. Royal shows Laing his vision for the building, but it will soon prove to be hubris. Laing follows his architectural explanations in a detached way, there but not there.

Despite seeming an innocent abroad, Laing is hardly Candide. The first plot point falls while he is having unconventional sex with Sienna Miller’s character, Charlotte Melville, but his laconic innocence separates him from the decadent collapse gradually happening around him. The power cuts out in the store, and we cut to a Regency–themed party, with the socially superior residents in Louis Quinze finery, with the exception of Laing, incongruous in his 1890s-style dark suit and thin tie. A chamber quartet is playing ABBA’s “SOS [3].” The famous pop song – which the iconic Swedish band allowed Wheatley to use – appears again later in the film in a haunting rendition [4] by British band Portishead.

A note on the score: The music is totally incongruous at all times, from snarling techno while Laing showers to bombastic Wagnerian chords while he sits quietly in his office. Party dance music is not disco, but scatterbrained, low-talent punk. Wheatley used music to discomfort in a previous film, Kill List – if its score can be called music – and here it serves to accentuate the sense of everything being like time for Hamlet: out of joint. It is a stroke of brilliance to use the discordant, jangling “Industrial Estate [5]” by The Fall for the credit sequence.

Amid the decadent beauty of the party scene, Laing is roughed up by Simmons. Violence always lurks where there is an oasis of calm, and that violence begins to infect Laing. He is some kind of forensic doctor, and when an arrogant student of his, Munrow, faints and hits his head during a gruesome autopsy, Laing sends him for a brain scan, later lying about the results and telling him that “we’ve found something” when in fact the scan showed no problems. Munrow later commits suicide, jumping from the top of the high-rise, effectively killed by Laing.

The building’s parties become more decadent and violent. Wilder, a boorish Welshman making a never-to-be-finished documentary about injustice, beats Simmons up. An actress’ dog is drowned in a swimming pool. The residents are beginning to turn from their lives and on each other. There is a shot in the supermarket of fresh peaches gradually becoming rotten as the camera pans over the display. Miller’s character says, “It’s as if everyone suddenly decided to cross some line.”

High-Rise is a movie which shows societal dissolution, and scene by scene the breakdown of social relations moves from friction through hatred to violence. The gradation is perfectly handled, as one transgression shades into something worse. After twenty or so minutes, there is something very horrible about nearly every scene, enough to place the viewer in serious mental discomfort.

Amidst the anarchy, Laing needs an anchor point. He decides to paint his apartment. As even the meager order in the block falls to pieces, Laing concentrates on getting his paint. His thought process amidst anarchy reconfirms him as other and able to remove himself from the tumbling chaos around him. After finding a paint sampler he likes, he goes to the supermarket, now a battleground, and fights others for the last tin of the color he needs.

Amid the collapse of social stasis, Laing turns to the building, which slowly becomes the main character. When Royal fires Simmons, the stooge replies, “I don’t work for you. I work for the building.” As Laing finally accepts love from one of the women from the lower floors, they laze in bed together, and she questions Laing: “I heard you out there. Who were you talking to?” “No one,” he replies. “Just the building.”

Observing the proceedings throughout the film is Charlotte Melville’s young son, Toby. He is precociously intelligent – “we call him the little professor” – and acts as a recording angel for the entropic disintegration of the block. Apart from Laing, he is the only character who seems self-reliant – a trait which is noted by the residents, as Wilder addresses Laing:

Wilder: The ones who are the real danger are the self-contained types like you, impervious to the psychological pressures of high-rise life. Professionally detached. Thriving. Like an advanced species in the neutral atmosphere.

Laing: I’m sorry you think that.

Symbolism takes over somewhat as the film nears its end. Royal is God at his last dinner party, while the screams of childbirth in a nearby room behind it all are ignored. The table is sumptuously set, yet they are eating Royal’s wife’s horse.

Suddenly, God is dead, incipit Zarathustra. Wilder shoots and kills Royal. This is one of those incredibly violent films with only one gunshot – one less than Performance, an equally psychologically violent film, and which features two infamous gunshots. Laing buries Royal underwater, and the swimming pool becomes the center of the women’s reconstruction attempts, like nymphs or washer-women at the river.

Laing represents some sort of future for the ravaged, death-strewn block. One of the characters notes that, “Helen was right. It was a huge children’s party that had got out of hand.” Laing speaks of himself in the third person and vows to “throw his own party.” Perhaps this is what the future has in store for the West, at least in the short term, which may be the only option: a huge children’s party which gets out of hand. Perhaps it is that already.

Finally, there is one point of interest concerning a hypothetical social breakdown. It would be interesting, if one could look into proceedings like a little boy with an ant farm, to see an almost certain reversal of the current cultural status of the two broad, opposing political factions. Whereas the New Left have won the peace, I fear they would lose a civil war. Who do you think would be better equipped to forage for food, and even plan ahead, once the situation became obvious? People with clear and organized minds are more likely to be far Right of center rather than the screaming, emotionally flatulent hordes of SJWs. After the collapse, when the street gangs start killing for fun, or when they decide to start taking slaves, or when it just becomes one big video game for them, it will be the Left’s cronies they are going to catch.

High-Rise is an art film on one level, but on another floor, as it were, it is a horror film for those grown-ups who are alive to the fact that it may be just a few hours from becoming real.