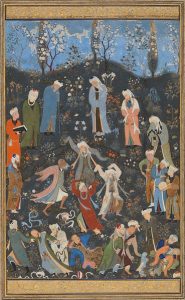 Recently, Counter-Currents posted the transcript of an important interview with Dr. Johnson entitled “Conversation with a Philosopher: Greg Johnson Interviewed About the New Right [2].” As always, it is a pleasure to read Johnson’s incisive insights. Already, his exact and thorough metapolitical analyses provide fundamental building blocks of the New Right. In the case of this interview, one – somewhat marginal – note should be allowed: a note regarding “Islam.”

While it is undoubtedly true that what many Westerners have experienced as “Islam” is negative (sectarian violence, as well as alienating behavior and aggressive expansion in the Western homelands), it should be emphatically stated that these experiences are entirely due to the “reverse colonization” policies of the globalist hostile elite. The problems caused by the entirely artificial – globalist-enforced – presence of alien Muslim populations cannot be reduced to the true qualities of “Islam” as such. Of course, deep concern about real-life problems is entirely justified, but their true cause should be seen for what it is: the hostile elite’s immoral and unjustifiable ethnic replacement program.

With the deliberate insertion of a millions-strong alien populace, many Western nationalists and patriots are starting to lose sight of this true cause; they are starting to confuse it with its disastrous effects. This serves the hostile elite very well: The bloated “islamophobic” discourse distracts attention from the real enemy of the Western nations: the globalist hostile elite. The fact of the matter is that True Islam is neither an inherently political religion nor a memetic virus: it is simply one of the world’s great religious Traditions. The fact that the carrier populations of Islam are now used as “bio-evolutionary” weapons in the globalist deconstruction of the West does not alter this. The Islamic Tradition may have decayed and withered under the impact of modernity, but that is true of all of the great religious Traditions. The primitive level at which it is practiced by many of its immigrant adherents in the West, and the atavist existential realities that it inflicts on indigenous populations – mostly on its vulnerable parts – should never be confused with the core of True Islam. In the same way, postmodern pseudo-Christianity of the (hyper-altruistic, self-destructive, open-border) Boomer variety should not be confused with True Christianity.

When Johnson states that “the desire of people to become Muslim would disappear if we had healthier white identities and societies,” he implicitly recognizes the intrinsic value of Islam: its value as a bio-evolutionary strategy and as a psychological-spiritual self-defense mechanism. He recognizes the disastrous state of mental and spiritual health in the West. The fact is that, compared to postmodern pseudo-Christianity and materialist secularism, Islam is relatively superior in terms of current viability: by holding on to an unshakable transcendental reference point, Islam provides a strong existential framework in all spheres of life. This relative superiority derives not from the strength of Islam (all authentic Traditions are potentially equally strong), but from the weakness of Western Christianity, which is currently abolishing itself. This is well illustrated by the apathetic public response to the destruction of one of Western Christianity’s most sacred shrines: Notre Dame – this non-response truly constitutes a “sign of the times.”

The fact that, throughout the last century, many significant Western thinkers have converted to Islam merely proves that any authentic House of Being – privately or collectively – requires a religious and spiritual roof. The dramatic collapse of Notre Dame’s roof illustrates the point: There can be no House of God without God, and there can be no House of Being without a spiritual shield for any Being-in-the-World. There is nothing inauthentic in seeking refuge in a standing house after running from a collapsing house. That said, it is true that no “true Westerner” would give up his own Tradition: the true Westerner will reincorporate and relive it his new House. This is relatively easy in True Islam, because True Islam has already incorporated and relived Judaism, Zoroastrianism, and Christianity; in its perfect manifestations, it accepts and fulfills all of them. This may not be apparent to those who see only the primitive folk religion of the often unscrupulous and greedy Muslim colonizers that the globalist hostile elite has brought into the West. The entire Islamic Question would automatically disappear once the Ethnic Question is solved: the (preferably controlled, gradual, and flexible) reversal of mass immigration and ethnic replacement would solve both. Johnson’s White Nationalist Manifesto [3]already offers a purpose-designed blueprint, spelled out in precise and concise words.

All those who doubt that any True Islam still exists, or has ever existed, may benefit from a more comprehensive study of its so-called “less orthodox” practitioners. The voice of True Islam has been smothered by decades of extremist rhetoric and media distortion; rhetoric and distortion that only serve the Western globalist hostile elite and its brain-dead lackeys in the deserts of Arabia. Those who wish to discover the voice of True Islam may start by listening to one of its most eloquent contemporary representatives: the Persian scholar and publicist Hosseyn Moheyddin Qomshe’i, better known as Elahi Qomshe’i. Many of his writings and lectures in English are freely available online. They may opt to start with his “Religion of Love [4]” presentation: it has multiple layers of meaning, but even its most shallow surface layer states his case very adequately. It should be well understood that no True Muslim will hold his religion to be other than relatively superior, i.e. in the entirely private sphere – for himself alone. Qomshe’i has gone to great lengths to explain this point.

Thus, there is no need for anybody to convert to Islam: religious and spiritual perfection can be reached through authentic Tradition. Rather, Westerners may wish to rediscover their own Christian roots. It should be noted that the entire concept of “conversion” – as in arbitrarily changing into another set of religious clothes – is highly problematic. The truth is that one can only become according to the outcome of his own unique nature-nurture equation. At the collective level, the nature-nurture equation has produced many outcomes: religions, cultures, races, and nations. Those that are committed to the defense of the Western nations – currently on a clearly self-destructive trajectory – are well advised to see True Islam for what it really is. They should not be distracted by the “islamophobic” maneuvers of their real enemy: the globalist hostile elite.

The issues of religious and spiritual health aside, there is also the more imminent issue of (meta)political strategy. The chief strategists of the New Right would be well served by a new look at the Islamic Question. They will discover that the alternative strategy position vis-à-vis Islam may yield unexpected perspectives – and (temporary, pragmatic) allies. They will also learn that the alternative strategy concept has deep historical roots in the European Right. Throughout many years of facile islamophobe populism – mostly a smokescreen for featherweight “civic nationalism” – this alternative strategy concept has been stubbornly upheld by a veteran spokesman for Western indigenous rights: Kerry Bolton. Many of Bolton’s writings on the topic are freely available online. Understanding Bolton’s point will deprive the globalist hostile elite of one its most valuable assets: the distraction posed by the Islamic Question. Such understanding will help the New Right to focus on its key asset – ethnonationalist self-defense – and to focus on its true enemy: the globalist hostile elite.