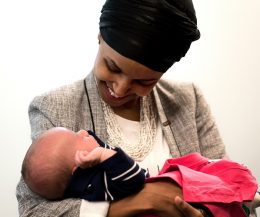 First, I would like to give you a triple thank you.

Thank you for your Twitter truth bombs regarding the “’progressive’ Democrat Congresswomen” who should fix the broken governments of their native countries before having a say in how our government should be run. “You can’t leave fast enough [2]” – yes, well put. This kind of America First patriotism is exactly what our nation needs to defend itself against powerful individuals who truly do hate America and its people.

I understand that people on the Right criticize you a lot. Any president of any free society is going to get that. As you know, it’s a sign of a healthy society when people can criticize their leaders without fear of repercussions. But one thing for which so many of us on the Right appreciate you is how you have introduced language into our public discourse that represents how we feel. Prior to you, such language was all but forbidden in mainstream America. Many of us didn’t even know we felt so protective of America and its people until you came along. Many of us felt we didn’t have any representation at all in government until you came along. So, thank you for that as well.

Secondly, I would like to bring up something you tweeted recently [3]:

If Democrats want to unite around the foul language & racist hatred spewed from the mouths and actions of these very unpopular & unrepresentative Congresswomen, it will be interesting to see how it plays out.

As usual, you are on the cutting edge of the Right among our elected leaders. Yes, the radical Left, as represented by these loathsome Congresswomen you mention, is indeed racist. It’s about time someone on the Right calls them out for it. But racist against whom?

Recently, when Rashida Tlaib’s office was asked if the Representative supported an event which promised to charge white people double the entry price, a staff member justified the practice [6] by saying that “minorities should be lifted up in the face of white privilege” and that “it’s not racist if you aren’t a protected minority group.”

There’s more, of course. This kind of offensive language has been a necessary part of the Left for years. And for years, the mainstream Right has been ignoring it or playing along.

You are the first person on the Right not to do that.

This gives me hope that you understand the Left’s true agenda: racism against white people. This is the glue which holds their coalition together. This is what constitutes much of their identity. It’s not enough to be non-white. They must be anti-white.

They hate you because you are white and because you understand this. You have the audacity not just to oppose their racism, but also to see their agenda for the sham it really is. They claim to be against racism while being openly racist themselves. They wish to implement a non-white takeover of the United States, all in the name of such rosy concepts as “diversity” and “tolerance.” This is why they promote unending immigration. This is why they wish to abolish our borders. This is why the wish to abolish you, Mr. President. By standing up for what’s right, you are standing up against their dishonest acquisition of power and their ultimate goal of oppressing and exploiting white people.

Such people are without a shred of honor, and you are giving them the respect they deserve, good and hard.

Why does the mainstream Republican establishment condemn [7] people on the Right when they chant “Send her back!” (referring to Representative Omar) at one of your rallies, while no one on the Left condemns Omar for claiming that America will not be a country of white people? How much longer are we going to allow this double standard to work in our disfavor?

You yourself said that Representative Omar and other deceitful ingrates like her could not leave this country fast enough. Judging from your supporters, this is a popular position. It’s popular because it fights fire with fire. As you have discovered, there is not a single tack the Left can use against the Right that the Right can’t also use against the Left. This has been part of your winning strategy so far.

Let’s stick to our guns and keep it that way.

Spencer J. Quinn is a frequent contributor to Counter-Currents and the author of the novel White Like You [8].