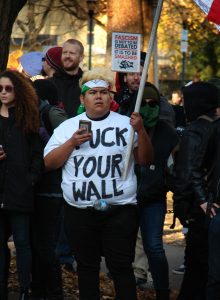 Antifa terrorism is not a Right-wing fantasy. It’s all too real after last week. A lone anarchist attacked an Immigration and Customs Enforcement (ICE) facility in Tacoma, Washington. The armed anarchist launched explosives at ICE vehicles before he was gunned down by security. The only fatality was the terrorist himself.

The attack was an escalation of antifa’s tactics in America. In the US, most antifa violence only occurs at public demonstrations and involves physical assaults. They rarely engage in the home invasions and car torchings that their comrades in Europe routinely carry out. They have also kept their violence – with some exceptions – limited to private citizens they consider fascists. American antifa have not really attacked government facilities or workers before.

The new attack should not be surprising. Antifa violence has been ignored or even justified ever since the day Donald Trump took office. The media continues to melt down over ordinary immigration detention facilities and Trump’s alleged fascist tendencies. The hysteria has already inspired acts of violence, and the derangement only gets worse. Antifa attracts plenty of mentally ill people who need little encouragement to rampage, and they know journalists and politicians defend their assaults and doxing. They see how ICE is compared to the SS. They know they can test their luck with terrorism and be greeted by silence or support.

Van Spronsen will not be an outlier. We are going to see more attacks like his, and it won’t just be ICE facilities that will be targeted. We could see cars belonging to Right-wingers torched, people beaten outside their homes, and even assassination attempts. Antifa is emboldened and unafraid of serious state retaliation. They know white liberals fantasize about “punching Nazis” and blowing up ICE facilities. The anarchists make that fantasy a reality for their sympathizers. This support base can be relied on to look the other way while the state does nothing.

Antifa is the greatest domestic terror threat in America.

Even though Right-wing terrorism is now considered the greatest threat in America, the violence associated with it is rare, revolting to 99.9 percent of Americans, and condemned by nearly all White Nationalists. Indeed, such violence resembles mass shootings more than traditional terrorism, which has definable goals and a base of support. It’s usually committed by mentally ill lone wolves without the support of any organization or community. It’s an eruption of depravity that ends in nothing but meaningless loss of life.

By contrast, jihadis are supported by numerous groups and a significant part of the Muslim population. Similarly, antifa has the support of numerous groups and a significant part of the American population. Many prominent antifa figures defended Van Spronsen’s terror attack. The anarchist organization CrimethInc., which is behind the popular antifa website It’s Going Down, released a statement [2] which read in part, “We understand why Willem Van Spronsen decided to give his life to interrupt the violence that is perpetrated against undocumented people in the United States every day.” They didn’t encourage others to follow suit, but they did say that more people should have met fascism with violence in the 1930s. (Even though many people actually did.) The statement continued:

Let no one say it is “violent” to attack the infrastructure of ICE and the mercenaries who maintain it. The real violence is the complicity of the Good Americans who do nothing as their neighbors are disappeared, just like those Good Germans who choose to ignore what was being done to their neighbors in the 1930s.

It then praised Van Spronsen:

Willem Van Spronsen chose to think for himself. He took personal responsibility and did what he could to put an end to what he recognized as injustice. He did not use the Nuremburg [sic] defense to excuse his actions the way that every police officer and prison guard does. In those regards, what he did was heroic.

The article also included an honorary icon of Van Spronsen and his rambling, incoherent manifesto.

Columnist and Black Lives Matter activist Shaun King declared Van Spronsen a modern-day John Brown [3]. “Willem Van Spronsen just became the first martyr attempting to liberate imprisoned refugees from a for-profit detention center in Tacoma, Washington,” he declared in a tweet that has since been deleted. “His hero was John Brown – the white abolitionist who led the raid on Harpers Ferry in 1859. This is what our country has come to.”

King praised the manifesto as a “beautiful, painful, devastating letter,” and insisted the terrorist wasn’t crazy – “inaction is.” The columnist all but endorsed terrorism against ICE facilities:

His actions will be called terrorism and people will call him crazy, but neither are true. His mind was very clear. He is now “arm in arm with John Brown.” These camps must be shut down.

Teen Vogue labor columnist (yes, that exists) Kim Kelly also defended [4] Van Spronsen’s “act of righteous sabotage,” and compared him to Second World War partisans. “As Van Spronsen and the many other heroic comrades before him have made clear, there are many ways to fight back against a violent fascist regime,” she tweeted. “Perhaps it’s time for more of us to put our thinking caps on.”

Prior to the attack, Van Spronsen’s group, the Puget Sound John Brown Gun Club, received glowing media coverage. CNN aired a fawning segment [5] on the group in May. The CNN host, W. Kamau Bell, said that they were the “good guys,” and wondered why more white people didn’t join them. He tweeted to his many followers that they should do “what they can to support” the Gun Club. Besides the attack, the John Brown Gun Club has stalked, doxed, and intimidated several Right-wingers. CNN says this is noble and that more white people should do it. The Gun Club commemorated [6] Van Spronsen’s death and hoped he would rest in power.

Antifa as a general movement has received glowing coverage since Charlottesville. Even Republican lawmakers [7] defended their violence against dissidents. There were more apologists [8] for their violence just last month, when the Portland black bloc assaulted an Asian reporter; they claimed that the journalist deserved it for critically covering them.

These comments and coverage would be unthinkable in the wake of “far-Right” terrorism. Right-wing terror apologists would receive instant bans, loss of employment, a knock on the door from the FBI, and universal condemnation. No such thing has occurred for antifa. Only the conservative media has covered the above comments – and Kim Kelly is still Teen Vogue’s labor columnist. The mainstream media and their liberal base don’t care that Left-wing extremists now support terrorism. No; they agree that ICE runs concentration camps and that the agency needs to be abolished. The mainstream media reported sympathetically [9] on the attack in its limited coverage, evincing the larger sympathy white liberals have for antifa.

No one from antifa condemned the terrorism. No mainstream media outlet voiced concern that the act will inspire copycat violence. No lawmaker called for hearings about domestic Left-wing terrorism. Only the Right cares about it. Mainstream journalists care far more about the mean tweets of Right-wing trolls.

Antifa and white liberals may seem to be opposing factions: the black bloc says it hates capitalism, laws, and order – all things which benefit white liberals. However, antifa does not target capitalism or institutions liberals value; they only go after white liberals’ enemies. ICE now stands in those ranks. Even though it is a government institution, liberals feel it is a rogue agency undeserving of the respect they give to other parts of the state. It would be a major news story if antifa attacked a State Department facility; liberals would demand a federal crackdown. ICE, however, does not enjoy that benefit, because it actually defends America and its people. If it is justifiable to attack ICE, just imagine the lack of concern for Right-wingers who get firebombed.

It can never be repeated too often that antifa are the establishment’s attack dogs. These self-described “anarchists” are coddled because they do the liberals’ dirty work. The liberal elites want Dissident Right events banned and ICE officers harassed. Antifa is more than happy to oblige. Antifa violence does not advance anarchism; it advances elite interests. Antifa is a tolerable presence to the powers-that-be. So long as their targets are the same as those hated by the center-Left, they can get away with murder – literally.

Many on the Right like the idea of challenging antifa on the streets. That hasn’t worked out well over the past two years. Sure, there were some Proud Boys who knocked some antifa out, and the Leftists (temporarily) fled from the Battle of Berkeley, but that didn’t really help the cause. The Proud Boys were indeed effective fighters against antifa [10], but the group is in shambles due to those confrontations. Unlike antifa, the Proud Boys lack the financial resources to defend themselves in court, as well as the media and community support they need in the public eye. A few pro-Trump outlets praised them and shared their videos, but that didn’t result in goodwill or action when the Proud Boys needed it most.

It is undoubtedly true that the negative results would be far worse for identitarian fight crews. The little conservative media support they get now would disappear, and the Department of Justice would prioritize their prosecution. A better use of resources and energy is to work to expose antifa members in the same way that they expose Right-wingers. These people wear masks for a reason. Naming and shaming them adds pressure to antifa associations, and may convince some Leftists to cut their involvement. Antifa are paranoid about protecting their identities. It’s a vulnerability savvy Right-wingers could exploit to deflate the movement. Identifying antifa will also help ensure Left-wing assailants do time for their crimes.

While this is one idea for identitarians to focus on, the real hope is for the state to bring the hammer down on antifa. If the group ramps up attacks on government facilities, you can expect the Trump administration to do something about it. While journalists won’t care, the feds will. Their attacks might be enough to get the group classified as a domestic terror group and for federal agencies to dedicate resources to their suppression. It would be a serious blow to their movement if a dozen black bloc members were hit with unimpeachable federal charges.

Antifa terrorism may also radicalize Middle America. If they see politicians being attacked and government buildings torched, they will not think moderation is the answer. Middle Americans will demand a strong state response and view Leftists as their mortal enemies, not as fellow countrymen. Left-wing violence polarizes the nation and chips away at the center’s façade of civility. And the “Nazi” slur will lose its power if cops, soldiers, federal employees, and Trump voters are all called that and in turn deemed worthy of assault. If Middle America feels threatened, they certainly won’t turn to Mitt Romney for salvation.

Antifa terrorism is a danger to the country and our movement. In the near future, we will see American Leftists emulate their European comrades by undertaking more aggressive actions. German antifa [11] plans to hunt down and assault known Right-wingers next week. We could very well see something like that in America. This escalation will make life more difficult for our movement, but also backfire for antifa.

As Van Spronsen learned, the American state will not tolerate violent attacks against it. The media coddling of antifa will in fact encourage them to be more reckless and stupid – and eventually, it will come back to haunt them.