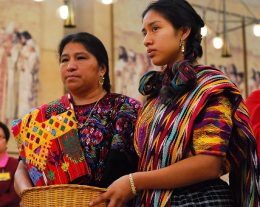 “Catholic migrants from Central America now have more in common with our Puritan forebears than do most Europeans.”

So argues Matthew Schmitz, a Catholic writer who supports Yoram Hazony’s “national conservatism.” He claims [2] that a multi-racial nationalism is possible so long as it’s guided by Judeo-Christian faith. The argument sounds little different from Conservative Inc. nonsense, and proves that national conservatism does not represent actual nationalism.

Schmitz tries to differentiate the nationalism for which he and Hazony advocate from creedal and racial nationalism. According to the Catholic writer, creedal nationalism “defines America in terms of a common creed: all men are created equal and are endowed by their creator with rights to life, liberty, and the pursuit of happiness.” Hazony’s nationalism is different because it emphasizes America’s Christian heritage – but there’s a twist. “In order to be an American one need not participate in that heritage, but one must respect it and be ready to defend it,” Schmitz writes. “Hazony’s view might be summarised as a multi-racial, ecumenical, and philo-Semitic Christian nationalism.”

I’m not sure our deist Founders would have declared philo-Semitic Christianity to be our unifying glue, but Zionists and Catholic integralists surely know better than us. Schmitz does not rely on the Founders to make this argument; he uses Martin Luther King! “In the 1960s, America belatedly chose its Christian identity – what Martin Luther King called ‘the sacred heritage of our nation” – over white supremacy.’” It’s strange that “anti-liberal” conservatives who loudly deride the 1960s [3] want America’s national identity to originate from the liberal crusades of the 1960s.

Indeed, the National Conservatism Conference [4] sought to more widely disseminate this “multi-racial, ecumenical, and philo-Semitic Christian nationalism,” but journalists still ruled it a racist event. That was largely due to comments made by University of Pennsylvania Law Professor Amy Wax. Wax did not shy away from addressing race in her opposition to mass immigration. Schmitz joined the chorus of shrieking journalists in decrying her comments as White Nationalism. He wrote, “Wax would base immigration policy on the notion of ‘cultural distance’: First World countries, whose cultures are supposedly nearest that of the United States, would be given priority.”

Schmitz says this is wrong because racial nationalism has no viability in America, and our nation’s core is philo-Semitic Christians, not white people. Schmitz believes a real “culture distance” immigration policy would favor devout Guatemalans over secular Swedes. This is when he claims Central Americans are just like the Puritans:

[Central Americans’] Church still proclaims the bodily resurrection of Christ, still believes in original sin and predestination, still opposes the evil of contraception. These are things the Puritans professed but many Protestant bodies, and many residents of formerly Protestant states – including Wax’s favoured ‘First World’ countries – no longer believe. Central Americans should be favoured over Europeans under any immigration policy based on cultural distance.

After that ridiculous assertion, Schmitz finishes off his column with his opinion on America’s actual divide:

The greatest cultural distance is not between natives and migrants but between a religious, patriotic, multi-racial working class and a secular, progressive, and largely white elite. Our country’s opinion-makers hate faith, revile patriotism and contemn family. People loyal to what is most noble in the American heritage have less in common with them than with almost any migrant.

The column is obviously wrong on many fronts. America is hardly united by religion, and “trad,” multiracial Judeo-Christianity was never a thing. There is a divide between elite whites and all other whites, but lower-class blacks and Hispanics do not stand on the same side as working-class whites. The elites favor non-whites of any class over working-class whites, and use minorities to advance their interests. Race has, is, and will always be America’s great divide. Catholic Guatemalans have nothing in common with the Anglo-Puritan settlers and their descendants, and America should still favor secular Europeans over devout Africans.

This is why nationalism must address race. Ignoring it leads to this kind of silliness.

America’s elite liberals deserve no defense, but it is tremendously dumb to assert the shared connection between Middle Americans and Mayan-speaking Central Americans. They are both Christians, but their faiths are not the same. In contrast to conservative delusions, the faith practiced by lower-class Hispanics – the people actually coming to America – is heavily influenced [5] by native practices and radical politics. Think tribal dances and mariachi masses rather than the austere, pre-Vatican II devotions. Evangelicalism is also popular among Hispanics, undermining the idea that the new arrivals are all good Catholics.

Evangelicalism’s popularity among Hispanics might seem to present a bridge between the new arrivals and white heartlanders, but this is true only on the surface. Hispanic evangelicals are more conservative than their Catholic co-ethnics on social issues, yet ethnic interests trump social conservatism [6]. Latino evangelical leaders are more focused on increasing immigration than gay marriage. Hispanic Christianity expresses racial identity and fights for Hispanic group interests. It’s not a means for assimilation.

The social conservatism of Hispanics is also grossly overstated. Most Hispanics support abortion and gay marriage, and they still vote solidly Democrat. Much of this can also be said of black Christians. They may hold some conservative views, but it doesn’t impact their voting patterns, nor does it motivate them to link arms with working-class whites against the tofu-eating globalists. Their faith affirms their racial identity, and black pastors are some of the worst racial activists in America. Both Jesse Jackson and Al Sharpton are ministers, for example. Black churches reinforce the idea that their congregants are different from whites.

Race is fundamentally important to non-whites, as seen by the overwhelming majorities of blacks, Asians, and Hispanics who say their racial identity is very important [7]. And if Christianity was a unifying bond for the working class across racial divides, you’d think most churches would be diverse. In fact, most congregations in America remain voluntarily segregated [8] by race. People prefer to worship with those who look like themselves.

The most ridiculous point in the column is the assertion that Central American Catholics are just like the Puritans. That might have been true if the Puritans had come to America to experience the Pequot’s welfare system, take jobs from their working class, and had had a notoriously corrupt political culture. Rather, the Puritans built high-trust, homogeneous societies that insisted on strict rules and social norms. They were industrious and created civilization out of the wilderness. Central American Catholics hail from notoriously corrupt societies with low-trust [9] and even lower ethics. The ones who come here may be hard workers, but they lack the capability for higher civilization or forging a nation. The Puritan society was built on an English foundation and is inseparable from that heritage. There was far more to the Puritans than opposition to contraception.

Agnostic Swedes may not oppose contraception, nor be tormented by sin, like the Puritans of old. That still doesn’t make them any more distant from the colonial stock than modern-day Mayans. Whatever the faults of contemporary Swedes, they are still European and resemble the Founders genetically and culturally. The Founders would have recognized this. The first naturalization act did not stipulate that citizens must believe in original sin and predestination; it said they had to be free white persons of good character. Race has always informed our national character, and American icons as prominent as Thomas Jefferson believed that America could never work as a multiracial society. Jefferson himself would not be allowed in Schmitz’s fantasy America because of his deism and racialism.

National conservatives latch onto religion to avoid the racial reality. They imagine America can be united by a vague Christianity that worships Jews and magically revives Puritan religiosity. How conservative intellectuals will convince secular Americans to attend church again is left out of the discussion. It’s also not clear how the supposedly multi-racial working class will come together against secular elites. The Religious Right has always been overwhelmingly white, in spite of its strenuous efforts to recruit non-white Christian conservatives. It’s doubtful that Catholic pundits will do a better job than megachurch pastors in forging a diverse Religious Right coalition.

National conservatives seem smart enough to know that they can’t accomplish this. They revel in delusion because they are afraid of race. It’s better to blather on about white Latin mass attendees and Hispanic Pentecostalists being strongly connected.

Schmitz’s article encapsulates conservative delusions about Third World Christianity and how anti-elite bias becomes anti-white racism. Schmitz, like many conservative Christians, sees Third Worlders as the great hope for the West: They will restore traditional practice, reevangelize the West, and bring down the godless white elites. In reality, Third World Christianity coming into the West will be more like Camp of the Saints than a new crusade. But to tout their anti-racist credentials, Schmitz and others will claim that they’d rather have based Nigerians than atheist Danes.

At least he does not go as far as Harvard Law Professor and Catholic integralist Adrian Vermeuele, who argued in a recent article [10] that America’s immigration policy should exclude whites in favor of non-white Catholics so that we can turn North America into the Empire of Our Lady of Guadalupe. To his credit, Schmitz believes America should still exist and not be turned into the launch pad for papist global domination.

America’s white elites are terrible, and their power should be challenged. But their problem is not due to latent Protestantism or some inherently tainted Northern European traits. America’s elite culture is no longer defined by WASPs; it’s ruled by the people who national conservatives fawn over. This is another area that the supposed nationalists won’t go near for obvious reasons. It’s far easier to bash Northern Europeans and lament our “WASP” elite than to mention Jewish influence.

American nationalism must address race and seek to defend white interests. Whites founded America, and the nation will not survive if we are no longer the majority. One cannot revive our nation with people wholly alien to our colonial stock, regardless of whether they believe in original sin. Only whites can preserve America.