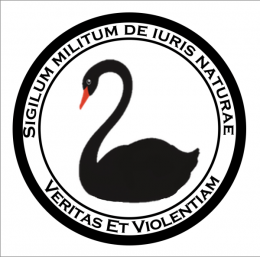 The logo of the Propertarian Institute.

Anyone involved in Dissident Rightist politics has probably heard of Propertarianism [3], which purports to be a system of law that will ensure a society immune to the various pathologies of modernity by redefining property to include those intangibles which are earned, built, and protected (homesteaded in the Lockean sense), and thus protecting such property – especially property common to a community of people. Its founder and chief proponent, Curt Doolittle, has triumphantly proclaimed that Propertarianism completes the Enlightenment and would purify Western thought from adverse Semitic influences.

Doolittle runs a Facebook page [4] where he quite openly discusses and workshops Propertarian tenets – in a sense, you can see the body of law and philosophy being built before your very eyes as Doolittle goes back and forth with his followers. It’s a strong approach to building a philosophical system, second only to peripatetics as practiced by Aristotle – walking around the Lyceum with his students while discussing philosophy. The limitations of the iInternet prevent us from engaging in online peripatetics, so our philosophy will necessarily be lacking insofar as we develop it in online discourse.

Before we jump into a discussion of Propertarian thought itself, however, it’s necessary to address several issues people have taken with the way it is presented, the ideas ancillary to it, and Doolittle’s way of doing things.

Several people, chief among them Jason Köhne – or as he is also known, No White Guilt [5] – have spoken against what they consider Curt Doolittle’s advocacy of violence, or fedposting. I had the good fortune to witness the moment Köhne turned on Propertarianism in a livestream [6] with John Mark – who is Propertarianism’s loudest advocate. As soon as John Mark mentioned that in a potential coming civil war, the Right would almost inevitably win, Köhne’s fed alarm started sounding. What followed were several weeks of Internet drama in which John Mark and Curt Doolittle were accused of being federal agents, and John Mark called the Alt Right and the broader Dissident Right “the losing Right,” putting them in the same category as cuckservatives. It wasn’t pretty. And tragically, it was a massive misunderstanding and an overreaction to an understandable Type I error.

Curt Doolittle often points out that the current US government – which is an enemy of the Right, of white people, and of everything good in the world – is ridiculously vulnerable to concentrated guerrilla actions against its infrastructure assets. It’s also worth pointing out that while this same US government can bring a world of hurt down on armed groups that oppose it, since 1945 it has consistently lost to armed groups that oppose it, especially those which are decentralized. The one counter-example that US armed forces cheerleaders will often point to are the 1991 and 2003 victories over Saddam Hussein’s Iraq. I’d like to put forth a theory that Saddam Hussein wasn’t actually defeated; the Ba’ath Party and its armed forces lived on in one form or another as the Fallujah Brigade, Al Qaeda in Iraq, ISIS, and other insurgent groups which have plagued American forces and their allies over the past sixteen years. They might even outlast the US government.

Needless to say, pointing out that the US is vulnerable to guerrilla warfare doesn’t constitute a call for guerrilla violence. Indeed, I’ve argued that the US is vulnerable to such tactics myself on this very site [7], and so have countless others in our movement and beyond. This is due to the simple fact that the US government is run by the corrupt and insane, defended by an officer corps that is full of women and cucks, and whose grunts are constantly harangued, humiliated, and punished for being white, male, and not cutting their own dicks off as sacrifices to Prog Moloch.

Another thing Curt will often say – though in vaguer terms – is that the future must be physically fought for. Again, this is something that not only I have mentioned before, but something which is generally agreed upon in the Dissident Right. Everyone who foresees the collapse of the American empire understands that bloody violence will rush in to fill the vacuum left by the dying hegemon. We know this from history, because violence always rushes in to fill such vacuums. What we in the Dissident Commentariat tend to disagree about is the nature of the coming conflict. Some assume it will be a race war; others believe it will manifest in the form of sectarian or local conflicts. My personal prediction is “pocket Bosnia” at the personal level. Western man, the atomized individualist, will have decades of repressed brutality gushing out of his hindbrain, but find himself without a folk, Männerbund, or even familial connection in order to help him wreak violence. It’ll be personal, disorganized, brutal, and probably swept aside by an organized and cohesive force which right-thinking white men may or may not scrounge up in time.

Regardless of what form it takes, securing the existence of our people and a future for white children will require organized violence. To that effect, I’ve written my own speculations on how to construct gangs and Männerbünde in order to effectuate this violence, when the time comes – here [8], here [9], and here [10]. What violence ought be engaged in can under no circumstances be illegal; only after the collapse of the US will it become necessary. We will have to and we will, but until the time comes when there is no law, we will at no point break the law.

So, like I said, it was a misunderstanding and a Type I error on Jason Köhne’s part. It’s not as bad to eject a well-meaning guy from the movement while erroneously believing him to be a federal agent than it is to accept a federal agent whom you erroneously believe is a well-meaning guy. Curt Doolittle is so deeply autistic that he cannot sugarcoat his observations about the fragility of the US government or the effectiveness of guerrilla warriors against the category of regimes to which the US government belongs, whereas John Mark’s speech patterns and statements are those of a salesman.

It may be harder to detect for American ears, but the paranoid little Balkaner at the heart of my being can see the giddy and commercial smile behind John Mark’s motorcycle helmet, and the sleazy life insurance salesman in me recognizes his sales tactics, from the use of simple language to the childlike enthusiasm. From an optics perspective, this could be a good or bad thing – a system of law and philosophy is not a life insurance policy (or is it? More on this later).

It is therefore no wonder that Jason Köhne’s alarm was tripped – ivory-tower autistes and traveling salesmen moonlighting as Daft Punk roadies are hardly the kind of people who can accurately and effectively spread an ideology. All it took was this little misunderstanding, and now Jason sees evidence of John Mark’s federal employment everywhere. The fact that John Mark didn’t get purged by YouTube in the latest Orwellian crackdown is seen as highly suspicious at the very least. And John Mark isn’t helping matters by calling Jason Köhne and other Dissident Rightists cowards for raising the alarm.

Personally, I doubt either Curt or John are feds. John’s a wee bit sleazy, but no sleazier than I was when I was selling life insurance. Curt, bless his little heart, is too smart and too autistically single-minded to work for the federal government. They’d have him out on his ass in an instant. Men like him spot a problem and cannot be deterred from solving it, regardless of whether the problem needs solving or is even solvable – which in the context of the federal bureaucracy means disrupting everyone’s comfy sinecures. There’s no real way to control them; they’re like bulldozers with a brick superglued to the gas pedal. The best that can be done is to steer the unstoppable bulldozer in a direction where it can do at least some good and less harm. I know this because my father was a man as intelligent and as single-minded as Curt who found himself running up against an impenetrable wall of bureaucracy, and had his career and life ruined as a result.

They could, of course, be acting – but then we’re in the business of ferreting out shadows. We find ourselves with insufficient information to proceed, and are forced to start doubting even each other. Am I a fed? Is Greg Johnson a fed? Are you a fed? Plot twist: Curt Doolittle is sincere, but everyone else is the Royal Canadian Mounted Police (shhh). Nobody expects the Canadian mounties.

The Cult of Curt Doolittle

A second issue that needs to be addressed before we dive into his philosophy are the accusations that Curt Doolittle’s followers exhibit cult-like behavior. We can easily dismiss this as having little or nothing to do with the philosophy by claiming that thinkers and content creators aren’t responsible for the behavior of their followers, but that’s not exactly true. Recall Aesop’s fable of the trumpeter [11]: He was captured by the enemy and then pleaded for his life by claiming that he had not killed a single man. He was nevertheless executed, given that his trumpeting incited other men to battle. If Propertarians are cultishly devoted to Curt Doolittle, there’s probably something about Doolittle that lends itself to attracting such men.

The answer, I believe, lies in Doolittle’s method of stress-testing Propertarianism by asserting something on his Facebook page and inviting his followers to discuss and, if possible, disprove it. He calls it king of the hill: He entices you to attack his position. The goal of the game is to put one over on Curt. In the process, Propertarian thought is developed. As I mentioned before, it’s very fun, and possibly the second-best teaching and philosophizing method in the world after Aristotelian peripatetics. In the process, casual players and entryists are boiled off, leaving behind the sharp and the devoted. The result is a bunch of people all trying to knock Curt off his perch within a closely defined framework where each victory, or even near-victory, grants the player higher status in the social circle. Naturally, only the most devoted would move into the inner circle of this informal status hierarchy, and their devotion would percolate outwards into the broader group of people (which is fairly clear of entryists and casuals, anyway). But I’ve just described a general group dynamic which could be said to work for any forum; even commentators here on Counter-Currents. What’s so different about online Propertarians?

In the end, it’s a question of personalities. What’s the kind of man who’d follow a stranger online and try to prove him wrong for the sake of online prestige, while in the framework of an as-yet incomplete philosophical and political movement? Not your average dude, but a neural outlier; someone whose activities look weird when seen from the outside, no matter what he does. In a sense, Curt is the only fount of knowledge when it comes to Propertarianism. If you’re interested, you gotta go to Curt. Looking in from the outside, it’s a bunch of guys listening to Curt and craving his approval. Seen from the inside, it’s a bunch of guys arguing amongst each other and with Curt.

Now that we’ve gotten the gossip and drama out of the way, next we’ll get into Propertarianism itself.