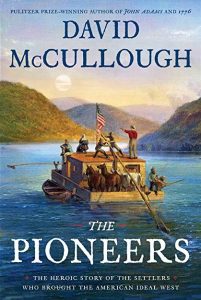 David McCullough
The Pioneers: The Heroic Story of the Settlers Who Brought the American Ideal West
New York: Simon & Schuster, 2019

David McCullough’s latest book tells the story of the pioneers who settled the Northwest Territory (Ohio, Indiana, Illinois, Wisconsin, Michigan, and most of Minnesota), mostly focusing on Ohio and spanning the signing of the Northwest Ordinance in 1787 up to 1853. His account of this lesser-known chapter in American history is both engaging and meticulously researched. It is a worthy homage to the American pioneer spirit, and highlights the absurdity of equating today’s immigrants with the pioneers who settled America.

The first permanent settlement in the Northwest Territory was Marietta, Ohio, which was founded on April 7, 1788. (The second was Gallipolis, which was founded in 1790 by Frenchmen who had fled France amid the Revolution.) The 48 men who first settled there included many who had fought in the Revolutionary War. They were led by Rufus Putnam, a General in the Revolutionary War and a co-founder of the Ohio Company of Associates, along with Manasseh Cutler, Benjamin Tupper, and Samuel Holden Parsons. The company was formed in 1786 in order to organize the Ohio settlement. Putnam was later appointed as the first Surveyor General of the United States.

Cutler and Putnam were the main architects of the settlement. Cutler was a Connecticut-born clergyman who had a leading role in drafting the Northwest Ordinance and later founded Ohio University (the first university chartered by an Act of Congress and the eighth-oldest public university in the United States). An avid astronomer, meteorologist, and naturalist, he was described by The American Naturalist as “a pioneer in a new country, not merely a pioneer in science, but a pioneer for truth and civilization in every form.” 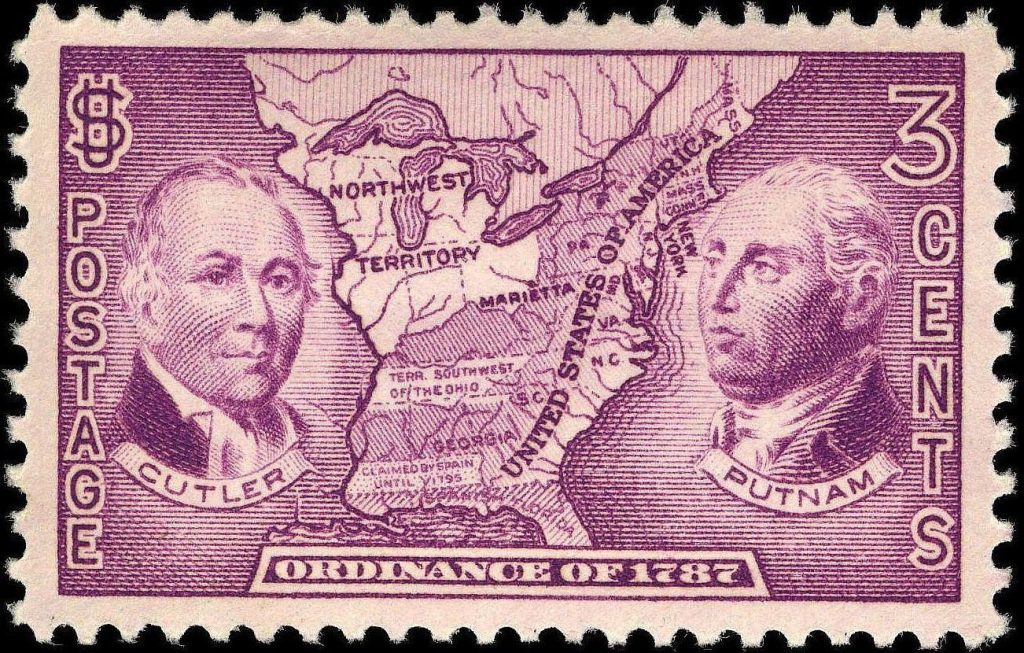 The scholar and the war hero: Cutler and Putnam on a 1937 stamp commemorating the 150th anniversary of the Northwest Ordinance

The first men to settle Ohio were vetted by Putnam and Cutler, and were chosen for their bravery and survival skills. George Washington said of them, “I know many of the settlers, personally, and there never were men better calculated to promote the welfare of such a community.” When the Marquis de Lafayette visited Marietta in 1825 toward the end of his tour of the United States, he remarked upon hearing the names of the first pioneers, “I knew them well. They were the bravest of the brave.”

The pioneers encountered many obstacles. Ohio was a wilderness filled with wolves, bears, rattlesnakes, and copperheads. Establishing settlements demanded a great deal of labor: building log cabins, roads, and so on. The winters were harsh, and in 1789 an early frost killed the corn they had grown. The food shortage caused them to suffer from starvation; that year was known as the “Starving Year.” The same year, there was a measles outbreak that killed a number of children. A smallpox outbreak followed. In 1805, there was a deadly epidemic of yellow fever, and in 1822, influenza. Diseases such as typhoid, scarlet fever, and dysentery were also present.

The natives were another obstacle. They were hardly peace-loving noble savages. McCullough mentions a number of acts of violence perpetrated by the Indians against white settlers. The most notable of these was the Big Bottom massacre. On January 2, 1791, Lenape and Wyandot Indians attacked a settlement north of Marietta, killing 14 settlers, including an entire family.

The gravest blow came on November 4, 1791 in a battle that has come to be known as St. Clair’s Defeat, or the Battle of a Thousand Slain. It was the bloodiest episode in the Northwest Indian War, with about 900 casualties on the American side. McCullough does not shy away from describing the Indians’ savagery. The Indians scalped settlers while they were still alive and then threw them into campfires. The Lenape chief known as Captain Pipe made it his mission to kill white settlers until he was “weary with the work.” One unfortunate general had his heart cut into pieces that were distributed among various Indian tribes. The Indians also killed women and children and cut off women’s breasts.

The war came to an end with the Indians’ defeat at the Battle of Fallen Timbers in 1894 and the subsequent ratification of the Treaty of Greenville in 1795, which forced the Indians to cede southern and eastern Ohio.

The Pioneers has an almost novelistic feel, giving the reader a glimpse into the everyday lives of the pioneers and their progeny. One anecdote: Cutler’s adventurous son Jervis once got lost in the wilderness for eight days and survived on a deer, a turkey, and “a little half-starved opossum.”

Other figures mentioned include Aaron Burr, who used co-conspirator Harman Blennerhasset’s island on the Ohio River to store men and supplies; Johnny Appleseed; and John Quincy Adams, who presided over the founding of the Cincinnati Observatory – the oldest professional observatory in the United States.

Throughout the book, McCullough emphasizes the pioneers’ commitment to abolitionism and portrays them as high-minded egalitarians. This is not the full truth, as most white abolitionists at the time still would have held “racist” attitudes. They probably would have sympathized with Albert Schweitzer’s view: “With regard to the negroes, then, I have coined the formula: ‘I am your brother, it is true, but your elder brother.’” Many opposed slavery precisely because they believed that fewer slaves would flee to the North if slavery were abolished in the South.

Charles Dickens is one example of someone who fiercely opposed slavery (in his American Notes), yet was hardly an anti-racist, remarking in one letter on the “absurdity” of granting blacks the vote.[1] [3] Both he and fellow Englishman J. S. Buckingham noted the differences between the southern side of the Ohio River, where “the great bulk of laborers were negro slaves, whose air, dress, and general appearance, sufficiently manifested their indifference to everything but their own ease” (in the latter’s words), and the northern side. Dickens was impressed by Cincinnati, whose inhabitants he found “intelligent” and “courteous.”

There are a number of examples of racial consciousness among white Ohioans in the early nineteenth century. In 1804 and 1807, the Ohio legislature passed a series of laws designed to discourage blacks from migrating to Ohio. Blacks were required to post a $500 bond guaranteeing their good behavior. Another provision prohibited them from testifying against whites. When John Randolph proposed sending his 518 emancipated slaves to Ohio, one Ohio Congressman warned that “the banks of the Ohio . . . would be lined with men with muskets on their shoulders to keep off the emancipated slaves.”[2] [4] Schools and neighborhoods were segregated. When Oberlin embraced integration in 1835, it caused an uproar.

This issue aside, The Pioneers is worth reading. It is a refreshing departure from the demonization of white settlers that is common in academia. McCullough praises their heroism and bravery, as well as their achievements in the realm of education and culture.

It is impossible to take the “nation of immigrants” slogan seriously when one compares present-day non-white immigrants who leech off our resources to the white men and women who carved a nation out of the wilderness. America was built by pioneers, not immigrants.