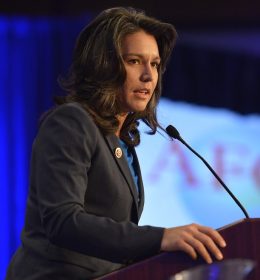 Rep. Tulsi Gabbard, the least horrifying among the current crop of Democratic candidates — but who won’t get the nomination.

Open borders is no longer a meme; it’s the official stance of most Democratic presidential candidates.

During last week’s debates, which were held over two nights, most Democratic candidates said they want illegal immigration decriminalized. Nearly every candidate thinks illegal immigrants deserve free healthcare. The only debate in this area was over who was the most favorable toward open borders of them all. The few Democrats who have previously demonstrated common sense on immigration have now capitulated.

The Democratic field is a clear and present danger to white America.

Former Housing and Urban Development Secretary Julian Castro took the lead [2] on immigration during the first night of the debate. Castro emphasized he wants to get rid of Section 1325 of the American legal code that makes illegal entry into the country a criminal offense. He believes this act should only be a civil offense.

Castro attacked former Texas Congressman Beto O’Rourke for not addressing Section 1325. O’Rourke demonstrated reluctance at the prospect of decriminalizing illegal immigration. “I just think it’s a mistake, I think it’s a mistake, Beto, and I think if you truly want to change the system, then we got to repeal that section,” Castro said. “If not, it might as well be the same policy.” O’Rourke insisted his plan would also be easy on illegal immigrants and touted a bill he proposed “that would ensure that we don’t criminalize those who are seeking asylum and refuge in this country.” Castro mocked this proposal as insufficient.

Castro clearly got the upper hand on O’Rourke, a white guy who constantly apologizes for being white [3]. At least two prominent candidates who shared the stage with Castro – Massachusetts Senator Elizabeth Warren and New Jersey Senator Cory Booker – agree that illegal immigration should be decriminalized. Even Minnesota Senator Amy Klobuchar, a supposed moderate, said she would consider decriminalization. “Immigrants, they do not diminish America,’’ Klobuchar declared. “They are America.”

Castro also called for a Marshall Plan for Central America, ignoring the fact that America already annually contributes millions of dollars in foreign aid to these countries.

There were many other cringe-inducing immigration moments from the first night. Senator Warren lamented that the economy doesn’t work for “Latinx” people. O’Rourke, Booker, and Castro spoke Spanish at random times. The entire stage expressed outrage over the viral photo of drowned migrants and blamed President Trump for their deaths.

Every Democrat insisted that it’s not “our values” to turn anyone away who wants to come to our border. O’Rourke tried to defend his position on immigration with a vow that the drowned father and daughter would not have been welcomed under his asylum policy. The problem is that the drowned pair were clear economic migrants, not legitimate asylum seekers. It is known that the father fled to America for financial reasons. (Then again, Democrats may soon consider poverty a valid claim for asylum.)

New York City Mayor Bill de Blasio argued that immigrants aren’t causing any problems for Middle Americans; it’s all the big corporations’ fault. While there is a point there, big corporations deliberately encourage mass immigration to drive down wages and disrupt white communities. Immigrants may not be the root cause, but they aren’t a non-issue, either.

The Republican Party likes to cloak itself in their language of religion. We should call out hypocrisy when we see it. For a party that associates itself with Christianity to say that it is okay to suggest that God would smile on the division of families at the hands of federal agents, that God would condone putting children in cages, has lost all claim to ever use religious language again.

According to Buttigieg, the only way to do away with family separation is to treat illegal immigration like a parking ticket.

The three candidates on stage who were once somewhat sensible [4] on immigration cucked out. Bernie Sanders once called open borders a Koch Brothers idea. Now it’s part of his platform. Bernie also called Trump a racist, and said diversity is what America is about. Kirsten Gillibrand once ran as an immigration hawk. Now she supports free healthcare for illegals.

Most disappointing of all was Andrew Yang. Yang also raised his hand for free healthcare and decriminalization. Just a few months ago, he captured the attention of the Dissident Right with his fresh proposals and acknowledgment of white America’s plight. He seemed different from the rest of the Democratic herd. On the debate stage, he only differentiated himself by his lack of a tie. He even insisted that Russia is our greatest geopolitical threat, a considerably dumber Resistance take than those of his fellow candidates who said it was China. In his closing address, Yang claimed he could win over disaffected Trump voters and conservatives. His performance shows that’s a lie. He’s about as appealing as Reddit.

Race hung over the debate. Most Democrats championed immigration with the implicit assumption that it would transform America’s demographics to the party’s advantage. Most candidates signaled their belief that diversity and immigrants make America great – and we need more of both. There was an underlying sentiment that Barack Obama, the first black President, failed to transform America enough with his deportation policies. One debate moderator, José Díaz-Balart, claimed [5] that Obama deported three million “Americans.” It’s not clear if Mr. Díaz-Balart misspoke. Nevertheless, the candidates probably would have agreed that those illegals were Americans, and none of them challenged his assertion.

The one dissent from racial orthodoxy came from the bumbling frontrunner, Joe Biden. The former Vice President defended his past opposition to busing, the practice that sent black kids to predominately white schools for the sake of racial justice. He did this in response to an attack from California Senator Kamala Harris. Harris began her attack by saying, “As the only black person on this stage, I would like to speak on the issue of race.” She criticized Biden for praising his work with segregationists and busing opposition. “You also worked with them to oppose busing, and you know, there was a little girl in California who was part of the second class to integrate her public schools,” she recounted in her dubious sob story. “And she was bused to school every day. And that little girl was me.”

To his credit, Biden didn’t capitulate to Harris, and insisted he did not oppose voluntary busing. Journalists declared Harris the clear winner of the exchange, and her campaign began selling [6] “That Little Girl Was Me” shirts right after the debate. In reality, busing was a total failure that was overwhelmingly opposed by the whites who had to endure it. When Biden last ran for President in 2008, he could have proudly pointed to his opposition to busing. Now, it’s a liability for him. We’re expected to believe that all government-sponsored racial experiments are good. It wouldn’t be surprising if Harris called for the return of busing in her platform. Senator Warren has said [7] it’s a good idea to bring it back.

Though many of these candidates have previously expressed support for reparations, only one candidate touted the idea during the debate: New Age author Marianne Williamson, who entertained the Internet with her plan to harness “love” against Donald Trump.

Besides immigration, Democrats evinced other signs of a far-Left turn. Pretty much every candidate said he wants to put America on the path to single-payer healthcare. The only difference between candidates on this issue is whether they want to do it immediately or gradually. Democrats, both men and women, competed to see who could be the most pro-abortion. It was quite jarring to see so many white men insist they were the ones who truly respect women. Most candidates likewise favored a Left-wing turn in economics, particularly Warren and Sanders. Only one Democrat, Colorado Governor John Hickenlooper, (ineptly) warned about the dangers of socialism.

The only area where some of the candidates showed a bit of sense was on foreign policy. As stated above, most Democrats named China rather than Russia as America’s greatest geopolitical foe. That’s more sensible than what the past three years of Russia hysteria has brought. Senator Gillibrand said her first foreign policy priority would be to reach out to Iran to calm tensions in the Middle East; a more reasonable suggestion than Trump’s current attitude toward the country.

The one who really stood out on foreign policy [8] was Hawaii Representative Tulsi Gabbard. Gabbard denounced the “chickenhawks” in the Trump administration, attacked Saudi Arabia, and flayed Ohio Representative Tim Ryan for his idiotic support for the forever war in Afghanistan. She was the one solid non-interventionist on stage, and won the Drudge Report poll for the first night of the debate. Unlike Yang, Gabbard demonstrates independence, and has fresh ideas when it comes to foreign policy.

The debates clarified where the Democratic Party stands. It supports open borders and wants to redistribute white wealth to non-whites, whether through free healthcare for illegals or reparations for blacks. Single-payer also fits this racial redistribution model. It should not be seen as a benefit for all Americans, but rather as just another way to take away white wealth. Being a white guy is a liability, as Biden and O’Rourke learned. No amount of contrition can compensate for that deficiency.

Democrats are the best argument for Trump to stay in office. Despite his many failures and disappointments, Trump does not want to redistribute white wealth or allow the whole world to come through our southern border. Indeed, Democratic extremism may very well be enough to keep Trump in office for another four years.

Some Democratic candidates are aware of this weakness and want to obscure their America Last agenda. Castro, the very guy who proposed decriminalizing illegal immigration, declared [9] the day after the debate, “Nobody has called for open borders. That’s just a Right-wing talking point.”

Self-awareness is not his strong suit.

After the first debates, Warren and Harris appear to be the strongest candidates from a Leftist perspective. They’re both women who can appeal to the establishment as well as the progressive grassroots. Both had the highest ratings in live polling. So did Biden, in spite of his poor performance. Democratic voters are apparently desperate enough for Obama’s return to overlook Joe’s flaws. Bernie looks far weaker now than he did in 2016. Yang is a disappointment who should no longer receive any Dissident Right support.

Only Gabbard (and maybe Willamson, for content purposes) should receive our praise. But Gabbard is definitely not going to win the nomination. It will be someone more anti-white and more acceptable to the globalist establishment.