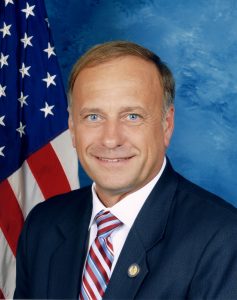 Republican Iowa Rep. Steve King is in serious trouble again. This time, it has nothing to do with race or immigration; it’s over sex and abortion. Like most of King’s comments, it revealed an uncomfortable truth, but it upheld a foolish position that the Right should avoid.

You may recall King as the Congressman who often makes BASED Boomer comments. He’s a staunch immigration opponent who regularly defends Western civilization and (unintentionally) expresses identitarian views. He has said that Western civilization can’t save itself by using other people’s babies; he has been consistent in noting the demographic change in Western countries; and he is one of the few Republicans who’s happy to meet with European nationalists.

Republicans ostracized King earlier this year after he said this to The New York Times [2]: “White nationalist, white supremacist, Western civilization — how did that language become offensive? Why did I sit in classes teaching me about the merits of our history and our civilization?” That one statement resulted in the Iowa congressman losing his committee assignments, disavowals from GOP leaders, and an official congressional condemnation of himself.

King has not apologized nor changed his views since his ostracism. Last week, he drew forth the indignation of the media and his party’s leaders once more. Speaking at an event in his home state, he explained [3] why he opposes rape and incest exceptions to abortion bans:

What if we went back through all the family trees and just pulled those people out that were products of rape and incest? Would there be any population of the world left if we did that? . . . Considering all the wars and all the rape and pillage that has taken place . . . I know I can’t certify that I was not a part of a product of that.

Those comments probably should not have been made by a politician, but they are true. However, the feelings of journalists and political leaders mattered more than the facts. Nearly every Democratic presidential candidate, and even high-ranking Republican Congresswoman Liz Cheney, the daughter of Dick, called for his resignation. “This is incredibly cruel & disrespectful to survivors. Steve King & his values, his rhetoric, & his disdain for decency is a far cry from the Iowa I know,” Democratic Iowa Rep. Abby Finkenauer said in a typical reaction. “He doesn’t represent who we are & he continues to be an embarrassment to our state & federal delegation.”

This is incredibly cruel & disrespectful to survivors. Steve King & his values, his rhetoric, & his disdain for decency is a far cry from the Iowa I know. He doesn’t represent who we are & he continues to be an embarrassment to our state & federal delegation #ia01 [4] https://t.co/nQ6L7ZKRRG [5]

Another typical reaction came from Democratic Minnesota Rep. Ilhan Omar: “Gross! This would explain why these weirdos are fixed on smearing me with claims of incest. Projecting their filth, unreal.” Strong evidence [7] alleges that Omar married her brother to commit immigration and tax fraud, but her arrogance leads her to believe that white conservatives are the real incestuous folks.

Gross! This would explain why these weirdos are fixed on smearing me with claims of incest. Projecting their filth, unreal. https://t.co/PTJpBYyUNV [8]

Once again, King refused to apologize and demanded an apology from the media for twisting his words. There is no chance he will receive an apology.

As stated above, King’s comments were true – even if they were bizarrely stated. It’s a near certainty that all people on Earth have ancestors who were the products of incest and rape. It’s an ugly fact, but it’s true. In earlier times, your ancestors probably procreated with a relative, and sexual violence often followed war and conquest. Vikings imparted their DNA throughout Europe through rape and abductions. The rape of the Sabine women was an integral part of Rome’s founding, and Romans were proud to say they were their descendants. The ancients, however, did not celebrate rape. Those same Romans also saw the rape of Lucretia as a grave injustice that warranted a revolution – but they accepted it as a dirty fact of life.

Feminists don’t even believe in feminist courting themselves. Over half of American women [10] admit to having rape fantasies. Most pulp romance novels play to this; think of the 50 Shades series, which, while not exactly a rape fantasy, features a dominant man overpowering a submissive woman. It’s a fascination that even Bernie Sanders noticed. “A woman enjoys intercourse with her man – as she fantasizes being raped by 3 men simultaneously,” Sanders wrote in 1972 [11]. There may be some evolutionary explanation for this fantasy; perhaps it is a biological reminder of primitive mating. Either way, its prevalence does not lead to the conclusion that the ancients only practiced affirmative consent [12].

Rape and incest are rightfully seen as deviant behavior today. That’s why society is appalled to hear a major figure claim that we all have rape and incest in our family trees. But it is undeniably true.

Critics claimed King’s statement supported rape and incest, despite the fact that this was obviously not his intent. Shrill feminists and Leftists need to believe King argued for rape and incest to reinforce their own biases. They believe the patriarchy has imposed a rape culture on America, and that old white men believe it’s okay to sexually assault women. America is a very dangerous country for women, as “respected” NGOs tell us. It’s easy to support this delusion if you think Republican lawmakers openly support rape.

The incest claim helps further anti-white stereotypes as well. Non-whites love to think that whites – particularly rural whites – are banging their sisters and cousins. “King admitted that whites are the real incesters!” However, non-whites are far more likely to engage in incest than whites. Consanguinity marriages are rare in the West [13], but very common throughout Africa and Asia. Calling whites “cousin fuckers” is pure projection.

Regardless of the truth of King’s comments, he shouldn’t have said it. First, it’s a strange hill for a politician to die on. Second, it’s for a cause that will alienate many middle Americans.

King is one of the most stalwart advocates of sensible immigration policies. He never capitulates on defending America’s interests against foreign intrusion. He’s also a strong critic of multiculturalism and affirmative action. He is wont to have frequent heated Boomer moments, but he is still solid on those core issues.

However, he pairs this solid ideology with abortion extremism. Most white Americans want some restrictions on abortion, but they don’t want it banned outright. The majority of them want abortion to be available in the cases of rape or incest. Alabama passed an abortion ban in May that satisfied King’s requirements, as it only allowed abortion if the mother’s life was at risk. Otherwise, all abortions would be illegal. Polls show only fourteen percent of Americans support such a law [14]. These laws and comments alienate large swaths of the electorate – all for a lobby that doesn’t defend its allies.

No pro-lifer came to King’s defense, even though his comments were in defense of their cause. One conservative writer said [15] that King’s “rhetorical stupidity hurts the pro-life movement.” That writer believed King defended the acts of rape and incest, and wished all pro-lifers would stick to respectable talking points.

The conservative movement also barely defended Alabama for passing a law that Conservative Inc. has championed for years. Many commentators wrung their hands that the prohibition set back the pro-life movement. It did alienate voters, but it did so following the logic of the pro-life movement’s proposals. The problem doesn’t lie with Alabama; it lies with the conservatives who insist on a blanket opposition to all abortions.

This author previously wrote [16] on how the pro-life stance has become a litmus test for Republicans. No Republican can run for President if he or she supports abortion. Donald Trump proved this when he reversed his long support for abortion when he ran in 2016. Pro-lifers attacked Trump [17] when he followed the logic of their arguments and said women who have abortions should be punished. “No pro-lifer would ever want to punish a woman who has chosen abortion. This is against the very nature of what we are about,” said March for Life President Jeanne Mancini.

Once again, pro-lifers showed they care more about their strange sense of respectability than defending their own. Abortion is murder, yet the women who requests the act are not held responsible. This is feminism, but even dumber.

The proper abortion stance for identitarians is not to have one. It’s not our fight.

Some on our side urge us to follow Steve King’s example and embrace the most radical pro-life position. Not only does this repulse white Americans who may sympathize with our cause, it doesn’t gain us allies. Just look at how King is isolated from the rest of his party, despite his long record of fighting against abortion. Just think of how the March for Life quickly disavowed the Covington Catholic kids over false accusations of racism. The pro-life movement is just as horrified by white identity as the rest of Conservative Inc.

There may come a time when pro-lifers overcome their horror and become our allies. But that time is not today. There is no reason for identitarians to be extremists on every issue. We want to present ourselves as reasonable, normal people. Our core position – that whites should act collectively to preserve ourselves – already puts us outside of the mainstream. We shouldn’t further our isolation by taking positions that have nothing to do with our cause.