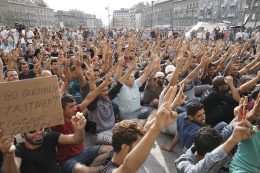 I had wanted to write a lengthy preface to explain my position and show that this is no wild-eyed dream; that even if my specific action, symbolic as it is, may seem far-fetched, the fact remains that we are inevitably heading for something of the sort. We need only glance at the awesome population figures predicted for the year 2000, i.e. twenty-eight years from now: seven billion people, only nine hundred million of whom will be white . . .

While the showboating autistic Nobel Prize nominee Greta Thunberg skims the Atlantic waves in the zero-emission Malizia II, heading towards the UN Climate Action Summit to raise awareness about the melting polar ice caps, rising sea levels, and crops withering on the vine, hundreds of millions from the Global South, always portrayed by an indulgent and sympathetic mainstream media as victims of rampant capitalism and global warming, avariciously eye our European homelands.

For as Houari Boumedienne, the Chairman of the Revolutionary Council of Algeria and the country’s second President – all blazing eyes, pointed face, and swept-back reddish hair – predicted in a television interview in 1974, a mere decade after his group had driven the French from the country: “No quantity of atomic bombs could stem the tide of billions of human beings who someday will leave the poor southern part of the world to erupt into the relatively accessible spaces of the rich northern hemisphere looking for survival.”

Current statistics on worldwide demographics prove his hypothesis was correct, with the world’s white population having plummeted to less than ten percent of the global total, according to a recent revision [3] to the projections originally made in a 2017 working paper for the UN’s Population Division Department of Economic and Social Affairs. Boumedienne supported his thesis in his book The Battle Against Underdevelopment (1974), which was in effect the text of his keynote speech to the United Nations, including declarations about “victories to be won against poverty and insecurity.”

And less than five decades later, in over two thousand towns and cities across the entire developed world, hundreds of thousands of well-intentioned but gullible schoolchildren are taking to the streets to protest environmental depredation and bio-diversity loss. We also have Extinction Rebellion, Our Revolution, This is Zero Hour, and Sunrise Movement activists, who take their lead from the Occupy movement, Gandhi’s satyagraha strategy, and Martin Luther King’s civil disobedience, attempting to close down airports and bring our capital’s tree-lined avenues and neatly-ordered squares to a standstill. But such activities are no longer solely the preserve of street activists. We also have corporations such as We Don’t Have Time, Al Gore’s Climate Reality Project, the Sanders Institute, the Green New Deal, and the Business and Sustainable Development Commission; the World Bank and the World Economic Forum monetize such cleverly manipulated and “femographic” youth-oriented movements through non-profit front organizations such as the Natural Capital Coalition and The Climate Finance Partnership in order to divert $100 trillion in assets currently locked up in pension funds into eco-service companies.

These people are naturally being championed by ecological groups, whose spokespeople espouse sentiments like those of Hannah Laga Abram of Santa Fe [4]:

We are living in the sixth mass extinction. Ice is melting. Forests are burning. Waters are rising. And we do not even speak of it. Why?

Because admitting the facts means admitting crimes of epic proportions by living our daily lives. Because counting the losses means being overpowered by grief. Because allowing the scale of the crisis means facing the fear of swiftly impending disaster and the fact that our entire system must change.

But now is not the time to ignore science in order to save our feelings. It is time to be terrified, enraged, heartbroken, grief-stricken and radical.

It is time to act!

And we get manifestos such as those supported by the UK’s Student Climate Network [5]:

We’re young, we’re students and we’re calling for change. Our movement started when tens of thousands of young people took to the streets in towns and cities around Britain, in an unprecedented emergence of a youth climate justice movement.

We’ve joined a movement that’s spreading rapidly across the world, catalysed by the actions of one individual in taking a stand in August last year. Greta Thunberg may have been the spark, but we’re the wildfire and we’re fuelled by the necessity for action.

The climate is in crisis. We will be facing ecological catastrophe and climate breakdown in the very near future if those in power don’t act urgently and radically to change our trajectory. Scientists have been giving increasingly dire warnings about the state of our planet for years, with the urgency and severity of their message escalating in recent times. It’s abundantly clear: change is needed, and it’s needed now!

Each and every one of these individuals is working hand-in-glove in an Ecological-Refugee Complex, reminiscent of the Military-Industrial Complex that Dwight D. Eisenhower warned about in his famous farewell address. This includes ideological allies such as Sunrise USA, the Karam Foundation, Refugees International UNHCR, ORAM, Refugee One, Save the Children, World Vision, Oxfam, War Child International, Medecins Sans Frontieres, and IsraAid, which are all queuing up to give succor to people such as Mohsin Hamid, who wrote in his National Geographic article “In the 21st Century, We Are All Migrants [6]” that migrants

move when it is intolerable to stay where we are. We move because of environmental stresses and physical dangers and the small-mindedness of our neighbors – and to be who we wish to be, to seek what we wish to seek.

But at whose expense and at what cost?

There is still widespread dissension amongst the scientific community about the reality of climate change, with senior figures of international standing and unimpeachable repute like the botanist David Bellamy; the meteorologist Lennart Bengtsson; Piers Corbyn of WeatherAction; Professor Judith Curry, Head of the School of Earth and Atmospheric Sciences at the Georgia Institute of Technology; and Steven E. Koonin, a theoretical physicist and director of the Center for Urban Science and Progress at New York University, who question the assertions being made day-in-day out by the entrails-sifting soothsayers who almost seem to want the sky to fall in on us.

These are devotees of disaster who promote exaggerated and spurious claims in order to boost their research grant applications, such as in the no-smoke-without-fire case of the e-mails leaked from the Climate Research Unit at the University of East Anglia [7], suggesting that scientists who favor climate change are manipulating the data to prove their claims. And these people simultaneously turn a blind eye to a much more obvious disaster in the making, uncontrolled population growth in Africa and the Indian sub-continent, with Africa having gained an additional 477 million mouths to feed since 1980, and India’s population having doubled between 1975 and 2010; in a related issue, the Pakistani diaspora has increased by a staggering fifty-seven percent since 1998. No efforts to save the planet can succeed without taking these factors into account. As Dr. John Feeney, an American writer on environmental issues, has said [8]:

It’s the greatest taboo of environmentalism: the size and growth of the human population. It has a profound impact on all life on earth, yet for decades it has been conspicuously absent from public debate. Most natural scientists agree our growing numbers and our unchecked impact on the natural environment move us inexorably toward global calamities of unthinkable severity. They agree the need to address population has become desperate . . .

The uncomfortable reality is that while Western governments are trying to cut their carbon emissions, China is simultaneously expanding its coal-fired power stations, all while the UN and the EU argue for open borders and the mainstream media seeks to weaponize idealistic young people’s good intentions and genuine concerns in order to fast-track the globalists’ goals. One can only remember Jean Raspail’s colorful predictions in his masterful The Camp of the Saints in 1974:

And now, stretching over that empty sea, aground some fifty yards out, the incredible fleet from the other side of the globe, the rusty, creaking fleet that the old professor had been eyeing since morning. The stench had faded away at last, the terrible stench of latrines that had heralded the fleet’s arrival, like thunder before a storm. . . . How many of them were there, out on those grounded wrecks? If the figures could be believed – the horrendous figures that each terse news bulletin had announced through the day, one after another – then the decks and holds must be piled high with layer on layer of human bodies, clustered in heaps around smoke-stacks and gangways, with the dead underneath supporting the living, like one of those columns of ants on the march, teeming with life on the top, exposed to view, and below, a kind of ant-paved path, with millions of trampled cadavers . . . The old professor – Calgues by name – aimed his eyeglass at one of the ships still lit by the sun, then patiently focused the lens until the image was as sharp as he could make it, like a scientist over a microscope, peering in to find his culture swarming with the microbes that he knew all the time must be there. The ship was a steamer, a good sixty years old. Her five stacks straight up, like pipes, showed how very old she was. Four of them were lopped off at different levels, by time, by rust, by lack of care, by chance – in short, by gradual decay . . . Perhaps there had been just fuel enough for this one and only voyage. Or perhaps there was no one on board anymore who felt the need to take care of such things – or anything else – now that the exodus had finally led to the gates of the newfound paradise . . . An antiworld bent on coming in the flesh to knock, at long last, at the gates of abundance . . .