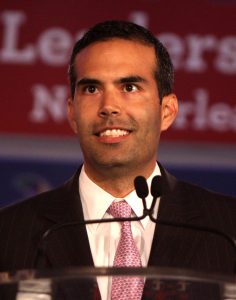 George P. Bush thinks that war needs to be declared on White Nationalism.

“Crush White Nationalist evil!” is the conservative answer to the El Paso shooting.

The overwhelming majority of conservatives have called for the government to treat White Nationalism like Islamic terror. Logically, this would mean drone strikes against American Renaissance conferences. But the conservatives who advocate for this drastic action are self-aware enough not to go that far – they just want the government to censor speech they call racist.

But conservatives are not self-aware enough to know that this will lead to their own suppression. The dopamine hit of siding with the libs is too much for conservatives to pass up. They want to create distance between themselves and identitarians, since liberals think they’re the same. The conservatives’ proposal would empower their political enemies to silence many Americans and tip the scales in the Left’s favor.

It’s idiotic, wrong, and once again proves that conservatives can’t be trusted.

Taking the lead down this slippery slope was none other than National Review’s David French [2], a constant purveyor of bad takes. He writes:

It’s time to declare war on white-nationalist terrorism. It’s time to be as wide awake about the dangers of online racist radicalization as we are about online jihadist inspiration. And it’s time to reject the public language and rhetoric that excites and inspires racist radicals. Just as we demanded from our Muslim allies a legal and cultural response to the hate in their midst, we should demand a legal and cultural response to the terrorists from our own land.

French says he first noticed the Alt Right was a dangerous movement when they began trolling him on Twitter. He knew the memes meant they were a dangerous threat, and he warned everyone about these terrifying Twitter frogs. No one listened, but now French feels vindicated thanks to the recent terror attacks.

He is smart enough to realize how stupid it is to demand drone strikes on shitposters. What French means by a declaration of war is that we censor Dissident Right speech, prevent alleged White Nationalists from owning guns, and attacking FOX News and Donald Trump for using insensitive rhetoric. French insists this policy won’t affect civil debate about immigration levels, but every person with half a brain knows that’s not the case. The only tolerable stance in this hypothetical, Rassistenfrei situation is more immigration. Immigration reduction would be racist by default.

National Review itself issued an editorial [3] demanding a declaration of war against White Nationalism. Titled “Crush This Evil,” the directive from NR’s editors declared White Nationalism “a murderous and resurgent ideology.” The editors implored the President to repeatedly denounce this ideology:

[T]he president should work with Congress to devote more resources to infiltrating, tracking, and foiling nascent plots . . . and he should instruct the federal government to initiate an information campaign against white-supremacist violence in much the same way as it has conducted crusades against drunk driving, human trafficking, and domestic violence.

I know that our country has come a long way in addressing our national birth defect – racism. But more work remains to be done. Racism of the past was overt; racism of today is often covert. It’s more casual, but no less toxic. When I was growing up, I experienced open racism, including being called a wetback. Now the racism I encounter is generally more subtle. When I ran for reelection as Texas land commissioner, I saw ugly vestiges of racism. For my work in trying to protect and preserve the Alamo for generations to come, I was accused of wanting to change the story of the Alamo and to build a statue honoring Mexican General Santa Anna. It was offensive, it was outrageous, and it was completely untrue. It was also racist.

Other conservatives, such as Daily Wire’s Matt Walsh, argued that everyone who is sympathetic to White Nationalism is “complicit” in the terrorism:

There have been three major shootings by white nationalist terrorists since October. Over 80 dead, hundreds injured. White nationalism is a cancer and anyone who offers it support or cover is complicit. Terrorism in all forms must be named and condemned, loudly and specifically.

The conservative response to White Nationalism is angrier than anything they say about illegal immigration, black crime, or antifa. Judging by their outrage, you would almost think White Nationalists were Palestinians swarming the Israeli border. The chest-thumping and war-like language is purely intended to signal to the Left that good conservatives are nothing like White Nationalists. They have no connection to the shooting or any other violence. Just blame the bad racists – who are definitely not conservatives!

Unfortunately for conservatives, the Left thinks they are just as complicit. Donald Trump, Trump voters, FOX News, and even kosher cons like Ben Shapiro were all blamed for the massacre. Insensitive comments about illegal immigration and praise for Western civilization were claimed to have inspired the shooter. Liberals insisted that no one should call mass immigration an “invasion” or defend Western civilization in order to stop further bloodshed. Congressional Hispanic Caucus chairman Joaquin Castro doxed [6] ordinary Trump donors as a way to punish those responsible for the violence. And MSNBC host Joe Scarborough said the dox was a righteous act, because those donors “fund white supremacy.”

Ben Shapiro railed against White Nationalism and endorsed the declarations of war against it, yet he was angered by liberals putting him and other conservatives into the same category. He tweeted [7]:

These denunciations did not dissuade liberals from continuing to lump them together. In fact, the calls for White Nationalism to be exterminated only inflamed the spirit of censorship. President Trump directed [8] federal agencies to work with tech companies to silence the voices of hate, likely boosted in this effort by conservative calls to do this. These idiots shout for their own dispossession, considering the large number of mainstream conservatives already hurt by Big Tech. However, this is typical for them: Their call for mass legal immigration is the perfect example.

The Left wants to define everything to the Right of Hillary Clinton as White Nationalism. Conservatives can act outraged, insist they don’t see race, and show off their adopted black kids for the thousandth time, but that still won’t persuade the people in charge. If you criticize multiculturalism, want immigration reduced, or even just refer to Western civilization in a positive manner, you may be a White Nationalist.

Calling everything White Nationalist is a good thing for identitarians. More patriotic Americans will sympathize with our cause and not dismiss us out of hand if the Left calls them racist, too. They aren’t hateful, dangerous people; they just don’t want to be strangers in their own country. If the President of the United States is an alleged “White Nationalist,” why would patriots be frightened by nice, young identitarians in red, white, and blue? The Left’s abuse of these terms does a service to us as Middle America grows exhausted with being smeared as racists.

This situation, however, is not good for conservatives. All their precious work to distance themselves from racism is being upturned by the new paradigm. Instead of ignoring these smears, they spend all their time whining about how they are not racist and hate the real racists. It only makes them look weak to their audience, and amuses the liberal elite.

The Zeitgeist favors those who will address demographic issues without apology. The average white American does not believe in the “ever-present threat of White Nationalism.” They know that attacks are carried out by fringe lunatics who were driven by mental illness and social isolation to kill. They do not believe these murderous losers are the equivalent of ISIS. To say otherwise is virtue-signaling of the most pathetic kind.

White Americans want those who will champion their interests. Right or wrong, they see that in Trump. They are not going to see that in conservatives who advocate for censorship and gun confiscation.

We will see more conservative condemnations as the 2020 campaign season unfolds. They will only reinforce liberal arguments to suppress the entire American Right and alienate Middle Americans. Cucking never pays off.