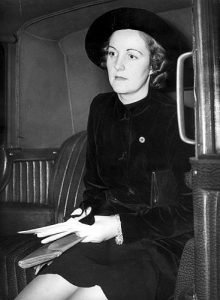 Unity Valkyrie Mitford was born on August 8, 1914 and died of the aftereffects of a head wound on May 28, 1948. One of six sisters from a landed, aristocratic English family, she became fascinated by the National Socialist movement in Germany while still in her teens. At 20, in Munich, she met Adolf Hitler. At 25, she was plunged into such despair by the outbreak of war between England and Germany that she shot herself with a pistol, in a Munich park. She returned to England, via neutral Switzerland, on a stretcher.

So much of Unity Mitford’s life is stranger than fiction, one wonders why anyone would embellish it further, especially with lurid and unlikely invention, and easily refutable lies. Yet this has happened repeatedly, in the past forty-odd years, in books and newspaper stories that often enfold Unity’s rapturous admiration for National Socialism into some sort of sexual kink.

The most ludicrous – and offensively prurient – smears of this kind appeared in a 2013 book by one David R. L. Litchfield.[1] [2] Most of it is rather what you’d get if you hashed together information from Wikipedia and any of a dozen earlier books on the Mitfords, except that for Litchfield, any old speculation or rumor is fair game to be presented as near-certain fact. For example, he argues that Unity didn’t really shoot herself with her little pistol in the Englischer Garten in Munich; or if she did, she didn’t hurt herself badly. No; her friends and family concocted the story of the half-dead would-be suicide in order to keep her from being arrested upon return to England. This is an old theory first proposed by Guy Liddell, an MI5 operative (and friend of Soviet spies Kim Philby and Guy Burgess), but not a news item [3] till the publication of Liddell’s diaries in 2002.

But then Litchfield provides new bits of his own, and they are truly original. He opens his book, Hitler’s Valkyrie, with a bedroom scene of Unity entertaining a band of SS men at a sex orgy, surrounded by “ecclestiastical candles,” swastika banners, and “silver framed portraits of Adolf Hitler.” Elsewhere, we see Unity attempting to seduce the Führer with a glass of champagne, and Julius Streicher finishing off a dinner party by ushering in some Jews (whom he conveniently stores in his cellar) and forcing them to eat grass “to entertain the guests.” Eating grass! I suppose Litchfield is recalling some childhood torture from when he was 10 or 12. But where did he come up with the rest of this stuff? Some long-buried diaries no one else has seen? Hardly. The major sources he claims are tales told by his long-dead mother and grandmother, as well as a Baroness Gaby Bentinck, née Thyssen, whose family (he explains) owned an Austrian castle near another castle “where Unity spent a great deal of time with her Austrian Nazi lover.”

There are no actual, cited source documents or interviews for this smut, of course. It’s all too absurd even to pass as hearsay. Litchfield was 70 when he published this dreck in 2013, and the most generous gloss one can put on it all is that perhaps he half-remembered some racy yarns spun by his grandmother (and others) and was inspired to spin them further. And then, in the fullness of time, he found a dodgy publisher (a “vanity” or “subsidy” press, perhaps?) to print the nonsense and provide a few review copies.

What makes the book more intriguing than the usual smut of this sort is that Litchfield took his basic framework from a much older book by an arch-veteran Unity-hater, Mr. David Pryce-Jones. That 1976 book was called Unity Mitford: A Quest (or, in the pendulously subtitled American edition, Unity Mitford: An Enquiry into Her Life and the Frivolity of Evil).[2] [4]

Litchfield mentions Pryce-Jones so often, and quotes him at such length, that it nearly amounts to plagiarism, or whatever you call it when a book comes out that is basically a more scurrilous, X-rated version of the original.

However, it appears that Pryce-Jones originally put a lot of scurrilous nonsense in his book, but it got removed to avoid lawsuits from Mitford kin. Litchfield merely took up the baton, once those kin were safely dead. The Pryce-Jones material seems to have included details about Unity’s friendship – or purported relationship – with Janos Almásy, a devotee of depraved sex and “occult necromancy,” according to Litchfield. Almásy looms large in Pryce-Jones’s account. So does Litchfield’s Baroness Bentinck, she of the castle and the filthy gossip.

With all the dirt and slander taken out, Pryce-Jones’s treatment of Miss Mitford ended up being mostly the usual point-and-splutter about Unity and her family. (She met Hitler! Her sister married Mosley! They went to Nuremberg rallies! Gasp.) But even in that expurgated version, the Pryce-Jones book was something of a literary scandal when it first came out in 1976. A review written for the Times Literary Supplement raked Pryce-Jones over the coals for misquoting, poor scholarship, and generally writing defamatory trash. The review was duly spiked; again, presumably for legal reasons. “Too malicious to print” is how Pryce-Jones recalled it in The Spectator [5] in 2015, adding that the reviewer, Alastair Forbes, thereupon “entitled it ‘The Piece the Jews Rejected’ and put copies in the post to everyone he could think of.”

This gives an idea of the sort of side-taking that went on when the book came out in 1976. David Pryce-Jones’ mother, it should be noted, was from a wealthy Viennese Jewish family. His publisher, Lord Weidenfeld (“I have faith in the integrity of Mr Pryce-Jones”), and most of the book’s defenders were also Jews.

Rather mischievously, The Spectator assigned the book to a friend of the Mitfords, Lord Lambton, a somewhat scandal-tainted former MP and junior cabinet minister. Lambton’s 1500-word review enumerated the book’s flaws, including a literary style ranging from vulgar to pretentious; “many quotations whose validity has been hotly disputed”; and utter denial by interviewees that they had ever provided Pryce-Jones with the stories attributed to them.

In Lambton’s account, Pryce-Jones had begun his work by getting in touch with Mitford family and friends, assuring them that family members were very much in favor of the book. Actually, the only surviving sister who had expressed a desire for the book, Lambton wrote, was Pryce-Jones’ friend Decca (Jessica Mitford Treuhaft), a sometime Communist married to a Jewish lawyer in California.

But some months before publication, word got around that Pryce-Jones had pulled a fast one, and the interviewees sounded the alarm:

Then there was a change of tune. No longer was Mr Pryce-Jones trying to write a ‘fair’ life of Miss Mitford. He agreed to cutting pieces of pornography, but otherwise was suddenly a little white knight in armour, the champion of the Jewish nation, persecuted because he was attempting to show that the British upper classes, Miss Mitford in particular, influenced Hitler in his massacre of the Jews. What are we to make of this extraordinary justification? If his is a genuine crusade, why pick alone on Miss Mitford, and exclude others? Crusades cannot be selective.

Warming to the theme, Lambton then went after the publisher:

But now Lord Weidenfeld, recently ennobled for politeness to Harold Wilson and Lady Falkender, has published a book, attempting to pin political responsibility upon a reckless young girl and, when its mis-statements and mis-quotations were resented, defended publication on the grounds that the British upper classes were responsible for inclining Hitler towards his Jewish atrocities. This seems to me unforgivable. It is said of Lord Weidenfeld that he does not enjoy reading. This is unfair, but his full-time occupation of genuflecting and sycophanting to every notable . . . leaves him breathless for such a mundane task. Rather does he deal with books as a butcher with joints of meat . . .[3] [6]

As you might imagine, there followed a number of testy exchanges in the next few weeks’ letters columns. Another Jewish publisher called Lambton’s review “vulgar . . . mingling anti-semitic innuendo and personal invective”; while a Canadian reader wrote in to deplore the “proclivity of some Jews to describe critics as ‘anti-semites.’”

That was in 1976-77, but the fracas was still obsessing David Pryce-Jones as of a few years ago, if his 2015 Spectator apologia is anything to go by. Revisiting the whole affair, he admits in that 2015 piece that the other Mitford sisters did not want the book at all (one ignored him entirely) – all except Jessica, that is, or so he claims. He tries to enlist eldest sister Nancy in the cause, too, only she died years before the book was produced, and could hardly have weighed in with her opinion.

Pryce-Jones recounts the “incoherent review” by Lord Lambton, as well as the spiked one at the TLS. He says nary a word about smutty gossip or manufactured quotations, which would put the controversy into proper context.

And then, at long last, he gets around to the purpose of his revisit. He wants to tell us that someone came into a trove of Unity memorabilia that she had hidden away after she came back from Germany in 1940 – and he has seen it with his very own eyes:

This astonishing material, which has been authenticated, bears on her relationship with Hitler, shows how she had worked her way into the core of the Nazi hierarchy, and may explain why the Duchess of Devonshire and Lady Mosley were so anxious to hide everything under the carpet.

Inscribing a photograph of himself, Hitler had addressed Unity by her second given name of Valkyrie and by her nickname of Bobo. . . ‘Für meine Walküre Unity,’ he signed on the title page of a presentation copy of Mein Kampf . . .

Incendiary stuff, this, to be sure – an inscribed portrait and an autographed book.

Back where we started again, pointing and spluttering. Gasp. You’d really think that after all that fuss back in the ‘70s, David Pryce-Jones would have been able to come up with something better.