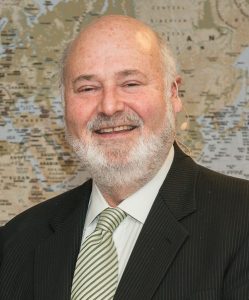 Like many in Hollywood, actor/director Rob Reiner has dedicated much of his Twitter feed to bashing President Trump. Lately, however, he’s been taking it further by condemning [2] Trump’s supporters as being just as bad as the President. There really is no end to the scorn he heaps on Trump and the sixty-three million people who put him in office:

The President of the United States is a racist. He’s made it abundantly clear his re-election is based on white nationalism. If you support him, there can be no distinction between you being a racist and a racist enabler. They are the same.

Reiner goes further than this, accusing [3] Trump supporters of being part of an “insidious cult” that condones “white supremacy & white nationalism.” He believes [4] Trump supporters are “frightened to death of the browning of America.” He also believes that he can read Trump’s mind [2]:

Donald Trump’s mind is infested. With racism, with misogyny, with lies, with bigotry, with hate.

This is pure ugliness, of course. Reiner is so arrogant he believes not only that he understands right and wrong, but that he is so free of sin himself that he can cast the most vicious aspersions on the people with whom he shares a country. It takes little effort to deconstruct Reiner’s position since he uses plain language within such a ding-dong simple Manichean context. In Reiner’s eyes, racism is bad and anti-racism is good, and if you don’t signal repeatedly that you are on one side, then you are on the other. There is no middle ground.

Does this make Rob Reiner the “meathead” he was portrayed to be in the 1970s TV sitcom All in the Family? I know many on the Right would like to call him that and mean it. But is Meathead right? Better to break this up into two questions: Is he right about Trump, and is he right about Trump’s supporters?

Well, two separate questions yield two separate answers. Of course, for Reiner, the answers are yes and yes. The standard GOP line, on the other hand, would be (or must be) no and no. Trump is not racist, they will say, and neither are ninety-nine percent of his supporters. There is no end to the evidence [5] that supports this claim. Further, they will argue that there is nothing inherently racist about wanting strong borders, about having a sense of America First patriotism, or about white people criticizing [6] non-whites when they deserve criticism [7]. They will also argue that Trump has been unfairly maligned [8] as a racist by the mainstream media. All of this is true, of course.

Here is a direct quote from Trump which will probably never find its way into one of Rob Reiner’s tweets:

Racism is evil, and those that cause violence in its name are criminals and thugs, including the KKK, neo-Nazis, white supremacists, and other hate groups that are repugnant to everything we hold dear as Americans. We are a nation founded on the truth that all of us are created equal.

Reiner would respond to this by claiming that Donald Trump has awoken a sense of nationalism and tribalism among white Americans which he believes can be dangerous to non-whites with whom he clearly identifies and who are increasingly a source of power for the American Left. Trump has shown plenty of scorn for American Leftists, especially in the media. Much of Trump’s rhetoric is more or less in line with the views of people who are openly White Nationalist and race realist, or at the very least chauvinistic in favor of Western Civilization. Further, for folks like Reiner, Trump has not done nearly enough to disassociate himself from such people. For example, after Trump supporters chanted “send her back” at one of his rallies (referring to Muslim Congresswoman Ilhan Omar), Trump disavowed the chant and claimed that he resumed his speech quickly in order to get past it. So far, so good, right? Later, however, critics claimed he didn’t resume his speech quickly enough [9], which indicates that he really did support the chant. Trump lied, in other words.

Leftists like Reiner accuse Donald Trump of being a radical representative of the Right, and no amount of counter-signaling from Trump will change their minds. They will always claim that he’s engaging in a form of crypsis while pushing forth his pro-white agenda. After all, if Reiner believes he knows what infests Trump’s mind, then surely he can tell when he is lying.

So then who is right about President Trump? In this case, I would say neither. Often, the truth is a lot more mundane than people believe, and this should be our guide when interpreting the mind of The Donald. Trump is neither the insidious villain Reiner paints him to be, nor the American hero that many on the Right see him as. Is he a race realist? Based on quotes and accounts from throughout his various careers, probably. Does he personally hate people of other races? Based on these same quotes and accounts, probably not. On the other hand, Trump doesn’t pay homage to the Left and hate white people, either. It seems that Trump is unwilling to upset the racial applecart too much because that would be bad for business. On the other hand, he is shrewd enough to listen to his base, which believes that this applecart isn’t just holding apples anymore – and is rolling in the wrong direction.

But if Reiner is only half-right when it comes to Trump, what about Trump’s supporters? For the sake of argument, we can lump Trump’s primary ideological supporters into three camps: race realists, Western chauvinists, and anti-Leftists. These are the main pillars of what we call The Right these days. Of course, we must underscore that these are ideological supporters of Trump, not blue-collar workers in the rust belt who voted for Trump in hopes that they would keep their jobs (not that there’s anything wrong with that). We must also recognize that many of these supporters (Ann Coulter, most famously) have been bitterly critical of Trump. We should also point out that conservatives and libertarians do not get a camp of their own. In 2016, Trump forced conservatives and libertarians to choose between one of these three camps or voting for Hillary Clinton (which many of them, of course, did). The same goes for Christians since, depending on whom you talk to, arguments can be made that Trump and his policies are both pro-Christian (e.g., his pro-life stance) and anti-Christian (e.g., his anti-immigration stance).

So if Trump’s biggest brain boosters are race realists, Western chauvinists, or anti-Leftists, then how is Rob Reiner wrong?

All three of these camps recognize the importance of human biodiversity in one way or another. They also categorically denounce Leftist egalitarianism in all its forms. Supporting Trump not only represents the most forceful rebuke of the Left we’ve seen since perhaps President Eisenhower, it also gives breathing room for people – especially white people – who are willing to look critically upon other races. Reiner recognizes this and then reduces the Right to its most extreme form, since that’s obviously what scares him the most. He doesn’t trust the Right to remain moderate, and it appears he’d rather lop it off entirely than risk it morphing into an Americanized Nazi Party. He may not feel that every Trump voter is as bad as that, but he blames them for supporting someone he thinks is (or could be).

Trump’s ideological supporters are everything Rob Reiner says they are . . . only good.

And if they seem not so good sometimes, then perhaps Reiner should look at his own aggressive anti-white racism and that of politicians [10] in the Democratic Party (many of whom are not white) for the reason. If Reiner and his ilk had refrained from such extremist language in the first place, maybe most of white America wouldn’t be rushing to embrace a President Trump? Can anyone blame whites for wanting to get away from people like that, or for wanting to keep people who hate them out of their country? Further, can anyone blame whites for being as scared of Left-wing extremists like Rob Reiner as Reiner is of the worst of the Right? The Bolsheviks were Left-wingers as well, and they engaged in the same kind of vicious anti-Right slander that Reiner engages in. They also presided over a nation’s destruction and the murder of tens of millions of white people. Who’s to say that won’t happen in America while influential Lefties like Rob Reiner are flapping their gums? For whites in America, today’s political struggles will soon become struggles for their very survival. 2016 indicated that whites were just beginning to do the natural thing and fight.

What makes me sad is that while Reiner has elements of truth on his side, so do his mainstream opponents. And in the ensuing madness of our politics these days, these half-truths are wielded like weapons, and so often clash rather than coalesce into a unified whole. It reminds of the great line from Bob Dylan’s song “Idiot Wind”:

Do we have to keep going after each other like this? This is the kind of strife that breaks nations apart. The end result can only be war. Is this what we want? Or is there a better way? Perhaps embracing our own ethnocentrism and respecting the ethnocentrism of others is that better way. We’ll file for that no-fault divorce [11] that we all so richly deserve and take our own apple carts away with us in peace.

Then Rob Reiner can go back to making great movies like This is Spinal Tap, and we on the Right can go back to calling him “Meathead” and not really mean it.

Spencer J. Quinn is a frequent contributor to Counter-Currents and the author of the novel White Like You [12].