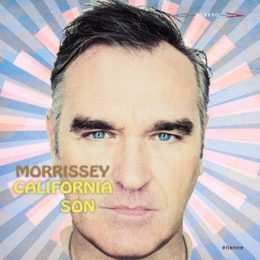 Oh, Morrissey. So much to answer for.

The former Smiths ringleader and self-described “humansexual” released his twelfth solo studio album in May, a collection of covered songs from the 1960s and ‘70s backed by such names as Green Day’s Billie Joe Armstrong and Broken Social Scene’s Ariel Engle. It’s a release anticipated by just about anyone with a political affiliation and a penchant for music by myopic British men, and Morrissey has managed to pull off the impressive feat of delivering by disappointment.

Following the release of such snarky records as Low in High School, 2019’s California Son is an eclectic assortment of covers that pretend to be innocuous. For the most part, that’s accurate, but the inclusion of such tracks as “Only a Pawn in Their Game” or the opaquer “Lenny’s Tune” serve as poorly-disguised political and personal statements that work towards two conflicting goals: public appeasement and playing dumb.

Morrissey’s latest effort deserves criticism for reasons other than its obvious political pandering, particularly in its composition and execution. As frontman of The Smiths, Morrissey displayed a talent for combining seemingly unrelated elements of pop in the band’s songs, a trait that is alarmingly absent in California Son, in which tired tropes and clichés are used to reinterpret classics in a way that feels more like a cheap cover band’s takes than a genuine creative effort.

The album’s opening track, “Morning Starship,” originally composed and sung by Jobriath, relies entirely on space-age guitar effects, cascading synthesizers, and Morrissey singing in a gleeful, decidedly out-of-character cadence more reminiscent of a Broadway trophy boy than the glum Englishman he spent years portraying himself as. While it could be argued that a fresher, brighter take on his delivery is a welcome change of pace, it’s difficult to appreciate in a track that plays more like a cheesy, half-psychedelic musical theater mockery of synthpop. Between trite staccato licks, keyboard operatics, and major-key power chords, Morrissey even graces us with a set of “la la la’s” that wouldn’t be out of place in a 2010s Top 40 hit.

Matters don’t improve much in the next entry, a take on Joni Mitchell’s “Don’t Interrupt the Sorrow.” Over the top of what sounds like a discarded Steely Dan instrumental smashed against the ambient section of a trip-hop song, Morrissey delivers Mitchell’s lyrics in a voice that barely deviates from two octaves, consequently reducing what was once a meditation on the impermanence of infatuation to a forgettable padding track. Even the surface-level “subversiveness” of a man covering it is lost as a result of his deadpan approach – though it’s not like such a thing would have saved the song regardless. During Morrissey’s time with The Smiths, he acknowledged that the band’s playful homoerotic teasing was slowly becoming less of a shock, and this was in the 1980s; covering a song peppered with references to a dying relationship with a man, whether allegorical or not, is nowhere close to edgy in the current year. It just isn’t like the old days anymore.

The album’s third track, a cover of Bob Dylan’s “Only Pawns in Their Game,” is likely the worst offender on this record, both in terms of message and style. Dylan’s song is about the assassination of the Civil Rights-era activist Medgar Evars, but portrays his assassin as a tool of the wealthy elites to sow discord among Americans through their radicalization of poor, disaffected whites. (This sounds familiar.) Dylan’s song was controversial in itself, and it’s likely that his depiction of Evars’ assassin as a victim much like she was is somewhat odd. Morrissey, however, has managed to obliterate the song’s subtext, both by virtue of covering it to begin with and through his method of doing so. By covering this song, Morrissey has succeeded in appealing to nobody in particular. He certainly did not gain any sympathy among the mainstream outlets that decried him for his comments and behavior in support of what they deem a hateful ideology, and he definitely did not win over the hearts of those whose interest was piqued by his apparent support for a populist cause. If the disaster of its messaging wasn’t enough, “Pawns” is given an instrumental track consisting of march cadence-style drumlines, drones, and organs, as if the song was some kind of funeral-march-goes-pop performance by an overly enthusiastic high school band.

The next song, Buffy Saint-Marie’s “Suffer the Little Children,” is a rather meek attempt at discordant eeriness, something Morrissey believed would be possible if he somehow combined a rhythmic piano playing flat notes, honky-tonk inflection, and punctuating horns in a formula that might be something more than its parts, but ultimately makes for a track similarly lacking a punch (as does every other song on the album). Its subject matter is likewise not well-served by Morrissey’s already-tired, half-effective bravado, and if anything becomes nothing but an odd inclusion on an album marked by a lack of cohesive soundscapes or personality. It’s a far cry from The Smiths’ own “Suffer Little Children,” which one would have thought Morrissey might have used as a kind of blueprint. Of course he didn’t, however, given his apparent effort to distance himself from the original sound and archetype of The Smiths as much as humanly possible.

Phil Ochs’ “Days of Decision” is a slice of what sounds most like Americana, if the Spector-like “wall of sound” electric guitar and electronic flourishes are ignored. In many ways, “Days” serves as a fleeting glimpse of what this album might have sounded like had Morrissey not gone for an ill-fitting maximalist approach to every song. Moz’s vocal delivery on this song comes closest to sounding at least somewhat emotional, and had it remained solely acoustic, it would be the crowning jewel of this album. Of course, this is all mere speculation, and only time will tell if Morrissey eventually remembers that less can often be more.

The album’s middle track lacks just as much character as every other: It’s Roy Orbison’s “It’s Over,” a cover featuring a mishmash of the same reverb, theatrics, and crescendo that ostensibly serve to create the crushing impact of the song’s depressing end-of-relationship theme. The reality is, as usual, more than lackluster. There seems to be little room for organics on this album, and “It’s Over” is a prime example. It’s almost as if Morrissey had thrown darts on a board to determine whether or not to use his falsetto on each track, and the end result is an alarming lack of style and appropriateness for the subject matter. Solemnity in either delivery or instrumentation is nowhere to be found on this album, with Morrissey instead favoring the musical equivalent of salad dressing.

“Wedding Bell Blues” is up next, featuring backing vocals from Armstrong. This cover of Laura Nyro’s song uses the hallmark piano and four-four drums that were typical of the era that Morrissey is covering, like “Saturdays in the Park,” and likely contains the most honest portrayal of the original piece’s intent out of any song on this album. It’s unfortunate that Morrissey’s newfound appreciation for the era’s tone has to occur on a song to which he didn’t bring any originality, and also for this to be the track featuring one of his more star-studded guests, who merely offers easily-forgotten backing vocals. Perhaps in some parallel universe, Armstrong was given the chance to share the microphone with Morrissey and inject what surely would have been a unique, pop-punk energy into the track, but as it is, this bland rendition is what we are left with.

The eighth installment is Dionne Warwick’s “Loneliness Remembers What Happiness Forgets.” It’s the album’s shortest track, at two minutes and nine seconds. In that time, we’re given what sounds like the soundtrack to a Tesco advertisement overdubbed with a handful of synthesized strings. Morrissey’s singing, again, feels like forced showmanship, with a derivative two-part rhythm occasionally interspersed with school choir-inspired seasoning, such as in the song’s final few notes, which the Moz concludes with an extended low note coming from the bottom of his throat. Happiness may cause us to forget quite a bit, but we don’t need it to forget this song as soon as it ends.

Morrissey’s rendition of Gary Puckett and the Union Gap’s “Lady Willpower” is an earsplitting cacophony of snare drum, horns, and what could only be a random man strumming chords on a display model at Guitar Center. The voice Morrissey adopts on this song wavers between a wobbly mumble, or the same performing-arts tomfoolery that he’s trotted out with such gusto on previous tracks, albeit this time with an extra helping of forced vibrato. It’s a song that begins with unearned triumph and concludes with nothing more than a sustained trumpet squeal following the chorus’ final delivery.

On “When You Close Your Eyes,” Morrissey decided that some kind of fusion of techno and trap, in the form of 2nd and 4th beat snare and a syncopated kick drumroll, would befit the beginning of Carly Simon’s song. If it weren’t enough that the entire album lacks stylistic focus, “Close Your Eyes” manages to throw together just about every beaten-to-death element we’ve already heard in the album into two entirely disjointed phases. It’s a pile of delay, reverb, and slide, with Morrissey singing over about half, leaving us with some entirely unnecessary time to ourselves at the end of the track where we can ponder each of the clichés that has led us to this moment. Perhaps if we were to close our eyes during this song, we might fall asleep – before being interrupted by a random splash of drum kit.

Tim Harden’s “Lenny’s Tune” follows. The opening phrase – “I’ve lost a friend, and I don’t know why” – is a suitable whine from a Morrissey who has spent the last several years annoying nearly everyone, including his original fanbase, anyone who was intrigued by his controversial statements [2], and those with whom he had collaborated musically in the past. “Lenny’s Tune” is the only notable deviation from the album’s general mood, but it’s not one that offers anything new in and of itself. Over a somber piano, Morrissey gives us a breathy, entirely uninspired delivery that is depressing more by virtue of its mediocrity than the song itself. Covering it, in many ways, feels more like a statement of self-important tone-deafness – a portrait of Morrissey pretending that he’s done nothing wrong. Perhaps it’s better than an insincere apology.

The album’s closer is Melanie Safka’s “Some Say I Got Devil.” Morrissey’s interpretation begins with crunchy orchestral hits in a sparse arrangement, which is then quickly joined by the droning of guitar and bass in a final testament to his apparent hatred for empty musical space. The few quiet moments on this song are of a lone piano, with Morrissey’s voice conspicuously absent throughout most of it. Those gentler sections are only sung over when there are drums and textured guitar to accompany the Moz; it’s a strange choice for an album by a man whose only liner-note credit is “lead vocals.” Are we here to listen to Morrissey sing, or to listen to his personnel play backing tracks? The answer to that question really doesn’t matter, since there’s bound to be something off-putting about either.

The closing line – “I am not in danger” – is representative of the entire album’s ethos: A Morrissey who is happy to backpedal and play it safe, both in the teasings of his public persona and in his entirely unimaginative music.

In truth, it’s quite easy to say he’s going about things the wrong way.