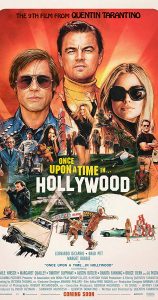 Unlike Inglorious Basterds (2009) and Django Unchained (2012), which were both drenched in violence against whites, Tarantino’s latest film, Once Upon a Time in Hollywood, is a surprisingly wholesome and pro-white film that pays homage to old Hollywood and white male movie stardom.

The main characters are washed-up actor Rick Dalton (Leonardo DiCaprio) and his stunt double and driver, Cliff Booth (Brad Pitt). The film gives a slice of their everyday lives for the first two hours or so, and then skips ahead six months to the night of the Tate-LaBianca murders, which took place in August 1969.

Formerly the star of Bounty Law, a fictional early 1960s black-and-white TV Western reminiscent of Rawhide or Wanted Dead or Alive, Dalton has now been reduced to sporadic guest-star gigs on obscure shows and has become a moody alcoholic prone to tearful fits of rage. Booth nevertheless remains steadfastly loyal to Dalton and serves as his driver and all-around assistant. The brotherly bond between them brings to mind the friendship between the characters played by Mel Gibson and Vince Vaughn in another reactionary film released this year, Dragged Across Concrete.

The real star of the film is Booth, whose physical prowess and taciturn stoicism make him a paragon of old-fashioned American manliness. Dalton plays cowboys on screen, but Booth is the closest thing there is to a cowboy in real life. In a scene symbolic of their relationship, Booth climbs up Dalton’s roof without a ladder to fix his broken television antenna.

Booth’s cool self-assurance comes to the fore when he picks up a flirtatious adolescent female hitchhiker and takes her to the Manson Family compound at Spahn Movie Ranch (he rebuffs her sexual advances – perhaps a dig at Hollywood pedophiles). At the ranch, he receives sinister glares from the women, who are depicted as hysterical, brainwashed zombies and drug-addled bums who go dumpster diving for food (the Manson women actually did this in real life). Remaining nonchalant, he decides to check up on the elderly George Spahn, whom he knew from the shooting of Bounty Law. When he returns to find his tire punctured, he punches the guy that did it (Steven “Clem” Grogan) and makes him replace the tire. Earlier in the film, Booth shows off his chops in an entertaining fight scene with Bruce Lee that also pokes fun at Oriental pseudo-profundities.

Aside from a silly, made-up motivation for the killings at the end meant to lend the situation some moral ambiguity, the film’s message is rather clear-cut. The “goddamned hippies” (Dalton’s words) are the bad guys, while Booth and Dalton are heroic emblems of old Hollywood and white masculinity. Tarantino keeps it simple for the audience and does not explore Manson’s history or his insider ties to Hollywood and the music industry. (Thanks to his access to drugs and pretty girls, Manson was able to hobnob with a lot of famous people, such as record producer Terry Melcher and The Beach Boys’ Dennis Wilson.)

Manson is a good example of the how the US government subverted the hippie movement, which bore a strong resemblance to the völkisch movement in Germany before it became a haven for radical Leftists and Jews. The evidence suggests that Louis Jolyon “Jolly” West, a psychiatrist affiliated with MKUltra, bailed Manson out of jail and counseled him on mind control techniques, grooming him into a hypnotic cult leader who would recruit impressionable hippies. West conducted extensive mind control experiments funded by the head of MKUltra, Jewish chemist Sidney Gottlieb; the Manson operation was, in effect, another experiment. The LAPD teamed up with the CIA and never once laid a finger on Manson, as Manson himself pointed out. All of this culminated in the murders, which were staged to discredit the antiwar movement by associating hippies with violence and insanity. (The narrative that Manson was a white supremacist who wanted to start a “race war” serves a similar function.) The establishment wanted to suppress the antiwar movement because they saw it as a threat to their globalist/imperialist ambitions.

The claim that Manson wanted to kill Melcher out of resentment for his lack of success in Hollywood is false. Manson was aware that Melcher no longer lived on Cielo Drive by the time of the murders; he and his friends would visit him and do drugs together.

By far the most popular book on the Manson murders is Vincent Bugliosi’s Helter Skelter, a one-sided, sensationalistic account that sticks to the official narrative and the tiresome “race war” nonsense. (It’s worth noting that Bugliosi wrote a book on the JFK assassination that likewise endorsed the official story.) See Tom O’Neill’s masterful new book Chaos: Charles Manson, the CIA, and the Secret History of the Sixties for a far more honest account. The author is an investigative journalist who spent two decades obsessively researching the case.

The film’s reconstruction of 1960s California is very impressive. Tarantino spared no expense on the lavish set pieces, which were created without the aid of CGI. (There is virtually no CGI in the film apart from one scene in which Dalton is inserted into The Great Escape.) He has a keen eye for detail; even the billboards are reflective of the period. One of the highlights of the film is the abundance of handsome old cars. The film is also packed with ‘60s pop culture references.

Once Upon a Time in Hollywood feels like an authentic glimpse of Los Angeles before it became a hellhole ridden with Mexicans, trash [2], and infectious diseases [3]. There are almost no non-whites in the film. Dalton improvises a line about “beaners” on set, and there is a scene in which Booth tells Dalton not to cry in front of some Mexicans. New Yorker critic Richard Brody has criticized [4] Tarantino’s failure to be sufficiently woke, calling the film “ridiculously white” and “obscenely regressive.”

Despite the sunny ambiance, the film is pervaded by a sense of melancholy and the awareness of an era coming to a close. Dalton’s glory days are behind him; Spahn Ranch has been taken over by the Manson Family. Spahn has no memory of Booth, even after Booth repeats his name multiple times. The year 1969 saw the release of The Wild Bunch, in which an aging outlaw gang is confronted with the death of the Wild West; Once Upon a Time in Hollywood echoes some of those themes.

Once belongs to the genre of what Tarantino has called “hangout” films. One spends most of the film getting to know the characters and soaking up the ‘60s vibe. The violence you’d expect from Tarantino does not arrive until the end. As with Inglorious Basterds and Django Unchained, Tarantino takes liberties with history: the Tate-LaBianca murders are averted, the would-be killers dispensed with.

The sequence when Tex Watson, Susan Atkins, and Patricia Krenwinkel encounter Booth at the end is one of the funnier moments in the film. The black-clad Watson pronounces that he is the devil (true to real life), only to be smoothly eliminated by Booth and his hungry pitbull. Atkins charges at Booth with a knife while screaming hysterically and gets a similar treatment. Booth then bashes Krenwinkel’s brains out. Atkins stumbles out of the house, barely alive, and lands in the pool, where Dalton happens to be lounging. Dalton ceremoniously finishes her off with a flamethrower he got on the set of a war film.

The hippies are shown to be pathetic losers who don’t stand a chance against Booth’s unflappable masculinity. Booth laughs at them and kills them with a smile. This is very un-PC, because one can only laugh and poke fun at one’s opponents if one is superior to them.

Unsurprisingly, feminist critics were outraged by the women’s hilariously violent deaths. They also complained about the small number of lines given to Margot Robbie as Sharon Tate, whose only major scene features her going to the theater and watching a matinee of The Wrecking Crew (1969), in which she had a supporting role (“Miss Carlson, the klutz”). There is another scene in which she dances seductively to Paul Revere & the Raiders. Robbie’s lack of dialogue befits her character, who functions more as a pristine ideal than a person. Her beautiful blonde looks reinforce the film’s fairytale-like quality.

Tate’s visit to the theater epitomizes the blurred boundary between cinema and reality that characterizes the film – a motif that invites a comparison between the film and the present day. The theme of decline finds parallels in Tarantino’s own career (he has declared that Once Upon a Time in Hollywood is his penultimate film), modern cinema, and white America.

Tarantino is a good example of how fidelity to the auteur tradition and the idea of cinema as an art form inevitably leads one to rebel against woke capital. Aspirations to artistic greatness are incompatible with the tyranny of equality and profit. Under woke capital, the two main functions of cinema are to pacify “oppressed” groups and to generate revenue. The destiny of cinema under neoliberalism is an endless stream of reboots, remakes, and sequels capitalizing on the popularity of ever-expanding mega-franchises. Once Upon a Time in Hollywood is a requiem for an age in which filmmaking was a craft and not a profit-directed enterprise.

Judging by the film’s box-office success ($41.1 million in three days, the strongest opening of all of Tarantino’s films), Once Upon a Time in Hollywood has struck a chord with white America. Like Dalton and Booth, white Americans – particularly white men – are sensing that their future is being taken from them. They are no longer certain that modern America represents an improvement over what we have lost. Tarantino is in the same boat.