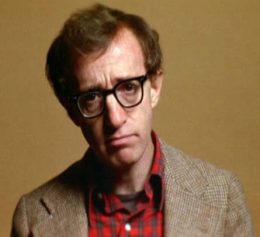 When Alexandra Stern recently included a section on me in her book Proud Boys and the White Ethnostate [2], she did so on the strength of a three-part series I wrote in 2017 called “On Vetting and Entry into a White Ethnostate [3].” At the time, I figured that the more people there were thinking and talking about a possible white ethnostate, the more likely it would come into being one day. And since I knew of no systematic method of determining who would be allowed into such a state, I thought I would take a stab at it. The articles were well-received at the time.

Stern’s treatment of the vetting algorithm I developed was predictably disapproving. For instance, she claims that it “replicates white supremacy’s annihilation [sic] of blackness,” whatever that means. But her displeasure at white people wanting to have reasonably high standards for people entering their nations reminded me of a joke by Woody Allen, of all people. Yes, I understand that the former Allan Stewart Konigsberg is in many ways a morose degenerate, and that white identitarians have very few positive things to learn from him. But this joke is an exception. It appears in the opening of his 1977 film Annie Hall. It goes like this:

There’s an old joke: Two elderly women are at a Catskills Mountain resort, and one of them says, “Boy, the food at this place is really terrible.” And the other one says, “Yeah, I know. And such small portions.”

Okay, I didn’t say it was a very funny joke.

Anyway, Stern reminded me of this joke because she taps into the contradictory – and in my opinion, childish – psychology of many non-whites on the Left: their animosity towards white people is inversely proportional to their exposure to white people. If my vetting algorithm had required that a “white ethnostates” incorporate greater numbers of non-whites, Stern would have praised me for my morality and commitment to diversity. But because I and many other white dissidents recognize that it’s better for whites to give less of themselves away to non-whites, Stern gets hysterically hyperbolic and accuses me of wanting to annihilate blackness, and likens the anti-Semitism of the “alt-right” to a sword “tipped for blood.”

So, the less of whites she gets, the more she denigrates them, just like those two old ladies in the Catskills. But this is a contradiction. Either Stern and others like her are being irrational or dishonest. If something is inherently bad, you want less of it, not more of it. Certainly, that’s how white people feel towards most non-whites, especially blacks. When they are not personally exposed to large numbers of non-whites in a non-white milieu, then having more non-whites in their country is a fine idea. But once they gain that experience and get to know non-whites for what they really are, then, suddenly, this generosity goes away.

This is what attracts me to the Dissident Right. The desire that whites have to get away from non-whites is perfectly honest and reasonable. It’s based on empirical experience, which, in turn, is based on all kinds of collectible and observable data: genetic [4], psychometric [5], anthropological [6], sociological [7], criminal [8], and historical [9]. Both whites and non-whites complain about each other, but only one side is making sense. Observe:

Which perspective is more honest and reasonable? Which is based on a healthy concern for survival, and which is the punch line of a so-so joke from a so-so movie? This is why whites should never take the complaints of non-whites seriously in a white society. Such complaints are childish, like the toddler who declares she “hates Mommy” because Mommy will not give her the requisite amount of hugs and kisses before bedtime. They are also dishonest because they conceal a selfish ulterior motive: non-whites wish to take advantage of white people solely for the betterment of themselves and their tribes.

An honest and reasonable approach would be for non-whites to praise whites for creating great civilizations, and also to state explicitly that non-whites have it better among whites than among their own kind. Mexicans do not immigrate to the United States because they want to be around Mexicans; if they did, they’d never leave Mexico. Also, non-whites would not want to transform white civilizations into something that isn’t white. That would be tantamount to killing the goose that lays the golden egg. If they were honest, they would show more respect for their generous white hosts and for the Truth. Non-whites don’t come to America or Europe because they are doing such a bang-up job running their own countries, after all.

But these people don’t show respect. They act like invaders, and they never fail to give in to anti-white bigotry [10] in their politics. And when whites quite naturally resist this, they redouble their efforts against the whites, the very people who’ve been their benefactors all along – all because they want more out of white people, not less.

This is where “white supremacy” comes in. What is a white supremacist? In the eyes of non-whites, a white supremacist is a white person who wants to get away from non-whites: to effectively give them smaller portions, or none at all. Such a person will want to enforce borders, reduce immigration, eliminate birthright citizenship, and make it easier to apprehend and deport illegal immigrants. Such a person voted for Donald Trump in 2016, and will likely do so again in 2020. Such a person does not, however, advocate for a return to slavery or Jim Crow laws, nor does he push for aggressive, violent, or illegal actions against non-whites. Such a person is not necessarily “racist” or have anything personal against non-whites. But that doesn’t matter. Because such policies harm the racial interests of non-whites, non-whites consider them enemy action regardless of intent.

This is why “white supremacy” has become such a bugbear [11] as of late. This is why non-whites have become so hysterical [12], and are so quick to attribute the most evil intentions [13] to the majority of whites. This is why they demonize [14] and promise to wage war [15] against the very people who’ve been their benefactors for decades. It all boils down to the Woody Allen Fallacy: The very thing they profess to hate is what they desperately want more of.

Non-whites need to be called out for this. They also need to understand that they have no right to complain about white people, because white people don’t owe them a portion of anything.

Spencer J. Quinn is a frequent contributor to Counter-Currents and the author of the novel White Like You [16].