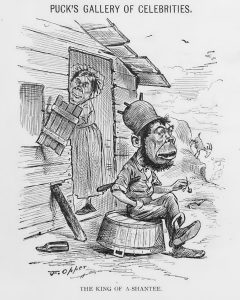 Majority-minority America will not be kind to whites. Whiteness will mark you as a second-class citizen, a blot on your soul that excludes you from affirmative action and social respect. Ambitious social climbers will pretend they are non-white or cling to another protected class status to get out of their Caucasian hell.

Signs of this nightmarish future are already present. Plenty of whites claim they’re something else to achieve sacred victimhood. There are a few ways for whites to do this. First, they claim their ethnic group was discriminated against, and that makes them different from other whites. Second, they claim they have some non-white blood or come from a non-white country, and thus they aren’t white. Third, they emphasize being gay, trans, disabled, or some other protected class to gain minority status. Whichever path whites choose, they fortify anti-white sentiment and further erode the historic American nation. But minorities will not allow the whites in on their precious territory – blacks won’t buy the Irish “we wuz slaves!” act.

Whites will mainly perform this ethnomasochism among themselves, which is the point. If white Americans refuse to see themselves as whites or emphasize another identity over race, they undermine attempts at solidarity. The lack of racial consciousness to resist dispossession and the acceptance of multiracial America is what the globalists desire. That’s why elites encourage whites to accept other identities.

Outdated ethnic white grievances entered the public eye last month. CNN host Chris Cuomo, the Italian-American son of Mario Cuomo and brother of New York Governor Andrew Cuomo, was called “Fredo” by a random person. Cuomo flipped out and threatened to assault the man. He claimed Fredo is the n-word for Italians. (Fredo refers to the hapless Corleone brother in the Godfather series.) The flare-up over such a frivolous insult may have resulted in a suspension for most television personalities. Not for Cuomo. CNN claimed “Fredo” was a vile slur and stood by its host [2]. Other outlets [3] seriously considered the comical event a serious act of bigotry. The Fredo slur was placed alongside century-old lynchings and the 1924 Immigration Act in the sufferings of Italian-Americans.

Italians have long been more sensitive to stereotypes and perceived slights than other whites. Mob movies love to portray Italians as the victims of WASP bigotry. The Italian-American Civil Rights League was a powerful force in the 1970s and forced Hollywood to tiptoe around Italian associations with the mafia. But Italians can no longer claim to be the Other. They’ve moved out of the ethnic enclaves and into the suburbs. Everyone, including themselves, sees them as white.

But victim status is far more valuable today. Italians still want to see themselves as oppressed by the Anglo mainstream to obtain status. In Chris Cuomo’s case, it worked. Conservatives mocked the victim signaling, but the rest of the media pretended Italians are an oppressed minority.

Other white ethnics want similar status. The Irish nurse long-dead grudges against Anglos for indentured servitude, nativism, “no Irish need apply signs,” the potato famine, and anti-Catholic bigotry. Irish ethnic animus partially inspired the Kennedy family’s promotion of mass immigration and the “nation of immigrants” myth. The Kennedys saw themselves as undertakers of America’s historic WASP elite and leaders of the white ethnic takeover. This animosity led them to ally with Jews, blacks, and other non-Anglos in their quest to remake America’s elite. The consequences of this alliance have not been good for our country.

Even though many Irish-Americans like to repeat Noel Ignatiev’s dubious assertion [4] that the Irish were once non-white, few would say they aren’t white today. They don’t have Italians’ olive skin and dark features to persuade anyone they’re non-white. But the victim status is enough to make them feel different from the generic whites – even though a significant number of whites have Irish ancestry. But in the future, some Irish may insist they’re non-white. “I’ve never seen myself as white,” Sinn Fein leader Gerry Adams said in 2016 [5]. Hilariously, he said that to defend his use of the n-word.

Non-whites won’t accept the Irish and Italians as fellow non-whites, but they will appreciate their efforts to divide white America into hostile ethnic groups.

Things get a little trickier for whites who claim some non-white heritage or fit in the broad category of Hispanic. Some whites can get away with this, but others can’t. Most Hispanics – even if they have blond hair and blue eyes – can get away with calling themselves non-white. Blond-haired, blue-eyed Anglos who call themselves Native American are not so lucky. Elizabeth Warren learned this when she said a DNA test proved she was authentically Indian. The test showed she was less than one percent Native, and it was a major humiliation for Warren [6]. But that humiliation didn’t obliterate her past achievements due to stolen ethnicity. She likely got a job at Harvard because of her phony minority status. Warren shows a path for very white Caucasians to get a pass in a majority-minority America – just make up Native ancestry and hope your progressive politics deflects serious inquiry.

White Hispanics are rarely questioned about their non-white credentials, regardless of how white they look. Nobody ever calls Jorge Ramos, Debbie Murcarsel-Powell, or Jessica Alba white, though they all look very white. (Alba absurdly complains [7] she lost roles because she wasn’t white enough.) The only time one can be a dreaded “white Hispanic” is if they run afoul of progressive elites. Dark-skinned George Zimmerman was dubbed a white Hispanic [8] after he killed Trayvon Martin in self-defense. Zimmerman is far darker than Jorge Ramos, but only one of them gets called a white Hispanic. It’s a political category rather than a racial category.

Hispanics once demanded to be called white, but now insist they are non-white. The perks have changed since the 1950s, and they want to reap the rewards of dark features.

If you don’t fall into any of these categories, you’ll either have to accept you’re just a white paypig or find another protected class identity. Gays get their own month, and every corporation congratulates them on who they have sex with. Trans folks arguably get more privileges than any other group: They’ve made entire cities give up on gendered-bathrooms, made presidential candidates list their gender pronouns, and forced public education to teach their insanity to young children. They may soon force the government to cover gender-reassignment surgeries as a life-saving public service. Nobody has revolutionized our current era more than transgenders. But to join them, you have to cut your dick off – so most whites will not go down this route. There are other sexual identities whites can adopt to separate themselves from traditional society. They can say they’re bisexual or even asexual to receive platitudes and special treatment. But no identity is more powerful than trans.

There’s also the disability route, but this requires one to lose one’s mobility or brain functions. Many whites say their depression or anxiety make them disabled and deserving of special treatment. This is an inferior place to LBGT, but it has its perks. The mentally ill do receive a lot of sympathy, especially when most of the media class shares these same ailments. The problem for the depressed and anxious is they don’t receive affirmative action for their woes.

The one group that deserves its own category is the Jews. Most Jews do not see themselves as white, and white society has historically seen them as the Other. But non-whites see them as privileged whites who support a white supremacist state in Israel. Non-whites see all the money and power that Jews have and ignore the alleged injustices of the past. Jews’ status as minorities will be challenged in majority-minority America as Jews loudly proclaim they’re non-white. In spite of their long support for minority identity politics and anti-white rhetoric, Jews will likely lose this challenge. They have too much wealth and power to persuade blacks and Hispanics that they’re on the same team.

Jews will have the ability to differentiate themselves from whites when it comes time to rant about the evils of the historic American nation and how we’re a nation of immigrants. But they will be lumped in with whites most of the time, regardless of how much they protest.

Identity is the definitive category of our time. Whites who refuse to accept themselves as whites only empower our enemies. It doesn’t matter what the English did to Ireland four hundred years ago, or if you got called a wop at a bar. You’re white now, and that’s all our enemies see you as.