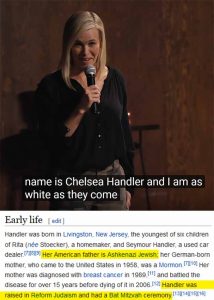 About a month ago an anonymous user on 4chan – a Cantonese swallow’s nest recipe board, and one of the darkest corners of the Internet – suggested that his fellow users impersonate G-d’s Chosen People on Twitter to bypass Anti-Defamation League censorship. I was going to comment on the resulting controversy, but I figured someone else would beat me to it, and then forgot about it. I was spurred to action when I saw that the Jewish comedienne Chelsea Handler is scolding her“fellow white people” for our “white privilege,” “unconscious bias,” and “institutional racism” in her new Netflix “comedy” special.

Handler’s gaffe is precisely the sort of thing that inspired the 4chan plot to begin with. People have noticed a striking pattern whereby self-declared Jews will arbitrarily pose as white before spewing anti-white vitriol over social media. Case in point: Jewish celebrities promoting the “I’m white, but anti-white” mantra. Recently we’ve had two new examples in Rosanna Arquette (Sean Burch in The Wrap, “Rosanna Arquette Takes Twitter Account Private After Confessing ‘Shame’ for Being ‘Born White and Privileged’ [2]”) and the overexposed disgruntled cat lady, Chelsea Handler.

It’s not enough that we have Jewish nobodies on Twitter collectively shaming white people while pretending to be us; celebrities with media megaphones are doing it, too! Did they forget that their Wikipedia profiles contain their personal histories outing them as Jewish, or is this more tiresome chutzpah? And can they really blame us for pretending to be Jewish online, when Jewish celebrities have a long history of assuming gentile stage names going back to the very founding of Hollywood (ostensibly for fear of anti-Semitism)? Can they not acknowledge that the tables have turned, and that Jews like the Anti-Defamation League’s Jonathan Greenblatt are the new McCarthyites, chasing shadowy interlopers? Have some self-respect and common decency, for Pete’s sake!

Many who attempt to engage these hypocrites are summarily banned for “anti-Semitism.” Consequently, pretending to be Jewish online is a no-brainer and is almost necessary given the authoritarian censorship throttling public discourse in the new town square of the Internet. Anti-white hate groups such as the Anti-Defamation League and the Southern Poverty Law Center boast of their partnerships with Silicon Valley tech firms and the Ivy Leagues in developing AI algorithms that censor any criticism of Jews [3] and any explicit expressions of white advocacy. Consequently, those of us who wish to exercise our First Amendment rights on YouTube, Facebook, and Twitter are being forced to engage in reverse-crypsis. By becoming “wolves in sheep’s clothing,” activists hope to fly under the algorithms’ radar and subtly demoralize Jews tit-for-tat.

The tactic isn’t new, as emphasized over at Slate in Rachelle Hampton’s “4chan Trolls Impersonated Jewish Twitter Users. Again. [4]” However, Hampton only links to a small number of unrelated cases dating back to 2014, implicating 4chan pranksters in grassroots campaigns that rustled jimmies of the non-Jewish variety. She conveniently fails to mention that it was Jews who invented the practice of posing as whites, long before Twitter was ever invented. Hundreds of self-identified Jews, mostly nobodies but some of whom are journalists, actively engage in this tactic on social media. The goal seems to be the collective vilification and demoralization of white people, a group with whom they do not actually identify. Are they marked for unpersoning by the ADL? Pfft –they ban any account exposing this hypocrisy! Luckily someone has archived the tweets of one such account [5], preserving the incriminating evidence and the culprits involved. Have a look, if only to remind yourself of the kinds of people we’re dealing with. 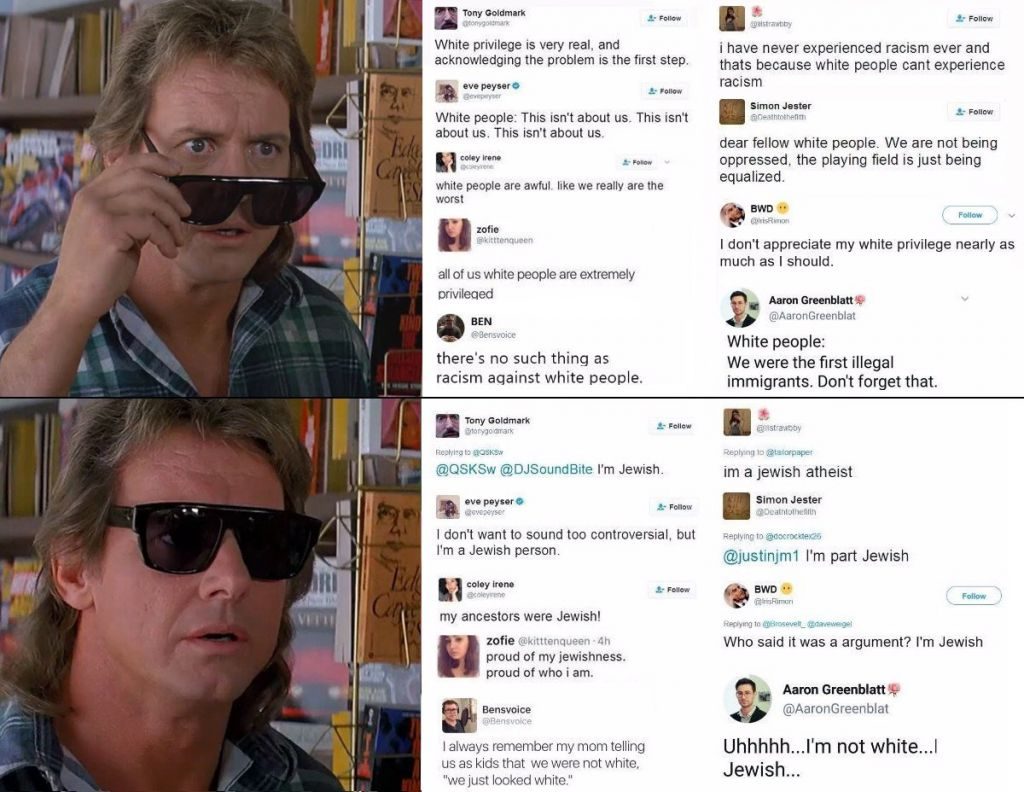 A small selection of self-described Jewish twitter users prefacing their anti-white activism by posing as white. For hundreds more, see this archive [5]. Indeed, those truly guilty of benefiting from white privilege are those who don’t identify as – but are perceived to be – white.

It seems the fake-Jew strategy was first broadcast sometime in late 2017 (Yair Rosenberg in The New York Times, “Confessions of a Digital Nazi Hunter [7]”). This melodramatic basket case fancies himself the modern standard-bearer of actual Jewish “heroes” who held real Nazis to account for war crimes. To him, anybody suggesting that “white privilege,” “white supremacy,” and “white fragility” are in fact euphemisms for Jewish privilege, Jewish supremacy, and Jewish fragility has perpetrated another shoah on them. What happened to the Golden Rule, and isn’t turnabout fair play?

The “mastermind” of the latest salvo provided helpful tips to create a kosher identity in his rambling, Hitlerian manifesto. Participants can take advantage of this Website [8] (it automatically cobbles together photographs to form faces of people who don’t actually exist), and this name generator [9] (armed with traditional Jewish names, ripe for the picking). Heeding the call to arms, a large number of crypto-goyim began tweeting posts beginning with the treacherous words “my fellow Jews.” The hyper-hypocrisy [10] of our blue-checked twitterati was being exposed by what seemed like friendly fire! Favored topics included Israel’s immigration policy, its treatment of the “non-existent” Palestinian people, and any number of smaller shanda fur di goyim, like the rampant rape of underage shiksas by untouchable VIPs of the tribe. The sky was falling – no, it was another schism!

In the end, the first surge was undone by its rush to battle: The “shadowy conspiracy network” was quickly uncovered as it impatiently and immediately attacked, rather than waiting for an opportune moment to interject a carefully-worded message for maximum, devastating political effect. Hundreds of accounts conspicuously registered on the same day – not too bright, guys – were rounded up by Twitter’s Trust and Safety Council, sent off to the gulag of accounts suspended for violating terms of service, never to be seen again. If you’re going to participate, register on a random date and don’t out yourself immediately, you big dummy. Despite the short window of activity, the highly-coordinated response reveals that the 4chan trolls struck a nerve, and they may yet do so again, as Jews increasingly become the only people allowed to post anything online. Shalom!