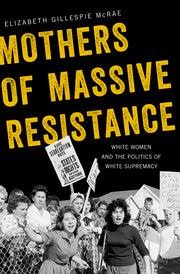 It is unlikely a book titled Mothers of Massive Resistance would have been published at all except for the fact that white women voted against Hillary Clinton in the 2016 election in enough numbers to sink her election chances. In the ensuing Leftist weep-festival, a sizable number of Leftists threw women out of the “women and minorities” coalition that had been their staple since the mid-1960s. Elizabeth Gillespie McRae decided to investigate and found that in the past, a great many women were, in fact, ferocious in their resistance to “civil rights,” and their actions revitalized the conservative “New Right” of the 1970s and helped bring about the Democratic Party’s realignment in the South that occurred in the late 1960s.

Mothers of Massive Resistance suffers from two typical Leftist flaws. First, it is written in the snowflake-speak of contemporary academia. For example, on page 218, we find that “[a]ll along the political spectrum, white women invoked their gendered identities . . .” This sort of writing style occurs throughout, and it causes the book to come across as less serious than it should be. Second, the book offers no real summation of the basic beliefs of these women. They are merely “white supremacists.” By ignoring these women’s actual motivations, the book is just propaganda masquerading as scholarship. As written, the women in this book are “Beckys [2]” who go about fighting for “white supremacy” for no apparent reason. McRae doesn’t ask why exactly women, often with little means, would engage in political activism which runs counter to the fashionable narrative and which brought them no material benefits. Indeed, many of these women embarked on political crusades that went completely against the conventions of their time and place. There is not much on the JQ in this book; instead, the study sheds light on those activists who sought to maintain segregation between whites and Congoid sub-Saharans.

As a “white supremacist” author, I’d like to offer the likely reasons why these women resisted the “civil rights” agenda that metastasized in American culture in the 1930s and then further expanded in the 1960s:

It logically follows that resisting “civil rights,” which is not about rights but is rather a racial attack, is something that white women would want to resist. I’d also like to add:

McRae found that “[w]hite women were the mass in massive resistance.”[1] [3] The narrative anchor of this book is the public lives of four extraordinary women: Florence Sillers Ogden [4] (Mississippi), Nell Battle Lewis [5] (North Carolina), Cornelia Dabney Tucker [6] (South Carolina), and Mary Dawson Cain [7] (Mississippi), although she begins her story by describing the clerks who implemented Virginia’s pro-white Racial Integrity Act. These women worked in government agencies, and enacted reforms which caused mixed-raced individuals in the Old Dominion’s hinterlands to become categorized as black rather than white.

There are also other women named in the book who I found remarkable but who weren’t a major part of the narrative. One is Margaret C. Robinson [8] of the Massachusetts Public Interest League. Robinson [9] was married to a Harvard professor, and was both an anti-feminist and an anti-Communist. Mrs. Robinson even published in Henry Ford’s Dearborn Independent, so she is very much a Yankee participant in the Yankee-Jewish conflict in North America, and her activism included alliances with northern Irish Catholics as well as Southerners. She often reached out to both Catholic and Protestant religious leaders. The other is Mildred Lewis Rutherford, a Southern educator who focused her work on ensuring that school textbooks weren’t – to use modern parlance – anti-white, politically correct beatdowns. Rutherford brought the Southern point of view to history texts. McRae finds this shocking, but ignoring the Southern point of view in the Civil War is historical malpractice. After all, why would more than a million Southern men wake up one morning in 1861 and embark on a risky crusade for no apparent reason?

Florence Ogden was a Mississippian and a lifelong fan of Franklin Delano Roosevelt. She would remain a Democrat throughout her life. She had no children of her own, but was a devoted aunt. She was a member of the Daughters of the American Revolution (DAR) and wrote a column called Dis an’ Dat. In her column, she communicated pro-white messages. She supported the House Un-American Activities Committee and disliked immigration. She wrote that “[a]ll of the isms of Russia, Poland, and Czechoslovakia rolled into one” could not compare to the democracy crafted “by men who rode horses, fought Indians, hewed forests, tilled land, and marched to battle so that America might be free.”[2] [10] Of course, the -isms to which she was referring weren’t invented by Russians, Poles, or Czechs, but by Jews, but it did help to communicate the idea to white Americans that Communism was a foreign virus that had no place in America’s heritage. Ogden didn’t like the United Nations, and predicted – accurately – that an independent black Africa would fall apart.

North Carolina’s Nell Lewis had a philosophically inconsistent career. Like the other Beckys involved in “massive resistance,” she was from a prominent family. Initially, she was something of a Leftist. Her early career included activism on behalf of two black men who lost their feet to frostbite while in police custody. She was also a suffragette, a feminist, and a writer. Lewis felt comfortable with the minstrel-show version of black culture, with mammies, songs about pickin’ cotton, and such. She felt blacks had a place in America, but that their place was in the sharecropping industry, and that it was the duty of whites to protect the blacks who worked in such humble jobs.

Her views went further towards the Right, however, as the “civil rights” movement made gains in the 1930s and ‘40s. She feared that her fellow Southern whites were apathetic to the dangers of creeping “civil rights.” Lewis accurately predicted that public schools wouldn’t genuinely become integrated and that private, segregated academies would develop. By the 1950s, Lewis had gone from concerns over “police brutality” to apathy in response to Emmett Till’s murder. Lewis also correctly predicted race riots as the natural end of “civil rights,” and believed that “you can’t get Negroes to work at all.”[3] [11] Nell Lewis’ ideological transformation probably had two causes: First, as black self-assertion increased, Lewis’ place as a white liberal supporter of blacks evaporated. (It is important for white advocates to recognize that whites involved in non-white uplift can become disillusioned and switch sides.) Second, she saw the danger in Communism, as well as in black crime and militancy.

Mary Cain was an anti-New Dealer. She lived in Pike County, Mississippi, and ran a newspaper called the Summit Sun. She didn’t like Prohibition, Social Security, and other forms of federal intervention in the economy. Cain reached out to Republicans in New England and the Midwest, and helped lay the groundwork for the party’s realignment in the South for the 1968 Presidential Election. That was an extraordinary thing: The Democratic Party had been the party of the South for more than a century. But the South needed a change after the “civil rights” revolution, and Cain had a ready answer.

The most extraordinary woman in this bunch is Cornelia Tucker. She was widowed with four children, and then got involved in politics following Franklin Delano Roosevelt’s court-packing plan.[4] [12] Tucker also realized that the Democratic Party had undergone a considerable ideological shift during its 1936 convention in Philadelphia. The party changed the rules so that Southern delegates couldn’t vote as a bloc in order to overturn a nomination. What’s more, the party began to allow black delegates to be seated, and had a black minister deliver the invocation. Thus, Tucker became a Republican in South Carolina at a time when there were no white Republicans there. She also reached out to people outside of the South. Tucker worked tirelessly to get South Carolina to adopt a secret voting ballot, and carried out several suffragette-style stunts to raise awareness of her causes, such as grabbing the microphone at events and wearing a dress made out of newspapers.

The latter two women were incredibly farsighted. They recognized early on that the Democratic Party had hitched its wagon to the “civil rights” movement. All of the women mentioned above recognized that “civil rights” would become a disaster. Tucker and Cain paved the way for Southern whites to assert their interests in a different political party after the transformations of the 1960s. Indeed, “civil rights” happened in part because Democratic men in the South could do little to head off the problem during the 1930s and 1940s: Too many Southern whites were dependent upon patronage jobs, were serving on committees, were awaiting a judicial appointment as a Democrat, and so on. They had to ignore the rise of blacks within the party because they had families to feed and careers to advance. The women, on the other hand, were free to state the truth.

Mothers of Massive Resistance likewise portrays the difficult relationship that white advocates have with Christianity. Florence Ogden organized a petition drive to cancel the appearance of a minister, Alvin Kershaw, at the University of Mississippi, since he was a supporter of the NAACP. “For white Mississippians adherence to segregation trumped Christian service, devotion, and education,” McRae tells us.[5] [13] On the other hand, Cornelia Dabney Tucker believed that protesting the Supreme Court’s 1962 ban on public prayer in schools was a way “to unite ‘the Hillybilly and the city dweller, the Southern Bible Belt and Quaker New England, the Washfoot Baptist and the aristocratic Episcopalian’ in a unified conservative movement.”[6] [14]

All segregationists predicted that Northern whites would come to the same views as Southerners after they experienced greater exposure to blacks. Florence Sillers Ogden’s prophecy was the most specific. She stated that “when racial integration came on a yellow school bus and threatened to reorder the daily lives of northern and western urban white women, these women would”[7] [15] come around to her way of thinking. Indeed, “the outrage over busing could be understood as the moment when massive resistance when undeniably national, becoming truly massive.”[8] [16] The final part of the book is an in-depth discussion of the resistance in Boston to the policy of busing blacks to white schools.

McRae is utterly hostile to the worldviews of the women she profiles, but her book can be seen as something of a manual for anti-whites. She points out that female activists are free to challenge the direction a male-dominated institution is headed in a way that men cannot. She shows how ordinary data entry clerks can help whites. She also explains that women can influence society through teaching, textbook discussions, and in other areas that aren’t initially noticeable. White advocates must be inclusive of women and put them in positions where their strengths are best suited. Probably the most important thing we can do to help our women in the short term is to support their natural drive to prevent interracial marriage.

Finally, although these women were all over the map on various issues – pro- and anti-suffragette, for and against Christian values, for and against the New Deal – they were nevertheless united in defending their people. We should follow their example.

[4] [20] In 1937, Roosevelt attempted to expand the membership of the Supreme Court so that he could appoint his own judges to overrule its conservative judges in support of his New Deal. It was blocked by Congress.