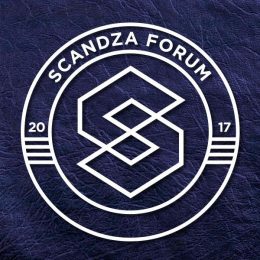 On Saturday, October 12, 2019, the Scandza Forum is returning to the Danish capital after our successful event there in September 2018. Only two weeks remain until it happens!

As usual, we give you an all-star line-up of speakers:

Dr. Tomislav (Tom) Sunic (official Website [2]), a former professor at UC Santa Barbara and a former diplomat, is the author of several books in English and French, as well as numerous articles in German. He is a regular contributor to The Occidental Observe [3]r and an advisory board member of The Occidental Quarterly [4] and the American Freedom Party [5]. You will find an interview with him here [6]. This will be his first appearance at the Scandza Forum.

Rasmus Paludan, a criminal defense attorney, is the leader of the Danish political party Stram Kurs (Hard Line), which proposes ethnonationalistic utilitarianism as its philosophical base and Danish identitarianism and libertarianism as its two political pillars. In the Danish parliamentary elections on June 5, 2019, the party barely missed the 2% cutoff, when it received 1.8% of the vote (corresponding to three and a half Members of Parliament). Two former Danish intelligence service chiefs have reported that during the election, Paludan received the same level of protection that has only been previously offered to American presidents on state visits. Many will recognize him from his spectacular YouTube videos, some of them with around a million views [7], in which he goes to immigrant neighborhoods in Denmark and engages in direct discussions with Muslims.

Greg Johnson, PhD, founder and editor of Counter-Currents/North American New Right, former editor of The Occidental Quarterly, and author of innumerable articles as well as ten books, including The White Nationalist Manifesto [8] (San Francisco: Counter-Currents, 2018). Dr. Johnson is one of the leading theorists of White Nationalism, and he has spoken at every Scandza Forum.

Mark Collett, a political activist and author from Great Britain. He has been actively involved in the nationalist movement for nearly two decades and was formerly the youth leader and Head of Publicity for the British National Party. He now hosts He is the host of The Mark Collett Podcast and Patriotic Weekly Review [9], popular YouTube shows, and is the author of The Fall of Western Man. This is his second appearance at the Scandza Forum.

Millennial Woes is a Scottish reactionary vlogger, writer, and coordinator. He is part of the international “Dissident Right” but particularly concerned with Great Britain. His work has covered psychology, morality, religion, culture, politics and identity. Woes is returning to the Scandza Forum for the fourth time. 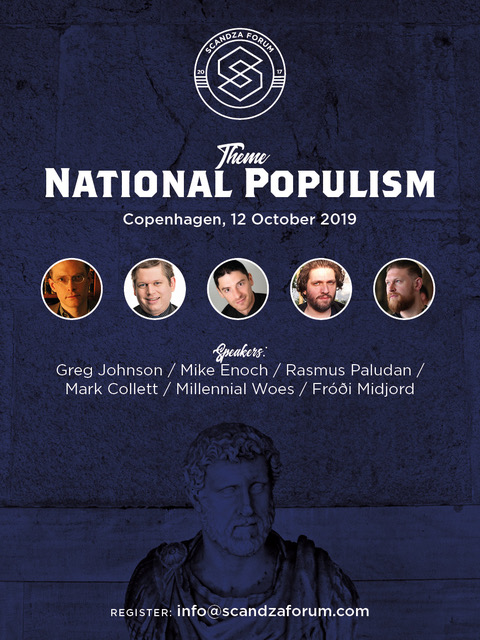 Our theme for this event is National Populism: populism suggests that the interests of the people are opposed to the interests and projects of the financial, media, and political elites; national populism, more specifically, signifies the popular rejection of the elite-driven, ideological projects of replacement-level mass immigration, outsourcing, and globalization which target the native peoples of the entire West. Donald Trump’s victory, the Brexit referendum, and the rise of populist nationalist parties all over Europe fly in the face of the liberal and globalist elite’s efforts to persuade whites that mass immigration, multiculturalism, and the dismantling of nation-states are both desirable and inevitable, and recent studies by prominent academics (e.g., Eatwell and Goodwin’s 2018 book National Populism: The Revolt Against Liberal Democracy) argue that national populism is here to stay.

In liberal democracies, which are supposedly built on popular rule, populism is routinely and surprisingly used as a derogatory term to delegitimize political currents that are not in line with mainstream media narratives. Whenever the will of the people goes against the will of the mass media, this is never taken at face value, but rather dismissed as some sort of terrible mistake or temporary setback. We will discuss what the rise of national populism means for the future of White Nationalism and how it can be harnessed to strengthen the legitimacy of those nation-states which are starting to stand up to mass immigration.

If you want to attend, please send us an email for information on how to proceed with the registration: [email protected] [21]

Finally, I want to thank our supporters and donors – you know who you are. It is with their help that the previous Scandza Forums have been made possible, and that we now are able to move forward!

I am looking forward to seeing you all in Copenhagen on October 12th.