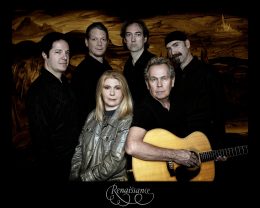 I believe I am from the light, whereas other people are from the dark.
— Annie Haslam, lead singer of Renaissance

With eyes shining as bright as Tolkien’s Silmarils, and her five octave vocals ringing out her anthem-like 1978 hit “The Northern Lights,” Renaissance’s Annie Haslam flutters across the stage, an ectoplasmic butterfly in the spotlights:

With albums like Turn of the Cards (1974), Scheherazade and Other Stories (1975), and Live at Carnegie Hall (1976) among Renaissance’s back catalog, it is easy to see why Haslam – who once sang in an East End pub frequented by the notorious Kray gangster twins, wearing a nearly see-through burgundy dress – is so fondly remembered by her fans. The Bolton Beauty’s majestic voice brings us lyrics such as we find in “A Song for All Seasons”:

Their numbers are performed with such aplomb that they bring to mind Tolkien’s Valaquenta: An Account of the Valarand Maiar According to the Lore of the Eldar from his legendarium, The Silmarillion (1977):

In the beginning Eru, the One, who in the Elvish tongue is named Iluvatar, made the Ainur of his thought; and they made a great Music before him. In this Music the World was begun; for Iluvatar made visible the song of the Ainur, and they beheld it as a light in the darkness . . .

This illustrates the popular author’s love both of music and nature, and his deep commitment to the environment, as evidenced in the Canadian scholar Patrick Curry’s excellent book on the subject, Defending Middle Earth: Tolkien, Myth and Modernity (2004) and Matthew Dickerson and Jonathan Evans’s text Ents, Elves and Eriador: The Environmental Vision of J. R. R. Tolkien (2006).

And long before the likes of the Asperger’s-afflicted chief marionette of the Greens, Greta Thunberg, jumped on the eco bandwagon, Haslam was singing songs inspired by Tolkien’s imagery such as “Faeries” (1981):

What lies beneath the Rowan tree
Magic dust that I may breathe
Starlit night, the mist entwines my fear
A faerie ring untouched by time
Secrets of the inner mind
Come to life before my very eyes
Once like a child I knew fear
“Don’t turn the light out, I’m afraid of the dark!”

These are images taken straight from the pages of the Breton folklorist Théodore Claude Henri, vicomte Hersart de la Villemarqué’s Ballads of Brittany, the Grimms’ collections of German folklore, and Joseph Jacobs’ Celtic Fairy Tales. Some of these tunes were perfectly partnered with environmental concerns, such as “After the Oceans are Gone”:

We spend our nights in shared dreams
Wrapped in a jade green mist
Our hearts running wild, as the spirit is free
Nothing compares to this
Can you picture this beauty unexplained
All the stories ever told revealing

This was beautifully complemented by the pastoral “Carpet of the Sun” (1976):

Their artistry was emerging simultaneously with the Die Grünen Leftist Green ideology that was to become dominant in Germany in the 1970s, and which has since developed into a vehicle that pushes gender equality, LGBT rights, and anti-racism. In contrast to the mid-’70s Petra Kelly-style influences of eco-feminism and environmentalist socialism, Renaissance’s work draws – or so it seems to discerning listeners – more on the traditional thinkers who likewise contemplated the issues that afflict Gaia: for example, poets like William Wordsworth and Edward Thomas; novelists like D. H. Lawrence; and thinkers, designers, and artists like John Ruskin and William Morris. These were eminent minds unencumbered with the ramblings of This is Not a Drill: An Extinction Rebellion Handbook, the Greens’ Daniel Cohn-Bendit’s destructive contra-cultural pretentions, and political scientist Susan George’s naïve academic assumptions about fair trade, social justice, and consumerism.

Instead, Haslam has worked with wonderful lyricists like John Tout, Michael Dunford, and Betty Thatcher to paint wonderful word-pictures that are imbued with the wonders nature has bestowed upon us, as in songs like “Dear Landseer,” which is about the Victorian painter and sculptor, Edwin Landseer (1802-1873):

Dear landseer
We have been asked by the queen
She has heard you are the best
To capture her beloved animals for all to see
Dear landseer
So highly thought of we agree
We know that your work is done
With love and care the lions of Trafalgar square
Highland scene
Full of moody skies
A mountain stream
Heather in the breeze
You paint the land with a grace and speed
You paint a dog, a stag, a hawk, a deer

The band has also composed majestic melodies that nod back to the age of empire, such as “Kings and Queens”:

Kings and Queens are running wild, lonely for each other
Princes gallant are no more staying under cover
Jesters’ jokes aren’t even funny, poking fun at sorrow
Lords and Ladies hoard their riches fearful for tomorrow

There are also more ominous overtures such as “On the Frontier,” which brings to mind novels like Dino Buzzati’s The Tartar Steppe (1940) and J. M. Coetzee’s Waiting for the Barbarians (1980):

We’re on the frontier now