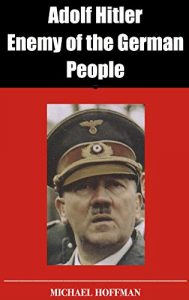 I don’t really get the “Fake Hitler” trope, but apparently it’s very seductive for some people. There is this compulsion to believe that the German Reichskanzler wasn’t the real Adolf Hitler. No, he was a body-double, a mole, a trickster, a false-flag actor, a judas goat sent out among the crowds to lead them astray. These ideas would make more sense to me if there were hordes of people out there, insisting that Uncle Dolfie was the One True Führer; but where I live, at least, these folks are pretty thin on the ground. People who come up with theories that Hitler was a charlatan are probably just people who spend a lot of time thinking about Hitler.

One of the oldest versions is the “Jewish Hitler” theory, which rests on the speculation that Adolf’s grandmother was impregnated by a young Jew when she was working as a domestic servant in the 1840s. (Nice trick there: The Führer gets to be both Jewish and the son of a bastard.) In recent years, new life has been breathed into this hoary fable thanks to the popularity of DNA testing. Ostensibly, some of Hitler’s relatives share an ancient haplogroup [2] that also shows up occasionally among North African Jews and Berbers. So perhaps, way back during the Ice Age, before there were any Jews or Berbers or Austrians . . . but you get the picture.

That idea is a stretch, but it’s no less durable or likely than the “Hitler Body-Double [3]” theory, according to which a Führer lookalike was recruited and/or cosmetically enhanced in the closing years of the war, perhaps later to escape in a submarine to South America, or maybe dying in the Bunker while the genuine Adolf, and maybe Eva too, fled to the pampas.

There’s also the “Hitler: Tool of Wall Street” idea. This had some vogue in the 1970s, although it has faded out in recent years, perhaps because it sounds too much like old Bircher conspiracy theories about the Trilateral Commission and Bilderbergers. According to this hypothesis, the Standard Oil companies, Henry Ford, the Chase Bank, and others funded Hitler’s rise in order to ensure capitalism’s hegemony, or something.[1] [4]

Then there’s the “Sleeper Mole” theory, in which the Führer-to-be is actually an agent of an international conspiracy, groomed and put in play shortly after the Great War, beginning when a freshly demobbed soldier and police spy (A. H., age 30) infiltrated the tiny Nationalsozialistische Deutsche Arbeiterpartei in Munich. This sounds like the most far-fetched concoction of all, but it was already prevalent when English newspaper writer Douglas Reed first heard it in the 1930s. “I conjectured that this man-from-nowhere might in truth be the accomplice of Communism and Political Zionism,” Reed wrote some years later.[2] [5]

And now, at last, I come to Michael A. Hoffman II (as he styled himself back in the 1980s; with maturity, he’s trimmed his byline), who has his own complex, nuanced theory of Hitler-as-charlatan. Hoffman’s notion is similar to Douglas Reed’s, although Hoffman doesn’t go all out and point fingers at Communists and Zionists. Rather, Hoffman’s Hitler is a provocateur and vandal; he took a nice thing and messed it up.

The gist of Adolf Hitler: Enemy of the German People is that there was a good and true NSDAP organization once upon a time, but it got hijacked by Hitler and his merry men. I gather this kinder, gentler National Socialist movement – we can hardly call it “Nazism” – would have been something like Hilaire Belloc’s medievalist Distributism, or maybe a Keir Hardie-ish Scottish Labourite idealism. That’s a foggy description, but it’s as close as I can guess; after all, Distributism and 1890s Labour socialism were likewise vague, and never solidified into anything you could point to.

For the author, and for us, it’s easier to look at history and say what Hoffman’s ideal German National Socialism would not have been; thus, most of the book is a bill of particulars against the political ideas that were supposedly subverted by Hitler and company. Per Hoffman, the uncorrupted NSDAP need not have wrecked the Weimar Republic. Nor would it have been sidetracked into anti-Jewish sloganeering (“anti-Judaic” in Hoffman’s idiom), or alienated such thinkers as Oswald Spengler and Gottfried Feder; nor would it have murdered Gregor Strasser and other founders of the movement during the 1934 “Night of Long Knives.” It wouldn’t have lost itself in such quasi-Kabbalistic occult nonsense as the Thule Society, or persecuted the Catholic Church. There would have been no need to stir up fear of Communism, because Stalin was far away and wasn’t going to invade Germany. (Perhaps the weakest of the book’s arguments.) A pristine and un-Hitlerfied National Socialism wouldn’t have picked wars with other countries; certainly it wouldn’t hurtled itself into the orgy of suicidal self-destruction that began in 1941 with Operation Barbarossa.

Anyway, that’s the general trend of Hoffman’s book. On the positive side of the ledger, the pure and good NSDAP would have banned usury and lifted Germany out of the snares of International Finance. This, along with peace and prosperity, would supposedly have been the major achievement of the Party. And as Hoffman continually impresses on us, opposition to the international banking system was Hitler’s major selling proposition for the Party in the early days, back before he turned coat and sold out to the usurers.

After all of this pleading, I am reminded of that cliché about Communism: about how it’s never really been tried. And that is the basic problem with Hoffman’s argument. The type of National Socialism we know from historical fact and fiction is so closely identified with the disasters of the Hitler era that counterfactual imagining becomes pointless, if not impossible. It’s as though obese people were to insist they’d only weigh 135 pounds if they were on Mars, ergo it’s Earth’s gravity that’s really at fault.

I’m not sure whom this Adolf Hitler: Enemy of the German People is aimed at. I didn’t think it was written as a corrective to Hitler Channel enthusiasts. It’s too obscurantist, written in a hectoring and didactic tone that repels rather than hooks the reader. So I was surprised to see in the author’s statement at Amazon that his book was “intended as an antidote to the Hitler hologram . . . which, tragically, has become something of a template for young radicals on the Far Right.” Now I’m wondering who these “young radicals” are. My general impression has been that such acolytes exist mainly in the fevered imaginations of hucksters at the Southern Poverty Law Center.

To put the most generous face on it, I believe the author is trying to salvage something worthwhile out of the murky and wayward political philosophies of the early twentieth century. Hofmann is one of those people who like to think a lot about thinking, but are too impatient to mold their insights into something beguiling and palatable. So he throws us a hunk of raw ideas and little-known facts, but doesn’t explain what we’re supposed to do with them. (So Gregor Strasser was a good guy – now what?) The overall effect, alas, is that the author is not really interacting with the reader; he’s working for himself, compulsively piling up details of inaccessible, hermetic mysteries. It’s the kind of stuff we used to see in 1980s ‘zines, or the RE/Search book series, or in some conspiracy-minded titles published by the late Adam Parfrey of Feral House, to whose publications Hoffman occasionally contributed.

[1] [6] Two books invariably come up in this regard: Antony Sutton’s Wall Street and the Rise of Hitler, originally published by (Sudbury, Suffolk: Bloomfield Press, 1976), but in many editions since; and James and Suzanne Pool, Who Financed Hitler? (New York: Dial Press, 1978).

[2] [7] Douglas Reed, Somewhere South of Suez (New York: Devin-Adair Company, 1951). Reed told versions of this story in several other books; this example just happens to be the volume I have on my shelf.