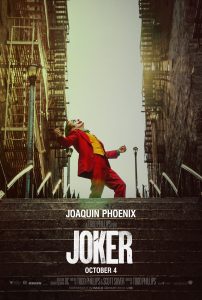 Audio Version: To listen in a player, click here [2]. To download the mp3, right-click here [2] and choose “save link as” or “save target as.”

One of the great things about Heath Ledger’s Joker in Christopher Nolan’s The Dark Knight [3] is that he does not have an origin story. Or, actually, he tells two contradictory origin stories, neither of them probably true. But the police can’t find a single shred of information on his real identity: who he was, where he came from, and how he got those scars.

The question on everybody’s mind is: How does Joaquin Phoenix’s Joker compare to Heath Ledger’s? The answer is: There is no comparison. Phoenix’s Joker isn’t even as good as Jared Leto’s in Suicide Squad. There is no question that Phoenix is a fine actor, but the character he brings to life simply isn’t compelling. He’s just a repulsive loser.

Traditionally, the character of the Joker has drawn upon the Romantic idea that madness can be entwined with genius, charisma, psychological depth, and creativity. Phoenix’s Joker is much closer to the sad truth: The vast majority of crazy people are not deep, creative, or interesting. They are just pathetic, shambling, vacant defectives who repeatedly betray and disappoint the people who are unfortunate enough to love or take care of them.

Ledger’s Joker has a Nietzschean and Heideggerian philosophy [3], which he articulates with striking words and deeds. Phoenix’s Joker doesn’t have a nihilistic philosophy. He’s just a depressive. When we first see him, he is holding a sign reading “Everything Must Go.” Yeah, it’s for a going out of business sale, but it’s also symbolic. Phoenix’s Joker does not “stand for” nihilism as a worldview. As he says later on, he doesn’t stand for anything. He has no worldview. He’s just a tortured soul, and a banal one at that.

All the other Jokers—Ledger, Leto, Nicholson, even Cesar Romero, ferchrissakes—have some charisma. They are commanding presences. Phoenix’s Joker has no charisma at all. He’s a physically repulsive stick insect of a man: unkempt, unhealthy, and slightly effeminate, reeking of cigarettes and low self-esteem. You’d want to squash him like a bug, if you’d deign to notice him at all.

There are a few flashes of a steely-eyed social competence when Arthur rehearses his appearance on the Murray Franklin Show, but it went nowhere, so it struck me as breaking character.

Ledger’s Joker launched a million memes, both because of his character and his lines. Phoenix’s Joker will have no such influence. He’s a pathetic nobody with nothing to say.

Judging from the technology and social trends, Joker is set in the early 1980s: There are no desktop computers or cell phones. Dem programs are being cut for the mentally ill, and drunken Wall Street yupsters are an annoyance on the subway.

Arthur Fleck lives with his mother Penny Fleck, who seems to be bedridden. Arthur brings in money as a clown, but he’s not that funny. Arthur suffers from mental health problems. He has been committed, he sees a counselor, and he is taking seven different medications. But because of budget cuts, the counselor and drugs are disappearing, and commitment will probably not be an option either. Soon there will be only the street.

Arthur is beaten up by some “teens” (read: brown people) so one of his colleagues at the clown agency (surely there must be clown agencies, right?) gives him a revolver for protection. When the gun falls on the floor during one of Arthur’s clown shows in a children’s cancer ward, he is fired.

Then, still wearing his clown makeup, Arthur is roughed up by some black hoodlums on a night train, pulls out his gun, and shoots them dead. No, wait, that was Bernhard Goetz. Arthur was harassed by Wall Street yuppies and shoots three Patrick Batemans dead with seven bullets from what appears to be a .22 pistol (but who’s counting?).

This inspires a Leftist uprising of black and brown people—and some white dirtbags—who begin to wear clown masks to show how sick and tired they are of being terrorized by stockbrokers on the subway.

Oh, and billionaire Thomas Wayne (Brett Cullen), who is going to run for Mayor of Gotham, says that people like him, who have made something of their lives, think that all of life’s losers look like clowns. Of course there is only one politician in America today who would say something so unpolitic. Is he supposed to be Donald Trump?

At this point, given the obvious anti-white, Bolshevik slant here, perhaps I should mention that director Todd Phillips and his co-screenwriter Scott Silver are both Jewish. However, to their credit, the entire film is not cast against type. Arthur is first assaulted by non-whites, and sullen black women play prominent unsympathetic roles, subtly underscoring that Arthur’s alienation is in part that of a poor white man in a society in which the lower classes and those who provide services to them are increasingly non-white.

As much as I feared that Arthur Fleck was going to be turned into a sympathetic victim, it is really impossible to like him. When Arthur learns that his mother believes Thomas Wayne is his father, he goes to the Wayne estate to talk to Thomas Wayne and ends up physically assaulting Alfred Pennyworth in front of young Bruce Wayne.

Then he stalks and confronts Thomas Wayne. Wayne explains that he never had sex with Penny Fleck, that Arthur was in any case adopted, and that she was committed to Arkham State Hospital for mental illness and also for endangering Arthur. When Arthur steals his mother’s file from Arkham and confirms Wayne’s story, he does not apologize to Wayne. Instead he smothers his mother with a pillow.

Arthur also savagely murders the colleague who gave him the gun. I found this scene so distasteful that I almost walked out. But then I thought of my duty to you, dear reader, and stayed to the end.

One of the obvious influences on Joker is Martin Scorsese’s The King of Comedy (1983), a dark comic masterpiece that almost reaches Fawlty Towers levels of pure cringe. Robert De Niro plays Rupert Pupkin, a deranged man who wants to be a standup comic and is obsessed with successful comedian and talk-show host Jerry Langford (brilliantly played by Jerry Lewis).

Like Rupert, Arthur lives with his mother (although there is some suggestion that Rupert’s mother is dead and that, like Norman Bates, he has only an imaginary relationship with her).

Both Rupert and Arthur have imaginary relationships with talk-show hosts whom they eventually meet in real life. In Arthur’s case the host is Murray Franklin who, to tighten the connection between the films, is played by Robert De Niro.

Yet another connection is that both Rupert and Arthur have black romantic interests. When white men date non-whites, the natural presumption is that they are dating down out of insecurity [4], which makes sense given that both characters are losers. (In De Niro’s case, he actually had a child with Diahnne Abbot, the actress who plays his love interest. De Niro has fathered five children with three black women. One could be considered an accident, etc.) In Arthur’s case, his relationship with his neighbor, single mother Sophie Dumond, is imaginary.

Both movies also have a cartoonish scene in which we see Rupert and Arthur from a distance chased back and forth by security personnel.

The climax of Joker is when Murray Franklin invites Arthur on his show. At this point, Arthur is wearing clown makeup and wishes to be introduced simply as “Joker.” This is Arthur’s big break, but he is not interested in actually entertaining anyone. In truth, he lacks both the talent and the interest. Arthur’s laughter is merely a syndrome, a mechanical tic, unconnected to a sense of humor. The only laughs he gets on the show are by being socially awkward.

Arthur is entirely absorbed in self-pity. He confesses to killing the three yuppies, and claims to find it funny. Murray Franklin is appalled but challenges him to defend himself. Heath Ledger’s Joker could have said something interesting and plausible. But this Joker has only inarticulate bitterness and rage. Then he shoots Franklin in the head and shambles away, allowing himself to be taken into custody.

The dénouement of the film takes place in the immediate aftermath of the Joker’s arrest. The Leftist clown mask protests have turned into city-wide rioting. The police car transporting the Joker to jail is rammed by an ambulance driven by a clown protester. The injured Joker is lifted from the back seat and laid on the hood of the police car in a pose clearly drawn from Andrea Mantegna’s The Dead Christ and Three Mourners. Then the Joker/Christ regains consciousness/resurrects, stands up on the hood of the car, and draws a smile on his face with his own blood to the acclaim of the crowd. Our savior. 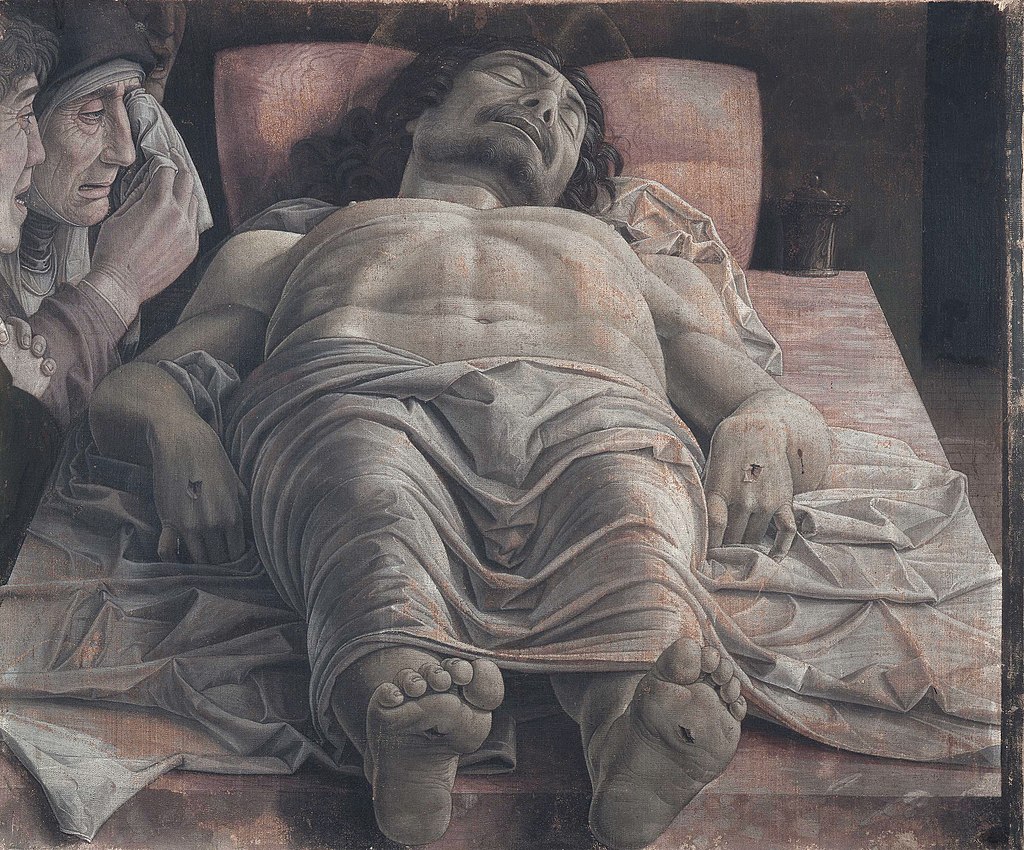 The movie ends, however, with the Joker in Arkham, explaining himself to another unsympathetic black social worker, then dancing down a sterile hallway, leaving bloody footprints, followed in cartoonish pursuit by orderlies.

But the last half of the movie might actually be one of Arthur’s fantasies, because at one point, Arthur empties out his mother’s refrigerator, climbs inside, and closes the door. Can people open refrigerators from the inside? Is the whole latter half of the movie a dying man’s fantasy? Is this another giant jerk-job like Lost? Is the joke on us, the audience?

I pray there is no sequel.

As a purely technical achievement, I would rate Joker 9/10. It is well-acted, well-directed, and well-paced. The urban settings are utterly hellish. The music by Icelandic composer Hildur Guðnadóttir is highly effective.

The simple truth is that Joker is a boring movie about a disgusting loser. Although there’s no accounting for taste or madness, I think those who fear Joker will incite incels to go on shooting sprees are wrong. I’m betting that the most savage thing Joker inspires is this review.