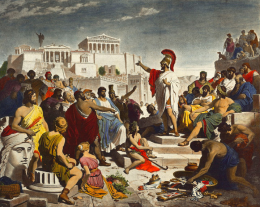 When the story of the late 2020s is written, it will have to address the phenomenon of National Populism. Due to a combination of several long-term and deep-seated factors, the people of the West started gravitating towards charismatic leaders cultivating popular and populist movements aimed at restoring the societies of the West to their former greatness. From the communal dream-state of a Trump rally, to the chaotic battleground of a Yellow Vest protest, the old-stock populations of Western states arose to challenge the corrupt and uncaring elite.

For what it’s worth, I think that the first chapter of this story has been already written and documented — read all about it here [2]. In his review of Eatwell and Goodwin’s surprisingly sober-minded work, our esteemed editor at Counter-Currents, Greg Johnson, counsels nationalists to put themselves out in front of the National Populist wave.

Now this is all well and good, and this National Populism thing looks like a winning combination (and we love winning, don’t we, folks?), and yet even in his counseling, Dr. Johnson anticipates a big obstacle in the way of our support of National Populism: namely, the elitism inherent in Dissident Right politics. Why should an avowed elitist, steeped in the tradition of Evola, Nietzsche, De Maistre, and Carlyle cavort with the unwashed masses, whose popular uprisings have been the bane of Western civilization, from the storming of the Bastille by a drunken mob to the blockading of central London by the Hermeneutic Order of the Broccoli Brain [3]? Populism? Harrumph! I furrow my patrician brows with disdain and flare my chiseled nostrils as my luxuriant mustache is sent aflutter.

It’d do us good to check our premises.

First of all, what the storming of the Bastille, the blockading of central London by the Green nutter gang, the American Revolution, the rise of Labour in the UK, the October Revolution in Russia, the New Deal, Occupy Wall Street, and any other violent uprising in the dog’s breakfast of Leftist revolutions are bourgeois uprisings against the traditional order, or what’s left of it. Indeed, the common folk were often victims of these revolutions, as the monstrosities of the Jacobins in the Vendée [4] attested. The common folk wanted throne and altar. The educated classes wanted their blood, even as they cried crocodile tears about the supposed iniquities the ancien régime had inflicted upon them. The common folk revered the Russian Tsar as the Little Father, an earthly representative of the Great Father in heaven, while the Bolsheviks disdained them as boorish, stupid, drunk, and smelly. And Lord knows what horrific slurs are bound to let loose from the pierced lips of the Extinction Rebellion lettuce-eaters about the rural bumpkins of the West Country, or those flatcap-wearing urban toughs oop norf. The revolutionary hates the peasant almost as much as he hates the King.

Secondly, if we take a closer look at the demands of the National Populists, we can see that they are not engaged in Leftism. Indeed, National Populism is a decidedly Rightist movement and can only be considered Leftist by cringeworthy cuckservatives who’ll have you believe that, uuuhhh, ekshully, Hitler was, like, literally a socialist.

We see a call for cleaning up corruption in the elites, where a Leftist mob would demand the abolition of elites as a phenomenon.

We see National Populists demand that measures be taken to secure an economic future for themselves and their posterity, whereas a Leftist mob would demand seizure of assets.

We see National Populists demanding that their voice be heard by the ruling elites, whereas a Leftist mob usually demands that power be given to them, under some clever euphemism like “democratic oversight.”

Crucially, we see National Populists demanding an end to replacement migration, whereas Leftist mobs are likely to act as accomplices of the elites effectuating this criminal policy (and indeed, this is what we see with the antifa phenomenon). Their admonitions against the elites are not the depredations of an upstart class seeking to install itself in power, nor a fantastical attempt to abolish the human pecking order.

The National Populists here are akin to the son demanding that his father renounce his alcoholism. He does not seek to upend the traditional power of the patriarch, but rather remind that patriarch of his rightful position, his responsibilities, and the family that depends on him. Even the much-maligned “socialism” of the National Populists is a call for a form of paternalism.

In a sense, these are common folk who recognize that they are common and are therefore crying out for their elite to treat them as commoners, which is to say, with paternal sentiment and noblesse oblige. In short, we do not see a movement of people who seek to seize power for their own designs, but a movement of people who seek to restore their country to good governance — the old-stock European people who wear red hats in America and yellow vests in France demand a reset, rather than a revolution [5].

An interesting situation is visible in the UK, where National Populist energies and fortunes seem tied to the pin-striped person of Nigel Farage, who, while definitely charismatic and eloquent, seems to lack the will to be a leader. Hence, the UK has not elected a National Populist government and is instead saddled with bog-standard Tory cuckery, courtesy of Theresa the Traitor and Boris the Buffoon.

That the National Populists leaders are constrained by a hostile government (and non-government) apparatus known as the Deep State has led the National Populists to hope for more authoritarian government, so that their agenda may be pushed through. Because they are normal, everyday people with no designs on political power, they would welcome a dictator, or better yet, an absolute monarch. Hence the many fantasies of God-Emperor Trump [6].

The blind devotion to Trump exhibited by some Americans, particularly older conservatives, has earned them the monicker MAGApedes, and indeed, were I not accustomed to the astounding lack of will demonstrated by the average person, I would have found myself severely creeped out by these people’s complete submission to Trump. Such veneration exists for “Santo Matteo” as well and doubtless for other National Populist leaders.

An image arises of a movement not out for the blood of elites, but for their own well-being, and for sanity in government. We see a people raising their voices and calling for leadership. What can we — the elitist, illiberal Right — do about that?

Why, answer the call, of course.

I suspect that if you’re milling around Counter-Currents, you’re probably part of your nation’s cognitive elite. This gives you bragging rights, but also responsibilities. You’ve been gifted with a big brain, maybe even organizational capability, maybe even innate charisma. In any case, you probably have more will than the average person, certainly more courage — it takes balls to read crimethink in this age of thought control. Are you wasting these gifts on dead-end careers? Are you wasting them on video games? Or are you pouring your energies into the reclamation of your future? Our nations cry out for our guidance.

Seek out your local National Populist organization, make every effort to join them, and help their advance. Do not compromise your positions, which I hope are nationalist and illiberal, but rather gradually introduce them to your new friends. Do not be hostile, but rather be a leader. Calmly and clearly articulate what is necessary.

The National Populist movement is fertile ground for our ideas. You’re not there to barge in and violently take over the movement, but rather to rise to its top on the basis of your merits.

Since you’re reading this, you are a Dissident Rightist, and therefore one of your narrowest specialities is exposing the mainstream Right for the ineffective cucks they are. This is a uniquely useful skill for a National Populist movement, since such movements grow by plundering votes and influence from the mainstream Right, as discussed here [7].

Or maybe there’s another way to be useful. I’m sure you can meme with the best of them. Why not apply those skills to leaflet design?

Have you any specialized training? Put yourself in the service of the movement, and the rewards of dedicated labor will follow.

Above all, remember that if you want to lead, your life is not quite your own anymore, but rather, it belongs to your mission, which is to say to God. Among the common folk, you’ll know what it means to be a true aristocrat, a prince grounded in the blood and soil of his nation, his fate intertwined with his people who cry out for his guidance in both the physical and the spiritual realm. I suppose that sounds scary, and I think the dangers are indeed great, but then again, I can hear my nation calling [8].

In a noble heart, the shame of inaction stings more than the fear of battle.