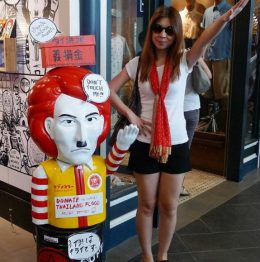 Our goal this year is to raise $100,000 in order to expand our efforts to build a metapolitical vanguard for White Nationalism. So far, we have received 300 donations totaling $62,448.79. We set our goals high because the task we have before us is formidable, but with your help, we will succeed. We want to thank everyone who has supported us so far. Please note that we are now again able to receive recurring donations and donations from credit cards outside the US.

On September 27, Counter-Currents posted a beautiful fundraiser essay by Donald Thoresen [2]. It is both appealing as a fundraising piece and inspiring as an individual essay. It resonates with us not only because it is written so naturally, sincerely, and skillfully, but also because it presents ideas and reasoning that are cogent, genuine, truthful, and convincing, thus striking a chord in the readers’ minds.

I am an ardent supporter of White Nationalism from East Asia, and also a passionate reader and fan of Counter-Currents from the beginning. I have also contributed my humble articles and financial donations in the past. About two months ago, I arrived in the United States for the first time in my life as a visiting scholar, and will stay here for the next ten months. After settling down at my host university and getting myself an American bank account, I immediately decided to make a recurring donation out of my meager monthly stipend.

Although the amount I am contributing is not much, it reflects my sincerest love and support for Counter-Currents. I humbly and earnestly call on all readers of this site to make your donation according to your own financial capacity. The cause championed by Counter-Currents is right, just, and urgent, and the stakes are inestimably high.

In the case of my own support for White Nationalism, and for Counter-Currents as its best and most remarkable intellectual beacon, my considerations actually stem from two perspectives.

First, I value, admire, and cherish the existence of the white race, with its unique and peerless civilization and its brilliant accomplishments in science, technology, the arts, and all the other significant fields of human endeavor one can name. And I hate to see the great white people being degraded, atrophied, displaced, and dispossessed in their ancestral homelands while their intrinsically superior civilization, culture, and institutions are being vitiated, vilified, trashed, and demolished by the unholy alliance of vile and impudent racial minorities, parasitic alien invaders, and perfidious white traitors.

What is happening in the US and other white countries is simply not right, just, or natural. It is a travesty, iniquity, and turpitude of the most wicked, treacherous, and outrageous kind that simply cannot be tolerated. I viscerally feel this both in my conscience and in my conviction, even being non-white myself – albeit a rare case of an informed and enlightened one. Thus, I feel it incumbent to throw myself into the maelstrom and do my best part in this great racial-historical struggle to defend and preserve the natural and existential rights of the white race and to secure its ultimate racial and civilizational survival, restoration, and revival in its birthplace in opposition to its multifarious enemies, both foreign and domestic.

Second, if the Jews – with their humungous finance-media-education complex, pathological ethnomasochistic whites as their collaborators, and the minorities and immigrant invaders as their foot soldiers – are the worst enemies white people face from within, the most dangerous external enemy, according to my own knowledge and insight, is China: the single most ruthless, ambitious, far-sighted, astute, disingenuous, and aggressive adversarial power in the world today. It alone both wants and is capable of mounting a genuine challenge and posing an existential threat to the white world from without. The hard facts are piling high, and every inquisitive and perceptive person has no trouble finding proof of this both on the Internet and in real life (as well as in my own articles on this site [3]), so I will not discuss it in great detail here.

But it is at least in this particular and hypercritical field that I believe President Trump, for all his flaws, is doing a very good and necessary thing with his tough trade policies on China. They are justifiably – albeit still insufficiently – punitive of China’s acts of blatant and rampant theft, deception, and duplicity, and they protect America’s national security, vital industries, assets, technologies, and the fundamental interest of the white middle and working classes. Together with his former chief adviser Steve Bannon and present trade adviser Peter Navarro, Trump and his team, for the first time since the 1980s, has torn off China’s mask of deceit and penetrated its thick hide to expose its true colors, and they are doing a great service to America’s workers and farmers.

China has been painstakingly working for more than three decades toward the ultimate purpose of defeating, subjugating, and even conquering and enslaving America. It does this through its money and technology. Possessing seemingly unlimited money, China buys political influence and positive media coverage in the West, suppresses and silences critics, bribes corrupt Western leaders like Clintons and Biden, and acquires even more Western high-tech which it can then use to expand its industrial and military strengths with the aim of overturning the West’s preeminence in the long run.

Chinese money and technology mostly derives from its trade with US and the West more generally. In light of this undeniable fact, the only decisive solution to the Chinese menace is a total and irreversible disengagement of the Western world from China in a comprehensive and conclusive manner: a complete severance of all existing economic, commercial, technological, and interpersonal contact and exchanges. This is because even if the US succeeds in pressuring China into a “fair” bilateral trade relationship, it will still be able to amass enormous and ever-growing wealth through continuing trade, and sooner or later, it will use its increased power and wealth against the US and the West.

Besides American-Chinese trade ties, another salient and appalling act of sheer suicidal stupidity on the US side is that it continues to allow hundreds of thousands of ethnic Chinese to come and settle for various purposes, ranging from students, scholars, and researchers to scientists and technicians – not giving any of them rigorous background or loyalty checks. On par with the Jews, the Chinese have been historically notorious – and deservingly so – for being disloyal to their host countries, and for always harboring an ethnocentric complex which propels them to milk their host societies and pass their gains back to the homeland, in spite of their superficial image of being well-behaved, law-abiding citizens.

The current Chinese regime only knows too well how to capitalize on such imprinted ethnic traits among its compatriots overseas, and has been constantly and actively recruiting ethnic Chinese in America from all walks of life to act as spies for China. Many of them invariably fall for the lure of the Chinese regime and take orders from it, stealing the cream of America’s best intellectual properties and technologies – from AI to military equipment and software – for China’s benefit. In the meantime, tens of thousands of Chinese students who are graduating from America’s elite universities and top research institutes return home with intimate knowledge of America’s cutting-edge knowhow, unobstructed and unexamined, to contribute their knowledge and skills to China’s ultimate objective of outstripping and defeating America.

If the whites of North American are to emerge unvanquished and victorious in a future life-or-death confrontation with China – which the Chinese will initiate whether whites want it or not – all these senseless and self-destructive follies must be halted as soon as possible. America must stop being the supplier of money and technology and a talent incubator for China, which is hell-bent on beating and subduing America and whites in particular. Let me repeat: Disengaging from China thoroughly and completely is the sole meaningful solution to the Chinese Question.

President Trump is the first American leader in half a century to shine a spotlight on this critical topic, and is doing fairly well at resisting and countering China’s onslaught – but his measures are far from enough, and are inevitably compromised by factors such as his family members’ ethnic and financial ties with the panda-hugging international high finance and large corporations. These have predictably lobbied and swayed him to relax his approach toward China, as demonstrated by his latest wavering and softening on the crucial fronts of tariffs and the Chinese mega-firm Huawei.

Thus, I am convinced that only a future White Nationalist state in North America, and a White Nationalist Western world, possessing a principled and unfaltering racialist metaphysical worldview, a staunch anti-globalist and anti-mercantilist philosophy rooted in white independence and sovereignty, unbending and unrelenting White Nationalist mettle, and an accurate understanding of the history and reality of the Chinese Question will be able to do what is necessary to defang and declaw the Chinese dragon that has already half-sunk its teeth into the flesh of the white nations.

I support and donate to Counter-Currents in order to protect and preserve the splendid white race and all that her splendid civilization has produced, and to combat and overcome her internal and external enemies. How about you?