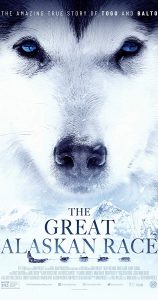 It’s always nice when a film presupposes that empathy is a universal human trait. Films that do this rarely go much beyond being merely nice, however. They tend to cling to their PG rating and their predictable story arcs until the obligatory uplifting ending. There is good in all of us, and if we’re just honest with ourselves and God, redemption can appear almost like a present at Christmas. True as this can be, stories that use inherent human goodness to push a plot tend to preclude the most painful – and therefore most meaningful – forms of conflict. Only kids believe in Santa Claus. Only the naïve buy into contrived happy endings wherein God steps in to set things right. Do these sorts of things happen in real life?

Why, yes they do. The Great Alaskan Race tells such a story, and so has a chance of being one of those feel-good movies that goes beyond being merely nice. It’s uplifting, yes – but also riveting and real.

Written, directed, and starring Brian Presley, The Great Alaskan Race tells the incredible story of the 1925 Serum Run to Nome [2] in which twenty mushers and one hundred and fifty sled dogs delivered diphtheria antitoxin to the isolated subarctic town and saved it from a deadly epidemic. The story opens seven years earlier, when Leonhard Seppala (played by a rugged and taciturn Presley) buries his Inuit wife during the influenza epidemic which was ravaging the town. He’s left with his infant daughter Sigrid. Cut to 1925, and the widower Leonhard seems to be in the same rut, spurning the affections of Constance, the local doctor’s daughter, and raising Sigrid (played by Presley’s real-life daughter Emma) in strict, humorless fashion.

Then the epidemic hits, and the kind and avuncular Doctor Welch (played by Treat Williams) is quickly overwhelmed and worried that all the children in Nome are vulnerable. He calls the Mayor, who then calls the Governor. As the Governor contacts all the hospitals on the western seaboard for whatever antitoxin they can spare, the Mayor holds a town council. With the ocean frozen over, extreme winter storms expected, and airplane technology still too shaky to be relied upon, the council decides on mushing the medicine in from the train depot in Nenana, 674 miles away. Normally, the mail takes twenty-five days along that route. Nome needs the medicine in less than a week or nearly all the children there will die. Seppala agrees to be one of the mushers, and realizes that he has something personal at stake when Sigrid falls ill as well. In the end, he heroically covers ninety-one miles, almost forty more than any other musher, and helps deliver the medicine in time.

So, there’s your story: The classic Man vs. Nature match up, with Nature seemingly having an insurmountable edge at the onset. And the stakes couldn’t be higher. In order for Man to win this ancient and deadly struggle, all the mushers have to be on board with the program, which requires Herculean efforts, Christ-like suffering, and St. Francis of Assisi-levels of altruism and love for animals (or, in this case, sled dogs). This is not a story about characters. Under extreme circumstances in which the goal is to survive, character differences thin to insignificance. They all want the same thing, and they all want it desperately. Aside from Seppala, nearly all the white male characters in The Great Alaskan Race are interchangeable, differing only in the mannerisms of the actors portraying them. They all care. They are all filled with Christian goodness. And they will all do whatever it takes to save those children.

Once you accept these parameters and the fact that the film’s PG rating means that children as young as 8 are expected to be in the audience, The Great Alaskan Race becomes a thrilling ride. The film’s technical flaws become less important than the heart it evinces. You’re not going to find many films with greater heart than this one.

And what are its flaws? I count four:

The film employs a newsreel-like narrative device in which a radio announcer describes the goings-on to a national audience over black-and-white footage. It’s not a sophisticated conceit, but it’s easy to get used to once you realize that children will appreciate the exposition, and to them the device will seem novel.

The film is also somewhat liberal in its Christian imagery. Especially in the hospital scenes, we’ll often see Welch or Constance worrying over the dying children with a big cross on the wall behind them. The Great Alaskan Race is Christian in character but not in purpose. There are no overt calls to convert, no eulogies to Jesus, no references to scripture. Yet the film makes no attempt to hide that its characters, even the Indian ones, are Christians behaving according to the tenets of Christ. In a sense, the film is so confident of its Christianity that it doesn’t even try to sell it. The fact that the Serum Race to Nome actually happened and that Presley takes little dramatic license in retelling the story lets the story’s Christianity sell itself.

It must also be said how white the cast and characters are. Indian mushers did take part in the Serum Race and get a little screen time here. But mostly The Great Alaskan Race depicts the kindness, heroism, and sacrifice of white people. Dr. Welch cares for the Inuit children as much as for the white ones, and once the medicine arrives, he prescribes it to an Inuit child first because she was the most afflicted by the disease at that moment. As a white identitarian, just knowing that people like me didn’t think twice about risking their lives to save a handful of children at the edge of the world is frankly inspiring. For an implicit pro-white message, you cannot get much better than this. It’s home cooking, yes. But it still tastes good.

Other high points include Presley’s visceral performance and a terrific cameo by James Russo as musher Wild Bill Shannon. In a show-stealing scene, Shannon describes in gory detail the lethal dangers of mushing at either forty above or forty below. Seppala’s love for his lead dog, Togo, also plays a part in the story when Nome’s Mayor tries delicately to convince Seppala not to take him. Togo is 12 and perhaps too old for such a trial. Seppala ignores the Mayor, however, and sticks with the dog he knows and loves (and who did survive the ordeal). I would have liked to have seen more human-dog interaction in The Great Alaskan Race, but what Presley gives is certainly sufficient for the story. The film also benefits from its short scenes and action-movie pacing once the race begins. This effectively builds suspense and excitement, but also (it has to be said) minimizes some of the hokier aspects of the story, such as Welch and Constance weeping over the dying children as they wait for the medicine.

Still, the love is real. The love and loss are effectively rendered by the actors, and watching Welch deliver bad news to an Inuit family is as difficult as it would be in real life. Their jubilation in the end when the medicine finally arrives is just as moving. Also moving is the film’s deliberate naïveté. When all ends well, the Alaskan Governor receives a call from President Calvin Coolidge. The childlike excitement he and his staff express over receiving a call from the President of the United States shows how different a time it was compared to today. It makes one long for the days when the United States was a much more cohesive nation than it is now.

The Great Alaskan Race is by no means a great film. It lacks cinematic vision, and its technical drawbacks are hard to ignore. So is its rather insipid title. But what isn’t hard to ignore is the film’s heart. Sure, it’s bolstered by a great, true-life story. But Brian Presley keeps the best parts of it intact and delivers the genuine uplift we all crave by the film’s end. This is something, I believe, young audiences will appreciate the most. Also, the way Presley handles Seppala’s near-death experience in the end may not be terribly original, but it is life-affirming and powerful. It speaks to the parts of us that are not jaded to the tricks of cinema and wish to be reminded every once in a while that life is indeed good and worth all the sacrifice.

Spencer J. Quinn is a frequent contributor to Counter-Currents and the author of the novel White Like You [3].