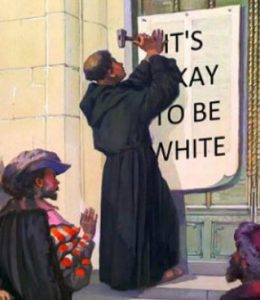 The majority of America is no longer Protestant, with forty-three percent claiming Protestant affiliation. In 2007, it was fifty-one percent. These people are not becoming Catholics, as the number of Americans who submit to Rome has declined to twenty from twenty-four percent in 2007. The majority of America also doesn’t regularly attend church anymore; just forty-five percent of respondents say they attend at least once a month.

This secularization trend is most pronounced among the young. A thin majority of millennials do not identify as Christian, and only thirty-five percent of them attend church at least once a month. One can easily imagine Christianity’s further decline among Generation Z.

These poll numbers shouldn’t surprise observant readers. For years, fewer people across the West have stopped attending church and stopped identifying as Christian. America was once seen as the exception to this development, but that’s no longer the case.

The Dissident Right should take note of this study and remind ourselves that we must keep our message secular. We limit ourselves if we insist on explicitly tying our movement to Christianity. That’s not to say that Christianity’s decline is a good thing. It’s just a fact that we have to recognize. Like Nietzsche saying “God is dead,” this is not cause for celebration, but a demand to move on and create something new.

Some within our ranks argue that we have to return the West to God and Christianity, and that this is inseparable from our cause. This argument requires identitarians to become zealous Christians – particularly Catholic – and expel all the pagans, atheists, and heretics from our ranks. Christian imagery and messages must inform our rhetoric and we must fight for causes that are not related to preserving our identity, such as abortion.

I have previously argued [3] that this is a misguided idea because every Christian institution is hostile toward identitarians and would sooner become a mosque than ally with us. Most Christian institutions actively promote open borders, Third World overpopulation, and anti-nationalism. They are not our friends and they will only come to an understanding with us when we grow in power and influence. Identitarians are not there yet.

But even if there were some Christian institutions that weren’t hostile to us, we would still alienate many potential followers. The devoutly religious are older; those who are not are younger. We want to reach the young, and the average Zoomer is not going to be won over by heavy-handed religious lectures. They’ve already lost interest in the faith, or were never even raised in one. “Racists” telling them that they’re damned to hell if they have sex before marriage isn’t a winning pitch.

The Christian faiths that most appeal to the Dissident Right are usually outside the mainstream. There’s nothing wrong with that, but it would add to our “kookiness.” The Dissident Right’s racial views already put it outside of the mainstream; adding quasi-sedevacantism or Orthodox fundamentalism only further ghettoizes it.

Of course, our personal choice of faith should not be based on optics or what appeals to the masses. You should choose the faith to which you feel attached, whether by tradition or personal choice. But, as a movement, we have to understand that traditional Catholicism and Orthodoxy are alien to most white Americans. They’re also communities that will not accept association with our racial views and will easily condemn us if we became too tied to their faith.

If we wanted to appeal to a wide constituency, it would be smarter to adopt evangelical Christianity than traditional Catholicism. White evangelicals are the most likely to support [4] immigration restrictions and tough enforcement of immigration laws. Eighty percent of them voted for Trump. A majority of them [5] say mass immigration threatens the historic American nation and that a majority-minority America is a negative development. White Catholics are less likely to hold these views.

But few on the Dissident Right find Evangelicalism appealing due to the Christian Zionism, tacky aesthetics, and silly denials of science. Younger and less religiously-inclined whites find Evangelicalism the most unappealing form of Christianity as well. We would appeal to a certain demographic, but few identitarians are Evangelical, and we would turn off the demographic most open to our cause. We want young, smart, and “hip” whites. Identitarian Evangelicalism would not accomplish that task. Additionally, the Evangelical institutions would rush to disavow us just as quickly as the Catholic Church and Orthodox bishops have.

This new survey should also disabuse integralist conservatives of their fantasies. Integralists [6] are “post-liberal” conservatives who want the Catholic Church to have a greater role in state affairs. They believe the time for liberal conservatism is over and the Right’s future depends on submission to Rome. The integralists, like New York Post opinion editor Sohrab Ahmari and the staff of First Things, make good points about Conservative Inc. and the need for something new. Nevertheless, they are firmly cucked and melt down over sensible racial views. Some of them even want open borders in order to flood America with “good Catholics” from the Third World. However, the numbers show that mass immigration won’t create the Catholic imperium. A majority of Hispanics are no longer Catholic, and only a slim majority (fifty-one percent) attend church monthly. That’s not quite the devout masses the integralists promised who will replace the WASP heretics.

Many integralists claim that the young are returning to traditional religion, when in reality they are turning away from religion altogether. Their aversion to race means they won’t address the real issues, and they’ll try to redirect the Right’s energy away into frivolous matters. It won’t appeal to Middle America – but on the plus side, it won’t cost its advocates their jobs either. It will be the respectable – yet harmless – alternative to the Dissident Right.

That’s why it’s best to maintain a secular position. We’re not anti-Christian, militant pagans, or anything like that. We simply emphasize what unites right-thinking whites over what divides us. Not everyone has the same faith or religious views, and most younger whites are now areligious. The lack of religion and anomie in modern America will lead them to consider identitarianism. Our message should be tailored for these young souls, not hitting them over the head with diatribes about the satanic nature of Vatican II.

All whites who believes that we should assert our ethnic interests and take back our birthright should be welcome in our movement, regardless of creed. Our fight is a secular struggle, not a religious war. We should appeal to as many whites as possible. Christian zealotry won’t do that.